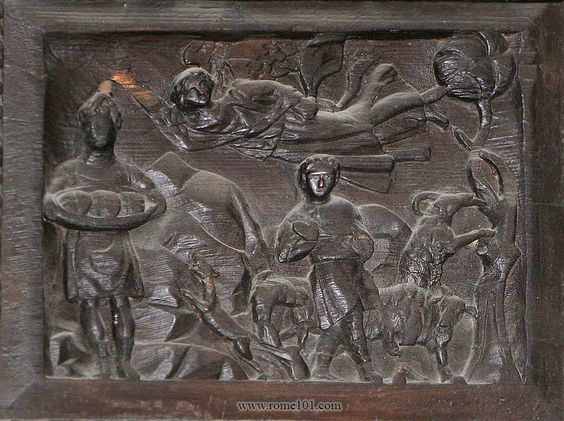 Habakkuk is a surprisingly Dominican minor prophet: his image appears twice on the fifth century wooden doors of Santa Sabina, one of our convents in Rome, and home to the Master of the Order.
The first appearance is with the prophet Daniel where the angel of the Lord takes the prophet Habakkuk from Judah to Babylon, to feed to Daniel, so as to sustain him in the lions’ den, the pottage he had prepared for the reapers in his field (Daniel 14:33-39). The second image shows Habakkuk standing at the Nativity, an allusion to Habakkuk 3:2 which, when rendered in a particular way, has the Lord appearing between two beasts, the ox and ass identified by Isaiah 9:6. So ubiquitous was this symbol in the early Church that some sarcophagi omit Mary and Joseph all together, favouring the image of our Lord nestled among the beasts of the stable. The image was still popular in the Middle Ages, and a very beautiful thirteenth century parchment from a psalter made at Würzburg places Habakkuk and Isaiah together. The latter holds the scroll with the text of Isaiah 9:6, while the former stands holding a scroll the text of Habbakuk 3:2.But how do these stories and prophecies all hold together in such a short book of just three chapters? Part of the answer comes from the nature of the minor prophets themselves. Treated as a group of twelve, the first six (Hosea – Micah) are cries of outrage at the iniquity of the world, whereas the second set of six (Nahum – Malachi) all in their own way try to offer some kind solution to, or explanation of, that iniquity. For Habakkuk the answer to the problem is to have faith, and to live by this faith until the justice of God is made manifest at the end of time. Like many of these prophetic works, Habakkuk’s prophecy was written at a time of great social strain. Indeed, he wrote it during the reign of Manasseh (687-642BC), the worst of the kings of Judah according to 2 Kings (21:2; 9; 11; 16; 23:26). Habakkuk protests to God in a way that might be familiar from the Book of Job, constantly asking what God will do about the wicked. Edward Pusey, the nineteenth century Oxford Hebraist, saw Habakkuk, whose name means ‘embracing’, not only as one who contends with God, as Jacob did in Genesis, but as one who embraces and cares for his nation. With images which speak with such honesty about injustice, and the consolation that is promised by the displays of God’s awesome power at the end of time, it’s hardly surprising that the text has a rich history in the liturgy. It’s used in the current Divine Office as a canticle at Lauds, but was also prescribed by St Ambrose for use at Requiem Masses, and the image of all creation falling silent at the presence of God (Habakkuk 2:20) inspired the composer of the Orthodox Liturgy of St James, which, in turn, was rendered into English as the hymn Let All Mortal Flesh Keep Silence.

However, it’s at the beginning of Chapter Two that the text’s many themes come together in God’s reply to the complaints of Habakkuk, who stands at the watchtower awaiting God’s answer, a text that St Gregory of Nazianzus uses as the basis of his Easter Oration. Even if the vindication of the Lord is slow in arriving, we must wait in hope, for the righteous live by faith, and the evil will not abide. Our faith in the Lord has to be powerful, yes, because often the injustice and iniquity around us is so great that we want to cry out in righteous anger to the Lord against the iniquitous. But even when the odds stacked against us seem so great, still God works His purpose out, and is true to His word. Habakkuk wrote his prophecy just before the deportation to Babylon, and even after the deportation, which was such a disaster, Habakkuk became an instrument to save the righteous man Daniel from the lions’ den, and saw in his ecstatic vision the promised Messiah born in the poverty of the manger.