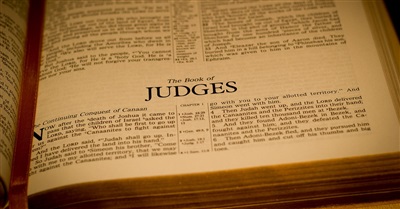 The Book of Judges covers the span of Israel’s history from the death of Joshua, after the conquest of the Promised Land, until the establishment of the Kingdom. There is no unified leadership in the nation at this time, and each man owes his allegiance to his tribe and family rather than to a central authority. The tribes of Israel seem to fight just as often with each other as with the surrounding Gentiles, and only occasionally do they federate to fight back a foreign oppressor.
The men and women who emerge to lead Israel in such desperate moments are referred to as ‘Judges’, and give the book its name. Their stories are loosely woven together, reflecting the fragmented nature of Israelite society at the time: some of them are better known, such as Samson, who fights against the Philistines, but is ultimately vanquished himself by Delilah, others less so, such as Jephthah the Gileadite who sacrifices his daughter in fulfilment of a vow.
Like in many of Israel’s darkest and most desperate moments, the Book of Judges constantly reminds us that God’s salvation of his people often comes from the least expected places. A good example of this is the account of the war against the Canaanite leader Sisera, recounted in Chapters 4 and 5. After Deborah the prophetess and Barak defeat Sisera on the battlefield, he is killed during his flight by Jael, “the wife of Heber the Kenite”. As Deborah had prophesied to Barak, “the road on which you are going will not lead to your glory, for the Lord will sell Sisera into the hand of a woman”. The Song of Deborah, which recounts these events after they have happened, is possibly one of the earliest verse passages found in the Bible. Deborah is disparaging of the courage of the men in Israel: “Was shield or spear to be seen among the forty thousand in Israel?” But despite this, God is ready to work to the salvation of Israel and the glory of His name; and it is not some powerful warrior, but a simple tent-dwelling woman, through whom he does so.

Over three millennia have passed since the events recounted in this book, but as an inspired text it never ceases to be relevant to God’s people. To us, Deborah’s story is a reminder that God continues to be present in His creation, working for our salvation, even after He has redeemed us by His son’s blood. So in the dark and desperate moments of our own lives, let us trust that He does not abandon the afflicted: just as His angel says to Gideon, “Peace be to you; do not fear, you shall not die.” Jg 6:23.