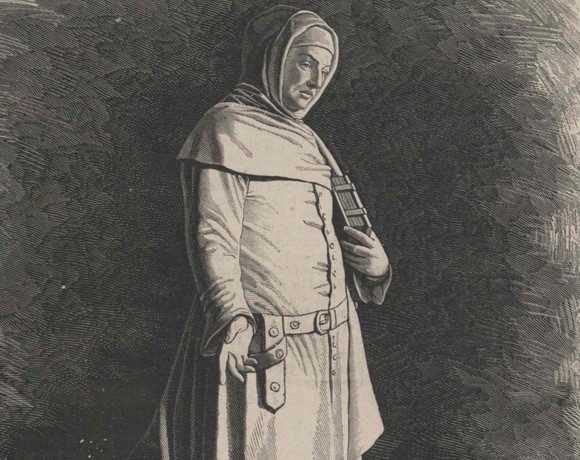 No escape from sacrament

Like many others, I have set myself the ambitious challenge – perhaps too ambitious – to read a few books during lockdown; quite a lot of Augustine, a couple of shorter novels. But after I returned from isolation after a trip abroad I picked up Boccacio’s Decameron. Noticing that the copy in the library was inscribed with the name of none other than Herbert McCabe, OP, suggesting that I had good company in my reading choice, I sallied forth.

That was just about a month ago, and I must admit that, at the moment, I haven’t got all that far. This isn’t surprising given how thick the book is, but the basic story is seven women, accompanied by three men, leave plague-stricken Florence for better air in the country. Eager, however, to retain some sense of dignity, they stay at a villa (accompanied by their servants) with a decent wine cellar and nice grounds. Having settled in and gone for an initial walk around the grounds, one of their number, Pampinea, sets herself up as leader and outlines the rules for their time at the villa, and mandates that each of their number must tell a story each of the ten days they are resident. The stories can be profane in places, but they seem to encompass all human life from the heights of virtue to the depths of vice.

But isn’t this all a bit of a naively bucolic scene? Well in some sense, yes. But there’s also some good advice there and Boccaccio’s work inspired, or was perhaps inspired by, a number of pieces of contemporary medical advice. The Florentine physician Tomasso del Garbo suggested that at times of pestilence, people should gather in a garden and “use songs and games and other pleasant stories that do not exhaust the body, and all those delightful things that bring comfort.” To be honest, this shouldn’t surprise us as Catholics, and it’s perhaps one of the reasons why Catholics might be better placed to weather isolation than others. Our Scriptures include stories and songs, and in fact St Paul tells the Christians in Ephesus to address one another in psalms, hymns, and spiritual songs, singing and making melody to the Lord with all their heart (Ephesians, 5:19). We friars do this everyday as at our scheduled times of prayer we stop whatever we’re doing to go to church to sing the psalms together.

Part of the point of singing and the reading, other than the praise of God, is to remind us of our end in God; to keep the contemplation of divine things constantly before our mind. That perhaps shows why Boccaccio’s image of ten people living in a villa is perhaps unrealistically bucolic, for his stories are at root about skewering statesmen and churchmen for their hypocrisy and perhaps having a bit of a laugh along the way. Of course the psalms themselves are full of this hatred for the hypocrite, the liar, the fool, and the blasphemer. Even after the gentle excisions of the liturgical reforms of the last century, the voice of the psalmist can be heard feeling joy and delight in the fall of the wicked.

But what really makes the difference? Why are we in our homes so different from Boccaccio’s ten story tellers? Other than the absence of domestic staff and an Italian villa, the answer surely is what we’re aiming for. While those around us might seek entertainment, we should seek something deeper. In our current situation we are not like Boccaccio’s story tellers, because our focus in our stories and songs is God. This is why what we do over these days makes so much difference; for the way we spend our time, what we do and love, testifies to our ultimate end.

Because God created us in His own image, he also created us to make images, either by physically crafting them in sculpture or drawing, or by making images from words in poetry and prose. For David Jones, this was written into our very being:

A man can not only smell roses (some beasts may do that, for lavender is said to be appreciated in the Lion House) but he can and does and ought to pluck roses and he can predicate of roses such and such. He can make a signum of roses. He can make attar of roses. He can garland them and make anathemata of them. Which is, presumably, the kind of thing he is meant to do. Anyway, there’s no one else can do it. Angels can’t nor can the beasts. No wonder then that Theology regards the body as a unique good. Without body: without sacrament. Angels only: no sacrament. Beasts only: no sacrament. Man: sacrament at every turn and all levels of the ‘profane ’and ‘sacred’, in the trivial and in the profound, no escape from sacrament.

Of course Boccaccio sees the world as one of meaning, it’s not that his stories are entirely shallow or superficial, but, as Flannery O’Connor said, the truly Catholic imagination reads the world around us in a way similar to the allegorical reading of Scriptures or the clear sighted vision of the prophets. Ultimately this means seeing the world as something with sacramental meaning, something which points beyond this world. Pampinea and her friends are focus entirely on this world, and in some sense mock not just the sacraments, but something of the very reality of the world. These days of lockdown might help us to once again rediscover the truth of the words of David Jones: ‘…at every turn and all levels of the ‘profane ’and ‘sacred’, in the trivial and in the profound, no escape from sacrament.’