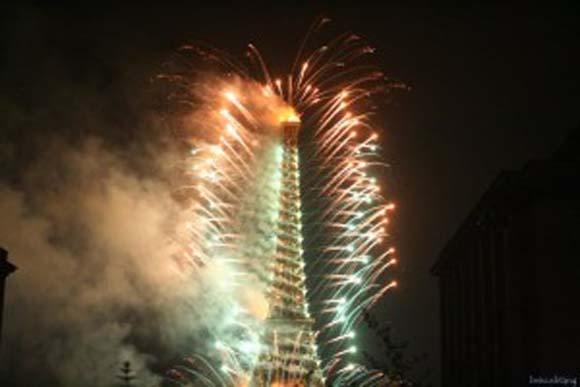 Why is the beginning of a new year marked with so much noise? All across the world the standard way of marking the end of the old and the beginning of the new year is for people to set off fireworks, tearing apart the night sky with a blaze of light and an explosion of noise. The Romans have been at this for a long time, believing that the turning of the year was a vulnerable moment, a changeover that had to be watched carefully lest witches, ghosts and demons slip through the gap between the years and get up to all kinds of mischief. The antidote, they believed, was to make as much noise as possible, to scare away any wandering demon, ghost or witch who might think of trying to slip through that gap. To this day Rome at the end of the year is the noisiest place on earth. The only ghosts who could possibly slip through there are the ones who are profoundly deaf.

Strange to think that sophisticated cities like Sydney, Paris, London and New York continue to mark the turn of the year in this primitive way. Ten years we passed not just from one year or decade or century to another, but from one millennium to another. Remember how, as the year 2000 approached, there were so many articles, programmes and films on ‘apocalyptic’, end-of-the-world themes. The feared catastrophe of the Y2K computer superbug was perhaps a secularised version of the fear the ancient Romans knew: something mysterious may slip through at the changeover and wreak all kinds of mischief. A number of films appeared at that time about demons insinuating their way into our world and its affairs. And there were some groups and individuals who felt that the world itself might come to an end with the great cosmic battle of Armageddon getting under way.

The origins of ‘apocalyptic’ thinking are in the Bible. The ten plagues of Egypt recounted in the Book of Exodus as well as the later prophecies which we still value and read — for example Ezekiel, Daniel and Zechariah — are the sources of apocalyptic imagery: horsemen, chariots, fire, floods, the world being turned upside down and inside out, the earth disappearing beneath our feet, the stars falling from the sky, strange beasts appearing — all that. Jesus himself preached in apocalyptic terms about the destruction of Jerusalem, the meaning of his own death, the breaking in of the kingdom of God and the return of the Son of Man on the clouds of heaven surrounded by the angels.

It seems natural that our response to this kind of imagery should be a mixture of fear and hope. On the one hand we will want to keep it at bay, fingers crossed that if the ‘great and terrible day of the Lord’ is to come — as we believe it is — that maybe it won’t be for a while yet. On the other hand why are we not simply filled with that ‘joyful hope’, for which we pray at every Eucharist, at the prospect of the return of our Lord? 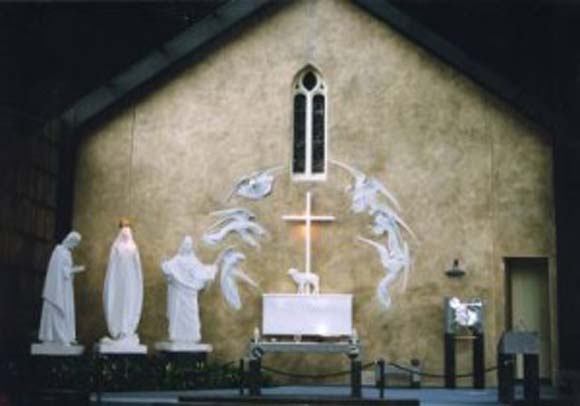 There is one very striking change in apocalyptic imagery as used by Christians. The Book of Revelation, the ‘Apocalypse’, places at the centre of the great battles and disturbances of the end time, the figure of a lamb, ‘a lamb that seemed to have been sacrificed’ (Revelation 5.6). This Lamb unlocks the secrets of the future of the world (Revelation 6.1). The Lamb stands on Mount Zion at the head of those who have been faithful to him (Revelation 14.1-5). The final battle with evil, sin and death is followed by the wedding feast of the Lamb (Revelation 19.9) and heaven is described as the new Jerusalem, a city whose only light is the glory of God and the Lamb (Revelation 21.23). It is a strange contrast, between the violent, aggressive and seemingly powerful armies of wickedness and the gentle creature who in fact holds the key to human history and whose sacrifice is the victory of God and of God’s people. (The apparition at Knock, County Mayo, in 1879 was not just a Marian apparition, it was an apocalyptic vision with the Lamb at its centre, see illustration above.)

The smoke of fireworks drifts away and the memory of their brightness and loudness fades. But the primitive fears, which they help us forget for a moment, remain. By contrast we continue in hope to follow the Lamb, a creature infinitely gentle, not aggressive, not violent, and yet infinitely more powerful than weapons with all their noise and clamour. The sacrifice of the Lamb — his death for love — is the most powerful moment in human history and the key to its meaning. In the Church we keep the memory of that moment alive each day, knowing that it is the source of any real strength we may have. With John the Baptist we continue to ‘stare hard’ at Jesus Christ and to say ‘look, there is the lamb of God’ (John 1.35).