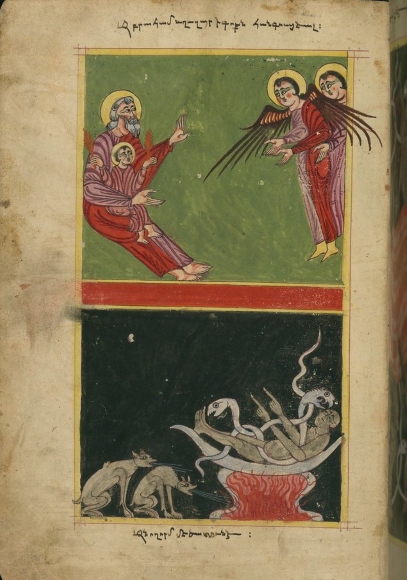 ‘Not even if a man should rise from the dead…’

By Br Bede Mullens, O.P. | ‘Jesus is the heir to a line of rejects: his rejection authenticates his mission, and in fact facilitates it. For Jesus, when he is rejected, is thrown out among all those classes of born-rejects that Lazarus embodies.’ Br Bede meditates on today’s Gospel, the parable of Lazarus and Dives.

Jesus said to the Pharisees: ‘There was a rich man who used to dress in purple and fine linen and feast magnificently every day. And at his gate there lay a poor man called Lazarus, covered with sores, who longed to fill himself with the scraps that fell from the rich man’s table. Dogs even came and licked his sores. Now the poor man died and was carried away by the angels to the bosom of Abraham. The rich man also died and was buried.

‘In his torment in Hades he looked up and saw Abraham a long way off with Lazarus in his bosom. So he cried out, “Father Abraham, pity me and send Lazarus to dip the tip of his finger in water and cool my tongue, for I am in agony in these flames.” “My son,” Abraham replied “remember that during your life good things came your way, just as bad things came the way of Lazarus. Now he is being comforted here while you are in agony. But that is not all: between us and you a great gulf has been fixed, to stop anyone, if he wanted to, crossing from our side to yours, and to stop any crossing from your side to ours.”

‘The rich man replied, “Father, I beg you then to send Lazarus to my father’s house, since I have five brothers, to give them warning so that they do not come to this place of torment too.” “They have Moses and the prophets,” said Abraham “let them listen to them.” “Ah no, father Abraham,” said the rich man “but if someone comes to them from the dead, they will repent.” Then Abraham said to him, “If they will not listen either to Moses or to the prophets, they will not be convinced even if someone should rise from the dead.”’

The parable we have just heard is a topsy-turvy re-telling of Charles Dickens famous story A Christmas Carol. The rich man is a Jacob Marley figure, who in his post-mortem torment has seen the error of his ways and, though he may not now be able to help himself, would at least like to help his friends and relations who are still on earth, just as stinking rich and just as stinking ungenerous as he used to be. Only, the visitation of this Jacob Marley to these Ebenezer Scrooges is aborted before they have even the chance to feel the discomfort of an ill-digested potato, let alone the pangs of madly philanthropic repentance.

Our Lord, for all that he calls people to repentance, is often doubtful that it can actually happen. ‘If they do not harken to Moses and the prophets, then they will not believe even if a man should rise from the dead.’ At Nazareth he had said plainly that a prophet is not received in his own country; before now, he has to give a sign at the Pharisees’ behest. Jesus’ scepticism in fact permeates the Scripture. The rich man, dressed in purple and fine linen, looks like a leading figure, and might remind us of the Pharaoh in Exodus: God sent Moses to him in signs and wonders, knowing full well that Pharaoh would harden his heart.

Truly, ‘the heart is deceitful above all things, perverse too: who can pierce its secrets?’. Why the pessimism? At one level, we are dealing with a strange fact of human nature. Ask yourself – why are you here? Why should you believe when others don’t? Ultimately, it wasn’t anything that you did; it happened, and at some point you began to go along with it. ‘I was brought up in a Catholic family’, you might say, or I met so-and-so or I read this and that – and that’s all well and good, those may have been the occasions; but who is to say that you might not have rebelled, rejected the gift, hardened your heart? Many, alas, do. And if our belief is in its origins apparently so fragile and inexplicable, we should not be any more astonished at wickedness and unbelief. Does it make sense to as someone, ‘why do you so stubbornly refuse to heed the Gospel?’. Would that question make any sense to the unbeliever? Did Jesus make sense to the Pharisees?

God alone searches the heart and probes the loins, and we leave that to Him. In Israel’s history and Jesus’ ministry, the hardness of heart and the rejection of God’s mercy have a purpose: he is meant to be rejected, as Moses was by Pharaoh, and the prophets by the people of Israel in aftertimes. Jesus is the heir to that line of rejects: his rejection authenticates his mission, and in fact facilitates it. For Jesus, when he is rejected, is thrown out among all those classes of born-rejects that Lazarus embodies. Lazarus, says the Greek, is ‘dumped’ at the rich man’s gate, like some off-scouring of ill fortune; the sores on his skin may be leprous, so he is unclean; he longs to fill his belly with scraps, like the Prodigal Son – we are made to think that somehow or other, at least by the Pharisees’ standards, he must be a grave sinner to have this fate; he is lumped in among the dogs who lick his sores, like the Syrophoenician woman who also longed even for the scraps that fell from the privileged children’s table.

Leper, sinner, poor man and gentile, Lazarus is the very definition of an outcast. The Lord himself was none of these things; on the contrary, he was a son of Israel and the glory of Israel – and yet he was thrown out as if he were all these things and worse. Yet by being thrown out himself, he was able to let the likes of poor Lazarus – the likes of us – in. What had Lazarus done? ‘He longed to be filled’. In that, he is the opposite of the rich man, whose life was complete, who even had planned his death, who had a tomb waiting for him; but it is poor Lazarus, who had nothing to commend him but a yearning heart, that is carried by the hand of the Lord’s holy angel, to his altar on high. For God knows your hearts, and what is glorious among the morass of men is disgusting in his sight. It works the other way round – the one whom the great mass of men has rejected, God deigns to exalt – not just poor Lazarus on the street-corner, but first and foremost Jesus Christ, the power of God and the wisdom of God, strung up on a gibbet. Amen.

(Image of Lazarus in Abraham’s bosom and the rich man in hell, taken from an Armenian book of the Gospels, Walters Manuscript W.543, fol. 12v in the Walter’s Art Museum.)