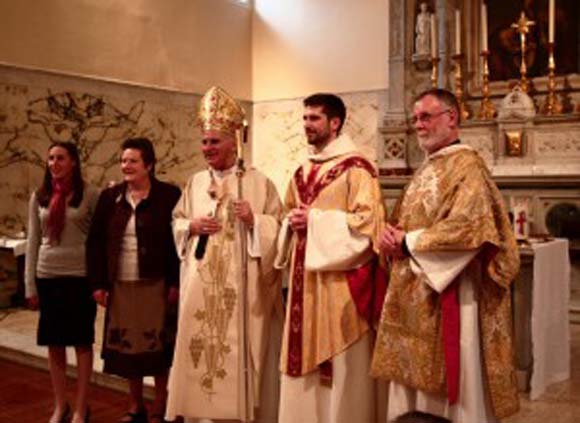 By Godzdogz Team
21
Regular Godzdogz readers may recall a previous post about four Dominican brothers of the English Province who were ordained deacons in July 2007. Three of them were recently ordained to the priesthood, while the fourth will be ordained later this month.

On 20 September 2008, fr Bruno Clifton OP was ordained in the chapel of the Mercy Sisters’ convent in Edinburgh by His Eminence Keith Patrick Cardinal O’Brien. Friends, brethren and family gathered from England, Scotland and further afield (fr Bruno’s Salesian uncle travelling from Malta, for example) to witness the occasion and to join in the celebrations afterwards at the Dominican priory in George Square.
fr Bruno, whose vocation story is online, trained as a composer, so naturally music was a prominent part of the Mass. A specially-formed choir comprising fr Bruno’s friends and colleagues, students of Edinburgh University and friars sang Byrd’s 3-part Mass, ‘Os Iusti’ by Bruckner and some Dominican chant. 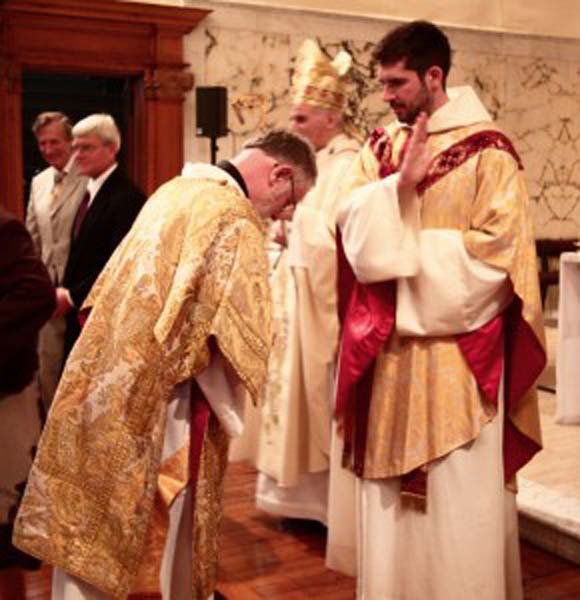 After the ordination Mass, fr Bruno gives his first blessing to those present. Above, fr Bruno’s father, who is a permanent deacon in the diocese of Arundel & Brighton receives a blessing from his newly-ordained son.

fr Bruno gives a blessing to fellow composer, James Macmillan. James is a lay Dominican and directs the choir at the Dominican-run St Columba’s parish in Glasgow.

On 27 September 2008, fr Benedict Łukasz Jonak OP and fr Alistair Jones OP were ordained in St Dominic’s Priory church in London by our brother, Bishop Malcolm McMahon OP. Once again people gathered from all over the country and from as far afield as Poland.
The music at the ordination Mass was beautiful and lent solemnity to the occasion. An excellent choir came together to sing Victoria’s motet and Mass ‘O quam gloriosum’, Tallis’ ‘Salvator mundi’ and friars sang the ‘Veni Creator’, Litany and propers from the Dominican Gradual. Below are photos from the ordination itself: 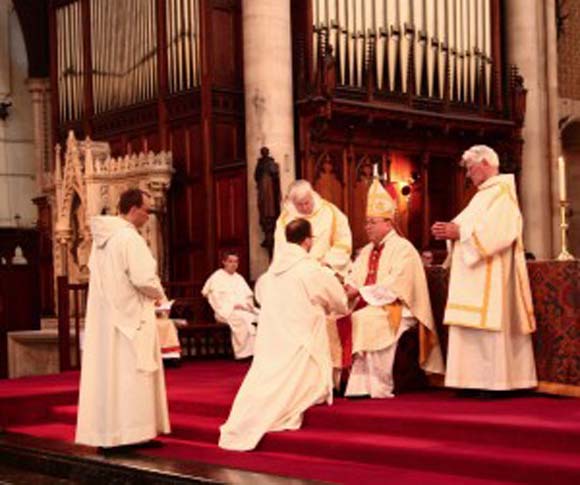 Having been judged worthy of ordination, called by the Bishop and acclaimed by the people, the ordinands are examined concerning their willingness to take on the office and duties of a priest. They then promise obedience to their Ordinary. 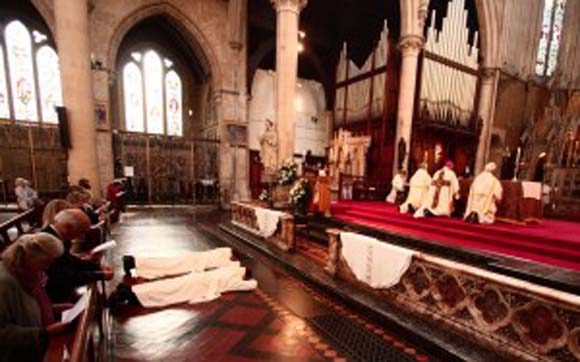 All then kneel and invoke the intercession of the saints as the ordinands prostrate themselves and ask for God’s blessing on what they are about to undertake. 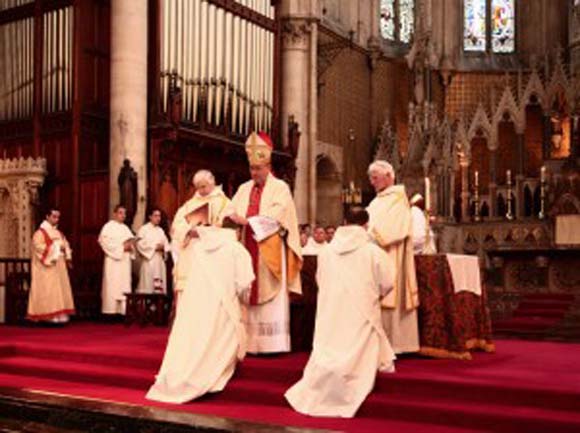 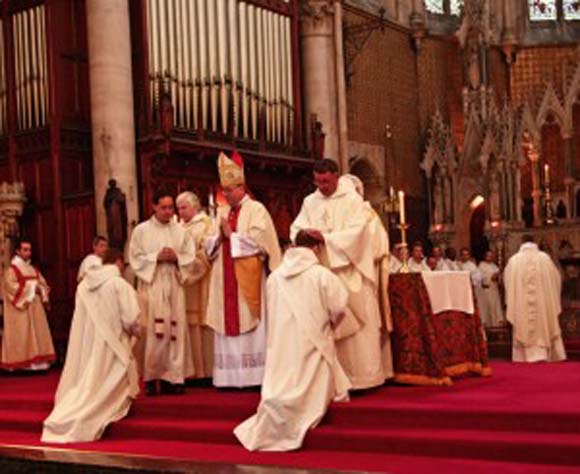 In silence, the bishop lays his hands on the ordinands, and all the priests present do likewise. The bishop then says the prayer of consecration which includes these words:

“Lord, grant also to us such fellow workers, for we are weak and our need is greater. Almighty Father, grant to these servants of yours the dignity of the priesthood. Renew within them the spirit of holiness…” 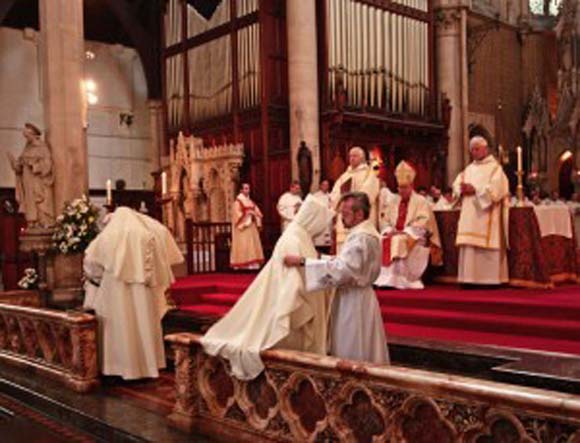 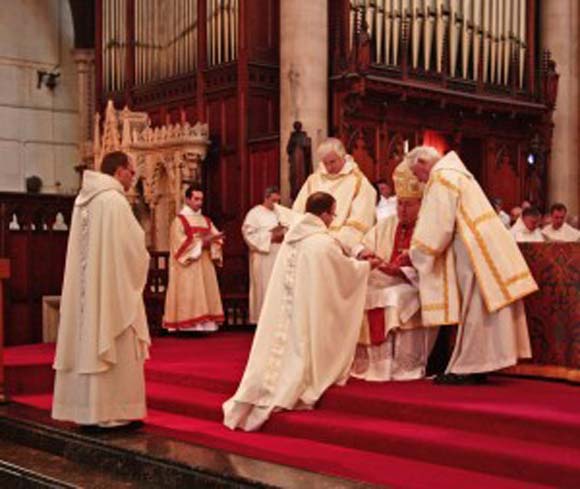 The bishop then anoints the hands of the priests, saying: “The Father anointed our Lord Jesus Christ through the power of the Holy Spirit. May Jesus preserve you to sanctify the Christian people and to offer sacrifice to God.” 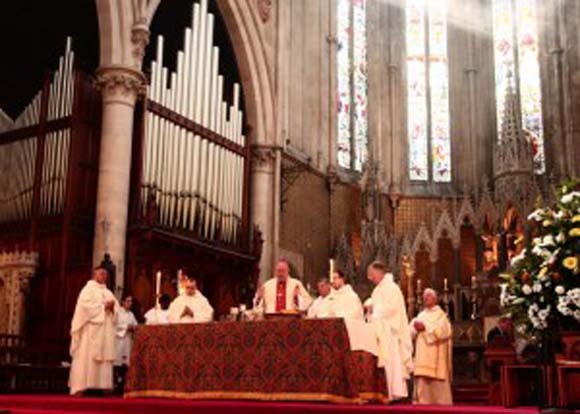 fr Benedict and fr Alistair take their place around the altar as concelebrants with the bishop and their fellow priests.
The Mass was followed by first blessings from the newly-ordained and a celebration in the parish hall which spilled out into the garden outside the priory. 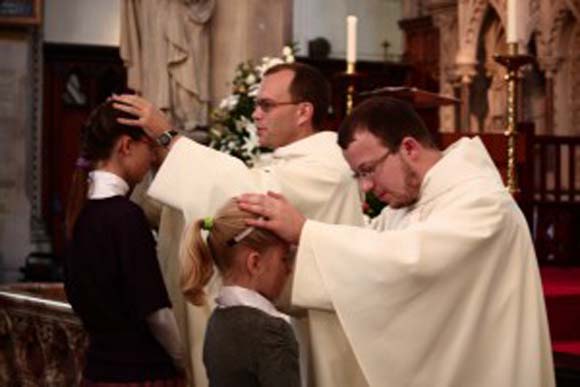 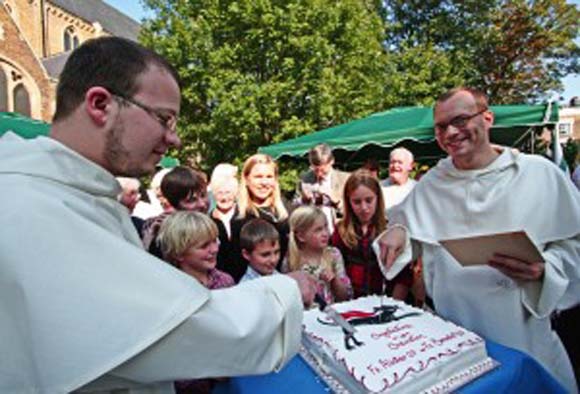 Please pray for our new priests, and for fr Dominic Ryan OP who will be ordained a priest in Cambridge on 23 October 2008.
Categories:
Ordinations and Professions, Vocations