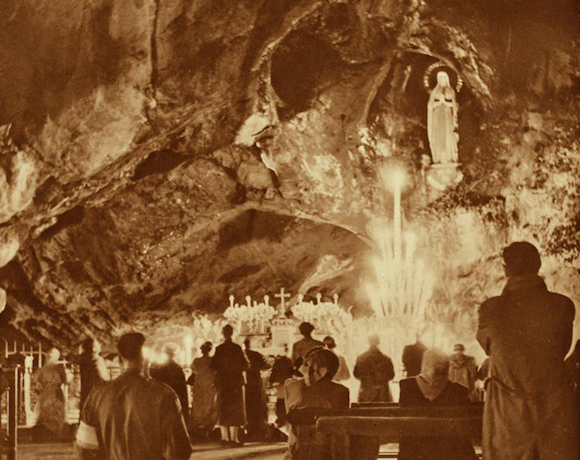 Our Lady of Lourdes

To my shame, I’ve never actually been to Lourdes. Nor have I been to any of the other apparition sites, or great shrines of Marian devotion; the notable exception being, of course, England’s own Nazareth, Walsingham, which I’ve been to many times over. But this lack of experience has always left me feeling quite at sea whenever I have to talk about Lourdes, or Fatima, or really any other place associated with Our Lady.

In my mind, Our Lady of Lourdes is associated with endless dedications of schools, parishes, hospitals, and dioceses, all marking them out as foundations of the somewhat truncated Second Spring of English Catholicism in the nineteenth century. And this perhaps explains why there is a particular kind of piety associated with Lourdes, and a kind of piety people feel uncomfortable with today. This in spite of the fact that millions of people still flock to Lourdes each year to make pilgrimage, find a cure, and do penance. My own first exposure to this kind of traditional piety was seen through the lens of the snobbery that the Anglicanism of my youth aimed at what it considered simplistic and superstitious piety. It’s an uneasiness found even with those raised as Catholics. For example Seamus Heaney, who was raised in County Derry in the 1940s and 1950s, continually returns to the themes of Northern Irish Catholicism throughout his poetry and other writing. He wrote of a Catholicism which was formed by family Rosary and praying the Litany of Loretto and describing it as mournful, politically passive, and turning his community in to a group of people who ‘stoop along’ as just another one of the venerators.

Is he right? Well, no, and he’s particularly wrong when we consider the story of today’s feast day. St Bernadette herself was a poorly educated peasant girl, and, interestingly given how much we hear of a crisis in catechesis, was herself a product of an appalling religious education system. Indeed it was her own lack of education that made her account of the apparitions all the more believable. Each evening at Vespers we sing Mary’s hymn of praise to God, which celebrates the fact that God has ‘…cast the mighty from their thrones, and raised up the lowly’ and today’s feast is a celebration of that raising of the lowly. From its beginning with the apparition of a lady in white to a poor peasant girl, up to the present day pilgrims who come to the site in search of healing and forgiveness, Lourdes testifies to the dignity of those considered lowly and poor.