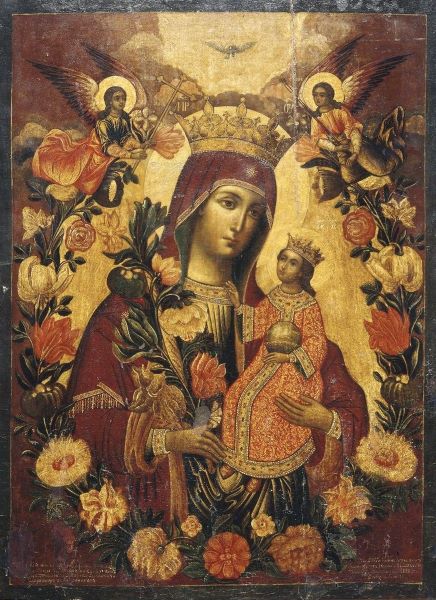 Our Lady the Unwithering Rose

By Daniel Benedict Rowlands | With each Ave, we are drawn to share in the Blessed Mother’s subversive work, that work of cooperation with the Redeemer that put enmity between Her and the Serpent, to which she gave her full assent at the Annunciation, and which can be seen coming into full bloom in her coronation as Queen of Heaven, and Queen of the Most Holy Rosary.

The 7th October marks the feast of Our Lady of the Rosary.  We had anticipated the celebration a day earlier with our customary, albeit unofficial, observance of Rosary Sunday – the feast was formerly assigned to the first Sunday in October prior to Pope St Pius X’s revision of the calendar –complete with the traditional blessing of roses after Mass. The Dominican Pope St Pius V originally instituted the feast as Our Lady of Victory in 1571 primarily in commemoration of victory over the Ottoman Turks at the Battle of Lepanto, an outcome attributed to Our Lady’s intercession obtained through recitation of the Holy Rosary.

At Lepanto, Christendom engaged with forces from the East, but Pius V’s chosen weapon, namely the Rosary, is and remains a distinctly Western form of prayer. Whilst Marian devotion and the use of prayer beads were independently present in the Eastern Church from the first centuries, it appears that they were not brought together.  The Greek tragedy Christos Paschon, originally attributed to St Gregory Nazianzen but more likely the work of an anonymous c. 11th-century author, which alludes to the honouring of the Blessed Virgin by means of an offering of a spiritual garland of prayers seems to be the closest reference to anything rosary-esque. In any case, this is hardly a compelling lead. However, if we change tack and recall that the term ‘rosary’ is derived from the Latin rosarium (a rose garden), then turning instead to the use of the symbol of the rose by the Eastern Church provides us with a more fertile point of departure, and perhaps also a way to enrich our appreciation of the blessing of roses.

That this particular botanical symbolism is invoked is perhaps unsurprising given that the rose is a plant native to the Orient and the Middle East, the Latin word rosa itself being derived from ancient Greek (ῥόδον), and that possibly from an old Persian root. Of the titles of the Blessed Virgin that mention the rose, most are associated with the Latin tradition, especially rosa mystica and rosa sine spinis, but immarcescibilis rosa (unwithering or unfading rose) – one of the titles contained in at least one version of the Dominican Litany – is of Eastern origin. The title ῥόδον τό ἀμάραντον (unfading rose) appears in the first ode of the 6th century Akathist to the Most Holy Theotokos. It is instructive to note the context: “Rejoice, O thou who alone hast blossomed forth the unfading Rose”. The key point being that, in this translation, the title of unfading rose is actually ascribed to Christ. Another translation, also consistent with the Greek, would give the Blessed Virgin herself this title as done in the aforementioned Dominican litany: “Rejoice, unfading rose”. It is perhaps this latter understanding that led to the popularisation of the Unfading Rose icon of Our Lady in the 18th century (see image). In any case, the ambiguity only serves to reiterate the intimate connection between our Lady and her divine Son: as ever, the Mother magnifies the Son.

“For the wages of sin is death, but the free gift of God is eternal life in Christ Jesus our Lord” (Romans 6:23). Whether we see an image of ‘re-Edenised’ creation, the New Earth, in the risen Christ or in a derivative fashion in the Mother of God assumed into heaven, the same victory over the corruption of death is declared. The formula invoked for the blessing of roses looks forward in hope to this same reality by asking “that the sick to whom they are brought… may be healed of their infirmities” and that devils may “flee panic-stricken”, reminding us of Christ’s Lordship over the material and spiritual realms, and the immanence of His Kingdom, the establishment of which advances invisibly but inexorably.

How can our own praying of the rosary be imbued with these ideas? One suggestion comes straight from the delightful wordplay contained in the second verse of the Ave Maris Stella, that beloved Vespers hymn for Marian feasts: Sumens illud Ave… mutans Evae nomen, ‘receiving that Ave, changing the name of Eva’. With each A-v-e we literally reverse the name of E-v-a (in English, Eve), and with the name, the sin of pride that wrought the fall of man, and the devastating consequences of concupiscence and death. With each Ave, we are drawn to share in the Blessed Mother’s subversive work, that work of cooperation with the Redeemer that put enmity between Her and the Serpent (cf. Genesis 3:15), to which she gave her full assent at the Annunciation, and which can be seen coming into full bloom in her coronation as Queen of Heaven, and Queen of the Most Holy Rosary.

Writing on the memorial of Bl John Henry Newman, a few days before his canonisation, it seems apt to close with a thought from one of his University Sermons. “Mary’s faith did not end in a mere acquiescence in Divine providences and revelations… she ‘pondered’ them…. She does not think it enough to accept, she dwells upon it; not enough to possess, she uses it; not enough to assent, she develops it”. Let us then do likewise and earnestly pray, in the words of the feast’s collect (in the Extraordinary Form), that by “meditating upon these mysteries of the Most Holy Rosary of the Blessed Virgin Mary, we may imitate what they contain and obtain what they promise”.

MORE ON: OUR LADY, SAINTS, PRAYER
View also our post series on the Rosary.
Categories:
Our Lady, Prayer