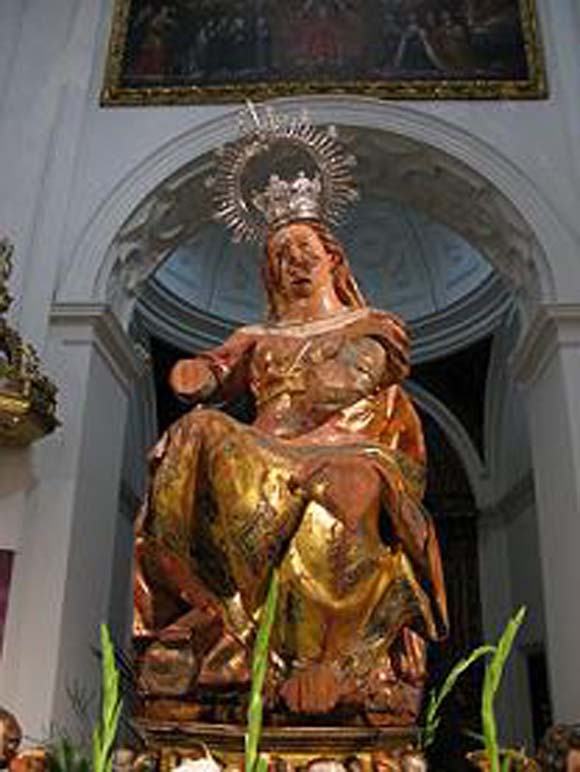 During our stay in the English College, Valladolid, one could not helped but to be aware of the College’s establishment during the fires of the English Reformation: The corridors are lined with numerous portraits of English and Welsh Martyrs who had attended the college; the chapel has secret grilled rooms where seminarians could hear Mass away from the eyes of English spies; but the most striking memorial is the statue in the chapel of Our Lady, La Vulnerata or The Wounded One.

As Spain was recovering from the defeat of the Armada and was gathering another fleet in the city of Cadiz, the Earl of Essex together with Sir Walter Raleigh led an English fleet into the harbour, defeating the Spanish fleet and taking possession of the city. Some of the English troops started a riot and dragged a statue of the Virgin Mother and Child from a church to the market square where they desecrated it. They cut off both arms, and all that remained of the child were parts of his tiny feet on his mother’s knee. The mutilated statue was taken to Madrid, and given a place of honour in a private chapel of a Countess. The priests and seminarians of the English and Welsh College in Valladolid asked the Countess if they might make reparation for the behaviour of their fellow countrymen who had desecrated the statue. She agreed and the statue was brought to Valladolid and installed with great solemnity in the College Chapel in 1600.

It was before this statue that the students of the English college made their vows before returning to their homeland and joining the English mission.
May Our Lady Vulnerata, and all our Martyr Saints intercede for us with the Lord that our students and benefactors past and present may be helped and saved by Him.
Amen.