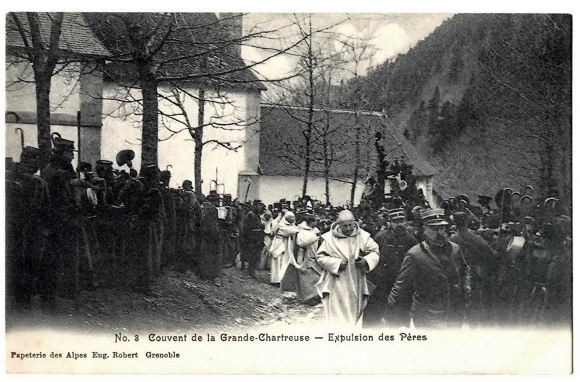 Reflections on Anti-Catholicism and the Necessity of Preaching the Gospel

By Br Thomas Thérèse Mannion O.P. | Br Thomas reflects on the rising wave of acts of persecution against Christians in the West and how we might respond as witnesses of the Gospel.

Nantes Cathedral has gone up in flames, treated as suspected arson with three fires which seem to have been independently set. The statistics from 2019 are incomplete but from January to March, in France alone, the French Bishops Conference reported 228 violent Anti-Christian attacks, mostly to Catholic churches. In February 2019, the French interior ministry detailed 1063 ‘anti-Christian acts’. These range from stealing tabernacles from churches, setting fires, desecrating the Blessed Sacrament to attacking people. In the ten years from 2008 to 2018 according to French government figures there has been a 250% increase in anti-Christian attacks on religious sites.

We should not forget during the ‘enlightenment’ under auspices of the French Revolution thousands of Catholics were guillotined and many more exiled. The enclosed Carmelite nuns of Compiègne were martyred; what threat did these women pose? These nuns who spend their entire lives in prayer behind convent walls? Do not fool yourself into thinking this could not happen again. Do not tell yourself this was long ago. In 1903 France’s secular republican government forcibly removed the Carthusian monks from the Grande Chartreuse, seizing their property and expelling them from the country. Carthusian Monks also live a hermit-like life but their very existence was a counter-witness to the swelling tide of secularism. This was 1903, not revolutionary 1789 or the reformation of 1538. These were people who thought they were clever and enlightened – people who had thrown off the ‘shackles’ of superstitious religion just like today.  Similarly today, society has found itself in a position where polarised political sides have convinced themselves through their own rhetoric that they have a superior mind – that they are enlightened – and those who are not are dangerous and must be eradicated. Look at the state of political discourse and the lost art of disagreement.

If I suggested to my Catholic friends that anti-Catholicism and attacks both emotional and physical against Christians are rising, most would have a tale to tell. Even my friends who do not practise their faith are embarrassed to tell friends they are Catholic. It is also true to say most would not want to talk about this publically for fear of being further ridiculed or shouted down by people who think it threatens to obscure other social justice issues. When I have suggested to most of my non-Christian friends that anti-Catholic attacks are increasing, most laugh.

The idea that Catholicism could be persecuted –particularly in the lands that were once Christendom– is laughable for secularists, but does this not prove the point? ‘Not necessarily’ might come the reply; after all we usually laugh at things we find ridiculous. This is true, even when the laughter conceals our own prejudices.

In 2018 I was disappointed by an art piece commissioned by BBC Scotland in which someone impersonating a priest lifts what looks like a giant mini-cheddar, clearly imitating the sacred moment at Mass when the priest elevates the Body of Christ for all to adore. I remember doing the same when I was 7 years old because I wanted to be a priest. The impersonation in the 2018 piece for the BBC was not done in love but anger, disgust and ridicule. ‘Tastes like cardboard and smells like hate’, says the voiceover. It says to the Catholic, ‘your most sacred beliefs are invalid and I have no respect for them’. I found this just as ugly as I find the homophobia it attempts to protest. Is lashing out in pain more likely to create or destroy? To build up or tear down? But, comes the reply, some things need tearing down.

When I complained about this to my friend, who had posted it, he laughed. This is a sort of invalidation that says, ‘you have nothing to be upset about’. I further told another friend about the various violent acts which have recently been committed and whilst he recognised this was sad he innocently said, ‘I do think there has to be space for criticism and even mockery – we aren’t perfect and we have to remember that any objects of devotion are always meant to point towards a truer reality… my main objects of devotion though are the poor and hurting, and they face so much more violence and vandalism.’ I saw this as another invalidation, ‘yes this is sad but not as sad as X’. I do not see these objects of devotion, the poor and the Cathedral as being in competition or separate – to quote Cardinal Dolan, ‘it’s a package deal’. It is precisely because they do point to a truer reality that this is so painful for Catholics. In these acts the poor ones of Christ are targeted, the Church closes so they have no pew to sleep on at the back of Church, those who are hungry for Christ in the Eucharist cannot draw from that well of living water; the list goes on.

St. Joseph’s Parish in New Haven, Connecticut, served by Dominicans had satanic graffiti painted on its doors on the 17th of July 2020. On the 16th, a statue of Jesus was toppled and beheaded in Miami and a statue of Mary was spray-painted red. On the 15th a statue of Mary was beheaded, on the 10th a statue of Mary in Boston was set on fire and another in Brooklyn was sprayed with the word ‘Idol’. On the 11th a man drove his car into a parish in Florida and set it on fire while people were preparing for Mass and on the same day the 249 year old San Gabriel mission in the archdiocese of L.A was burnt down.

On International Women’s Day in 2019 over a dozen churches in Spain were sprayed with pro-abortion and anti-Catholic graffiti, iglesia = muerte, ‘Church = Death’, Pecadora y orgullosa, ‘sinner and proud’. Some acts of violence against the community are overlooked because they think they are justified in protesting, seemingly by any means, the Church’s position on life for the unborn. At the same event some locks of churches were sealed with silicon to prevent the faithful from entering to worship. There was an ‘art’ exhibition where a pornographer took consecrated hosts from the Church, which Catholics believe to be the Body of Christ, and spelled out the word ‘paedophilia’ with them on the floor of a gallery. This was defended by the government. Does evil committed now justify acts of violence against a whole community? Also, in 2019 a series of videos in Venezuela showed priests and bishops being attacked by crowds in public when trying to defend their churches from being desecrated and burned. With the various scandals in the Church – from paedophilia and sex abuse to financial crimes and the judgementalism or pride from the clergy, it is easy to see why people are angry with the Church. When my grandmother was dying we called six different presbyteries trying to find a priest to anoint her and no one came; what are the odds this is the only time this happened? This is also how the morale of many good clergy has been shredded, why the authority of the Church is in tatters – this is why the personal call to holiness is so important.

If you want to read more about this phenomena across Europe you can download the Observatory on Intolerance and Discrimination against Christians in Europe’s report here.

Shall we despair? By no means! Despair is a luxury. We must do the hard work, evangelise. You were born for a time such as this, sent by Jesus Christ your Saviour!

A lack of willingness to evangelise is anti-Catholicism of a different kind, it is antithetical to the Gospel and the Church of Christ. Jesus Christ died for all people, how can we abandon them? No. In the words of my brother, Herbert McCabe, ‘… if we do not love we are dead already’.

The Spanish Anarchists are right when they say ‘The only Church that illumines is one that burns’… when the Church burns with divine charity in the heart of every Christian person. This hatred and evil will spur us on all the more fervently to evangelise, to tell the truth, to show the compassionate love of Jesus Christ who desires all souls to be saved.

The wrong thing to do would be to keep our churches closed and attempt to hoard our seed in the barn, that seed which is Christ himself. All people need Jesus, especially those who have committed these crimes. We can work to restore people’s faith in Jesus and his mystical body the Church through our devotion to the poor, marginalised and oppressed, through the corporal and spiritual works of mercy. Those works of mercy are common place in the Church but not common place enough – Pope Francis has tried to make it clear every parish should be a bustling hub for this kind of activity. The people who want to burn down our churches do not want to burn down that authentic Gospel living, but what they deem to be dominating power structures. They are posing that fundamental question given to us by those great theologians known as the Bee Gees, ‘How deep is your love?’ Let us show them that the Mystical Body of Christ is Cathedral of Mercy for the poor – those who do not know God’s love and do not feel the love of the Church, those who persecute us or want to punish us for our sins.

In some ways my friend who drew my attention to devotion to the poor was right. As Jesus says, we will have the poor with us always.

In this time of COVID-19 we have been cut off from the Eucharist, but Jesus has always been with us in the indwelling of the Trinity in our souls and through the charity we have shown for one another. Our churches have been closed but we have always been the body of Christ. Our economic structures and educational institutions are crumbling but we have realised how important our relationships are with each other, that people matter more than economic benefit. When our churches burn in the West, just as they have for centuries in the East, we can be faithful to Jesus and ‘seek first the kingdom of God’. We live in the freedom of the Glory of God knowing that the Father loves us and he will never let anything happen to us that he cannot bring good out of. The People of God are the salt of the earth and Jesus Christ the Light of the World dwells among us – he is our hope. We have a great gift the world does not have, and we will share it.

Trust in the Lord.