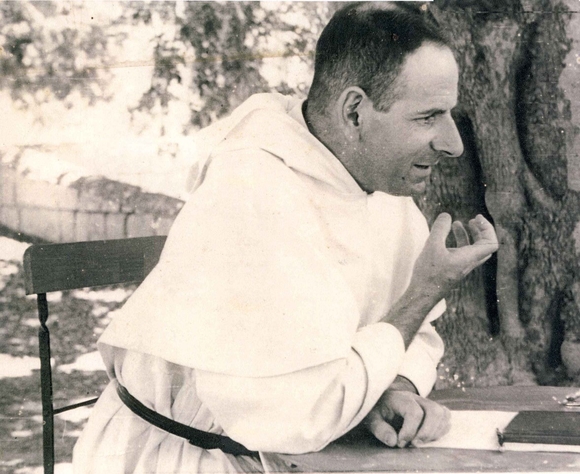 By Br Joseph Bailham, O.P. | Br Joseph shares some insights into the life of Fr Bruno Hussar, a Dominican priest, a Jew, and an Israeli citizen.

‘I am a Catholic priest, a Jew, an Israeli citizen. I was born in Egypt where I lived for eighteen years.’ These are the words Bruno Hussar, O.P., used when introducing himself at a gathering at the Israeli consulate in New York during the days of the extraordinary meeting of the United Nations General Assembly, convoked immediately after the beginning of the Six Day War in 1967. This paragraph probably already reveals what a unique character Bruno was. He is a figure of interest for me as a Dominican who has been interested, for some time, in the relationship between the Church, the Jewish people, and the Jewish state.

Bruno was a member of the Province of France, a Jew, born into a non-religious Jewish household in Egypt, later moving to France. It was in his university years that he began to draw closer to Christianity. He had read Gospels, as well as Christian authors, such as Chesterton. He says in his autobiography, When the Cloud Lifted, that one day he was reading Jesus’s words in the Gospel when the following struck him:

I was faced with this fundamental, penetrating question that would not let me rest: what if it’s not just a beautiful story, what if it’s true? Then everything would change. I wouldn’t be able to go on living and reading as before. If it were true, then it would involve and give direction to my whole life.

Bruno was baptised on 22 December aged 24. He was determined only to live for God. He was set for a period on becoming a Carthusian monk, and spent periods on retreat at the Charterhouse, receiving encouragement from the novice master there that he indeed had a Carthusian vocation.

What brought this plan to an end was a combination of the outbreak of war and family opposition. It was during the war, living under German occupation, that Bruno says he became much more deeply aware of his own Jewishness.

His vocational journey continued to meander as it often does, and culminated on 25 March 1945 in the grotto at Lourdes, where he had accompanied a Dominican whom he knew and admired. In his words: ‘I knew that I would enter the order of Friars Preachers. On 7 December I received the habit in the old convent of Saint-Jacques in Paris.’

Skipping a number of years, after his ordination as priest, which took place on 16 July 1950, his provincial, Albert-Marie Avril, O.P., opened up what would be the beginnings of a new adventure in his life. Two years earlier the United Nations had recognised the State of Israel, and a partitioned Jerusalem shared between the new state and Jordan. The provincial wanted to establish a centre for Jewish studies there. Despite there being much opposition to this plan in his province, Bruno says, ‘I realised later how prophetic and important it was, not only for the order but for the whole Church.’ 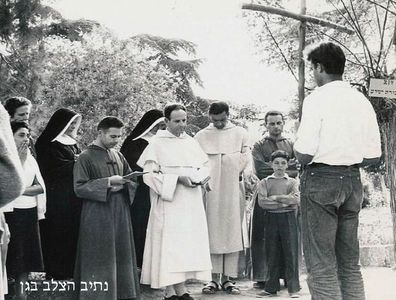 He travelled by ship to Israel from France. He said, ‘I felt deeply moved as I stepped off the ship. Undeterred by what others might think, I knelt down and kissed, if not the sacred soil, at least the quayside concrete…’ Onboard that ship his eyes were opened to the different opinions among Jews making their way to Israel as to what it meant for them. For some, the beginning of a socialist inspired democracy, for others a stage in the history of the Jewish people leading to the coming of the Messiah, and for others—drawn to the land of Israel apart from the existence of the new state—a set back to the Messiah’s coming. With all the complexity then, as today, surrounding the State of Israel, it was a place, along with its people, which were to be a life-long focus for Bruno.

His involvement in the establishing of a centre of Jewish studies hit a number of obstacles, including opposition from the Ecole Biblique, the Dominican study house in East Jerusalem, which then fell within the territory of Jordan. But eventually, after much time, the community was established with the name ‘Maison Isaïe’, Isaiah House. It was established on 25 March 1960, fifteen years after his experience at the Grotto in Lourdes.

Bruno was determined that this community be immersed in the life of the Jewish state, and so the liturgy of the house was in Hebrew. The house had an academic purpose, but under Bruno’s leadership it also served as a link between the Church on the one hand, and Judaism and the State of Israel on the other. A few of the brothers became Israeli citizens, and one brother, Marcel Dubois, lectured at the Hebrew University in Jerusalem, and was elected head of the philosophy department there. One can view a video of him debating (in Hebrew) live on Israeli television with renown Israeli philosopher Yeshayahu Leibowitz

One other initiative of Bruno’s that must be mentioned in brief is Neve Shalom/ Wahat al-Salam, also known these says as the Oasis of Peace. It was a community in the rural suburbs outside Jerusalem in which Israeli Jews and Arabs, both Muslim and Christians, live alongside each other sharing life together in a cooperative village. The aim was to be a seed of peace and communion in a region marked by division and war. Till this day various groups from across Israel come to meet in this village, one of the few occasions that young Jews and Arbs can actually meet and talk to each other in a friendly atmosphere.

Timothy Radcliffe, O.P., who visited the community and actually took a minor role in the construction of Maison Isaïe, remembers Bruno as a warm and gentle man, who was joyful and at peace. This opinion was no doubt shared by many who knew him, a man nominated a number of times for the Nobel Peace Prize.

May Bruno rest in peace, and may his memory be a blessing.

See other posts from the series