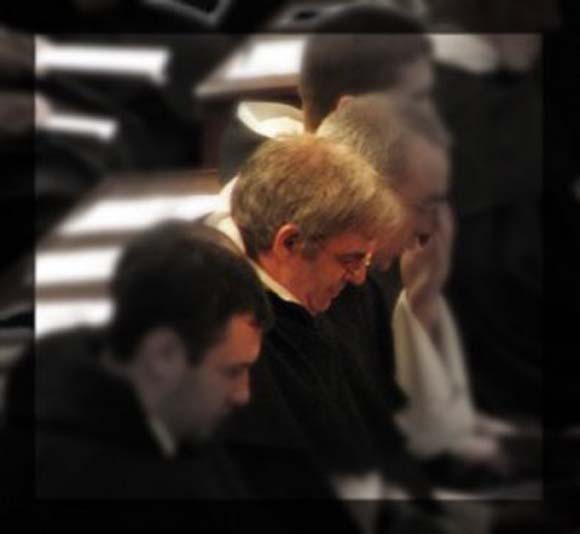 Godzdogz readers may recall an announcement on this blog about the sudden death of fr John Martin McGowan OP on 16 June 2008. fr John Martin was born on 11 May 1949 together with his twin brother, George, who was born shortly after him and who survives him. They grew up in Wishaw, north Lanarkshire, and before entering the Order, John Martin trained as a plumber.
While in Edinburgh, he moved into a room in the University chaplaincy which is still run by the Dominicans and which has limited accommodation for lay students. A student who was also in the community then was Gilbert Markus; both he and John Martin were later to join the Order of Preachers.
In 1980, fr John Martin was the first Dominican novice since the Reformation to be clothed in the habit of St Dominic in Scotland. He was professed on 14 November 1981 as a cooperator brother. Cooperator brothers are friars who are not ordained but who “take part in the community apostolate not only by providing for the needs of the convent but also by a ministry properly so-called, either working with their brother priests or exercising their own talents in the apostolate” (from the Order’s Constitutions, no. 100 § 2). Also professed at this time with him, as a clerical brother, was fr Aelred Connelly OP.
After his novitiate, fr John Martin lived his Dominican life in Leicester, Glasgow, Newcastle, and finally back in Edinburgh. John Martin exercised a ministry of great compassion and was known wherever he lived as a true friend to those most in need of help and support. He devoted his time to the fabric of the priory buildings, and in his final years travelled the breadth of the Province, ensuring the safety of their electrical equipment. This chore was always enlivened by his cheerful conversation and humour, and his annual visits to Oxford were appreciated by all the student brothers. We missed not having him come down to test our electrical appliances this year although he lives on in our memories and fond anecdotes. He was also much loved by the university students who frequented the chaplaincy in Edinburgh.
But this big-hearted brother eventually died of a heart attack, and the swiftness of his death was a shock to us all. He was aged just 59, and had been professed for 27 years. His funeral on 27 June 2008 was held in the Mercy Convent, Edinburgh, a short walk from the Dominican priory. The Requiem Mass was celebrated by the Provincial in the presence of the Archbishop of St Andrews & Edinburgh, Keith Patrick Cardinal O’Brien.