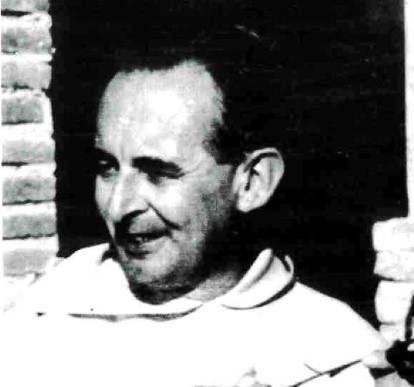 By Br Pablo Rodríguez Jordá, O.P. | Fr Victor White was a pioneer in the 20th century dialogue between psychology and religion, as well as a close friend of the psychoanalyst Carl Gustav Jung.

Though people often say that what you believe does not matter so long as you are a good person, belief and practice are for the Christian intimately related – there can be no disconnection between them. This is also why nothing illustrates the truth of Christianity better than a life well lived: not only our success, but also our confusion and sorrow can serve God’s purposes. Fr Victor White’s life was such a search for meaning in a time of upheaval.

Born in 1902 in an Anglican family, he converted to Catholicism during his school years. Although he initially became a seminarian at the English College in Valladolid, he soon felt drawn to the Dominican Friars, and was clothed in the habit of the Order in 1924 in Woodchester. In 1928 he was ordained a priest, and after further studies at Louvain he became a lector in dogmatic theology and church history at Blackfriars, Oxford.

Fr Victor’s early career as a theologian was fairly ordinary, reflective of the interests of the English Dominicans of his generation: the rediscovery of Thomism, the ecumenical rapprochement with other Christian denominations, and the Catholic involvement in the political activism of the inter-war period. Still, after a profound personal crisis he suffered in 1940, his theological work took an unexpected turn into a period of more original and mature writing.

The ominous outbreak of the war certainly contributed to his crisis: though not a pacifist, he was affected by the ineluctable radicalisation of public opinion, and the way the war had dashed the hopes of many who had been working to avoid an open conflict. More importantly, the modernist crisis in the Catholic Church during the first decades of the 20th century had given rise to an atmosphere of suspicion and control over theologians, which increasingly estranged him from his teaching duties. He eventually opened up to his friend, the philosopher Donald MacKinnon, about his problems of religious identity, and on his recommendation began sessions in late 1940 with the psychoanalyst John Layard, a disciple of Carl Gustav Jung himself. 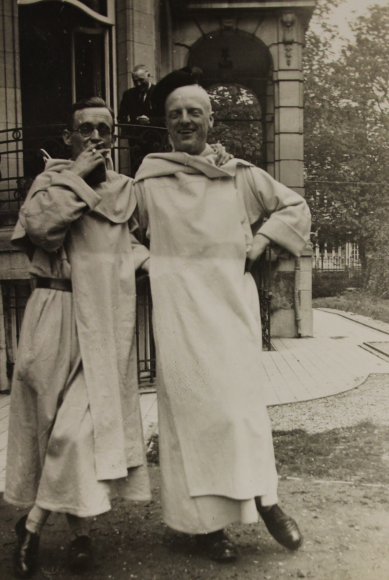 Fr Victor, on the left, as a young Dominican

What Fr Victor found attractive in Jung’s psychology was its appreciation of myth and religious symbolism, against a prevalent current in Catholic theology that often seemed to attempt to capture the mystery of God in abstractions and systematic conceptualisations with little connection to the existential side of human life. He also valued Jung’s awareness of the realities of affective and psychological growth, aspects which would receive greater attention in Catholic theology after the Second Vatican Council. In any case, Fr Victor was never uncritical of the elements of Jungian psychoanalysis that were not reconcilable with Christianity. As he wrote towards the end of his life,

I have found it widely supposed that (in spite of much that I have said to the contrary) I am somehow “for” every form of psychiatry or psychotherapy, and approve all that is done in its name (in sharp contrast to, let us say, Monsignor X., who is notoriously “against” it).

A first and fundamental obstacle was Jung’s tendency to reduce all expressions of religious faith to the purely symbolic. The Christian faith makes, on the contrary, positive historical claims: God became man, a Jew born in Bethlehem under Emperor Caesar Augustus, and was crucified and risen from the dead. Nevertheless, the sharpest disagreement in the correspondence he maintained with Jung himself over almost twenty years revolved around the nature of evil. Jung maintained a Manichean stance where both good and evil are opposed but mutually-complementary realities, existing on a par as two primeval principles. Fr Victor, on the other hand, defended the traditional Catholic view of evil as the ‘absence of good,’ which does not amount to a denial of the reality of evil, but rather the position that nothing is created evil. God is supremely good, and what we call ‘evil’ arises by severing itself from that eternal source of goodness.

Their exchanges reached an impasse in 1955, after Fr Victor wrote a harsh review of Jung’s Answer to Job, a psychoanalytical study of the book of Job. Fr Victor considered that Jung had done violence to the text by stripping it of its historical context and reading all kinds of eccentric and arbitrary psychologising interpretations into the narrative. Jung was obviously hurt by this, and, despite all the difficulties Fr Victor had weathered as a theologian to vindicate the value of Jungian psychoanalysis, the friendship between them grew cold.

Fr Victor died unexpectedly only five years later. In April 1959 he suffered a motorcycle accident, only aggravated when later in the same year the doctors detected a malignant tumour. Mother Michael, a Carmelite nun and a mutual friend, hastened to contact Jung, and through her mediation the two were finally reconciled. Around the same time, an enquiry from the Roman curia had led to the suspension of the sales of God and the Unconscious, Fr Victor’s first extensive study on theology and psychoanalysis. The report sent back to Rome in 1958 by his superior Fr Hilary Carpenter, then Provincial, is illustrative:

[As a religious] I have always found him admirable in every way and, if anything, increasingly so as the years go by. I have had more than one occasion to admire his humble obedience. (…) As to his intelligence, he is endowed above the average. He has a particular gift for teaching as well as for preaching, and he is a most assiduous student. He is regarded as something of an international expert in the field of modern psychology, but at the same time his adherence to and devotion to the sana doctrina of St Thomas has long been established and becomes more and more evident with the years. His great desire, for a considerable time past, has been to combine these two interests, trying to sift out what is good in modern psychology.

No further enquiry was made, and in February 1960, with Fr Victor’s cancer fast advancing, he saw his last book published, Soul and Psyche. He died three months later, aged 57.

Jung wrote about Job that he had lived with a “fence about him,” “perfect and upright, fearing God and eschewing evil” though never having experienced it. “Anybody,” commented Fr Victor, “can be ‘good’ in such narrow, sheltered confines as these; but he can hardly be a grown-up man let alone a hero, a prototype of the way of salvation through crucifixion and resurrection.” Instead, spiritual and psychological growth always require learning to be exposed, wounded, to see one’s plans thwarted, to know failure. Fr Victor, despite all the crises and disappointments of his life, was able to cling to God and persevere until the end.

May he rest in peace.

Other posts in the series: