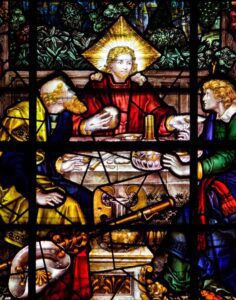 Luke 24: 13-35
St Luke deals with the post-Resurrection appearances of Christ in chapter 24 of his Gospel. The longest section  in this chapter is given over to a journey made by two of Jesus’ disciples along the Road to Emmaus. On the way, although they do not immediately realize it, the two disciples encounter the Risen Christ. Interestingly, what follows from this meeting as Luke describes it reads very much like a commentary on the Mass.
Jesus begins with a kind of liturgy of the word. We read that beginning with Moses and all the prophets, he interpreted to them in all the scriptures the things concerning himself (Luke 24:27). Using the scriptures of ancient Israel, Jesus explains the significance of his life, death, and resurrection: he teaches these two disciples that the promises God made
to Israel through the prophets have been fulfilled in him. Later in the story the two disciples will remember how their hearts burned within them as the scriptures were opened to them: faith and love are ignited by preachers of truth.
Yet strangely, despite being offered an interpretation of scripture by the author of scripture himself, the disciples still did not recognize Jesus. They have not yet grasped what resurrection means, that the risen Christ will go on dwelling in the midst of his Church. Indeed, their eyes are only opened at the breaking of bread. As evening draws near, Jesus makes as if to carry on walking, but the two disciples invite him to stay. At table Jesus blesses the bread, breaks it, and gives it to them. Only then do they recognize who this mysterious stranger is: and at this moment Jesus vanishes.
This meal on the road to Emmaus serves as a bridge between the meals that the earthly Jesus shared with his friends during his life on earth, and the Eucharist of the early Church described in Acts. Luke is pointing us to that moment when the Church understood that when we offer bread and wine in Christ’s memory, as Jesus himself commanded, then by the power of the Spirit Christ will become really present to us under the sacramental sign.
It is important to note how the two disciples responded to this encounter with Christ at the breaking of bread. We read: ‘and they rose that same hour and returned to Jerusalem’. We often refer to the Eucharist as ‘the Mass’, which derives from the dismissal in Latin: ‘ite Missa est’ or ‘Go forth, the Mass is ended’. We gather around the altar with Christ to be nourished, to be fed. Then we are sent out to draw others to this banquet.