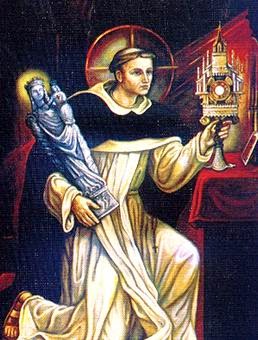 By Godzdogz Team
1.19k
About the same time that Dominican brothers came to England founding their first priory in Oxford they also came to Poland. The first priory was established in Cracow by St. Hyacinth, who was the first Polish Dominican and whose feast day is celebrated on 17 August. Hyacinth was born about 1183 in Kamień Śląski near Opole (southern part of Poland) in a noble family. He studied in Paris and Bologna and after his return to Poland he became a priest and a canon of the cathedral of Wawel in Cracow. In 1220 he accompanied Iwo Odrowąż, who was bishop of Cracow, to Rome where they met St. Dominic. There in 1221 he received the religious habit from St. Dominic himself. After a short stay at Santa Sabina he came back to Poland. On his way Hyacinth established a Dominican priory in Friesach in Carinthia. In 1223 he settled at the Holy Trinity church in Cracow where he founded the first Dominican priory in Poland that since that time has been existing without interruption.
St. Hyacinth was a tireless apostle and a great missionary. He established Dominican priories in many Polish dioceses as well as he went to Prussia, Ruthenia and Lithuania spreading the faith. Because of his zeal and evangelizing work a lot of people were converted and  many churches and priories were built. He came back to Cracow in 1243 and he died there on 15 August 1257. He was beatified by Pope Clement VII in 1527 and he was canonized by Pope Clement VIII in 1594. His tomb is in the Dominican church in Cracow.
There are many legends associated with St. Hyacinth. One of them explains why he is very often depicted with a monstrance containing the Blessed Sacrament and with a stone statue of Our Lady. This legend says that during a Tatars attack on Kiev Hyacinth wanted to prevent a sacrilegious attack, so he went to the chapel to take and save the Blessed Sacrament from the tabernacle. But at the same time he heard the voice of Mary asking him why he takes her Son, but he leaves her. Hyacinth was worried, because the statue was very heavy, it was made of alabaster, but Mary promised him to make it very light and so it was, so Hyacinth could carry it. For this reason he is usually shown holding a monstrance and a statue of Our Lady.
There is also an interesting fact that St. Hyacinth is the only Polish saint whose statue can be found among statues of other saints on Bernini’s colonnade surrounding St. Peter’s Square in Rome.
Ave, florum flos, Hyacinthe,
omni flore purior.
Ave, gemma pretiosa,
cunctis gemmis clarior.
Ave, protector omnium
ad te confugientium.
Ave, caelestis incola:
succurre prece sedula.
O Hyacinthe sanctissime,
o Confessor dulcissime.
Categories:
Dominicans, Saints