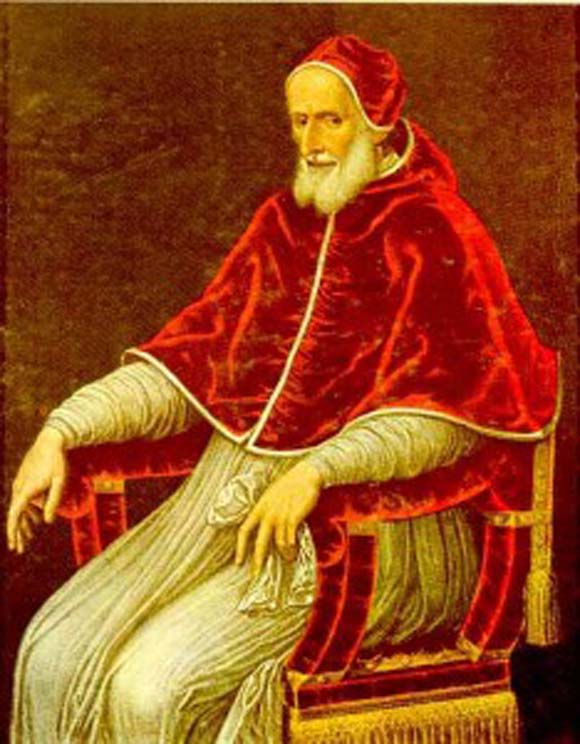 Pius V was Pope during one of the most turbulent and unstable times in the history of Christendom. Europe had been torn apart by the reformation and by the time of Pius’s election in 1556, Protestantism was strongly established in many regions of Europe. Pius V was the right man to lead and accelerate the Catholic reformation.

He joined the Order of Preachers in 1518, a year after Martin Luther had published the 95 Theses. His Dominican life, from the beginning, was very much concerned with defending the Church against the heresies of the time. After teaching in Pavia, where he had published many apologetic works, he was sent on an inquisitorial mission in Como.

His virtuous defence of the Church was also complemented by a zeal for reform within the Church. Many of the criticisms of the Church stemmed from the moral laxity of certain clerics, especially the Popes. As a Prior, Pius insisted on discipline and simplicity within his houses. His example and reforming nature led to his elevation to the episcopate. He was held in such high regard that he was made a Cardinal and given the honour of the Supreme Inquisitorship.

He was elected Pope in 1566 at the age of 62. He immediately began to create an atmosphere of discipline in the Church of Rome. He reduced the cost and excesses of the Papal court and compelled residence amongst the clergy. Within the city of Rome he expelled prostitutes and regulated the inns. His most important work however was the enforcement of the canons and decrees of the Council of Trent. In 1570 he promulgated a new edition of the Roman Missal. He also excommunicated Elizabeth I of England in an attempt to win England back to the Church.

He was pivotal in forming a Holy League to defend Europe from the Turks, culminating in the victorious Battle of Lepanto. Pius was made aware of the triumph in a vision, attributed the victory to Our Lady’s intercession and instituted the feast of Our Lady of Victory, now celebrated as Our Lady of the Rosary.

Pius V was the right Pope for the right time. His leadership consolidated and strengthened the Church in the most turbulent of times. He united the Catholic Princes of Europe when they were under threat from foes both spiritual and military. His reforms and reinforcement of discipline were a shot-in the-arm for the Catholic reformation and provided a base for renewal and resurgence in the Church.