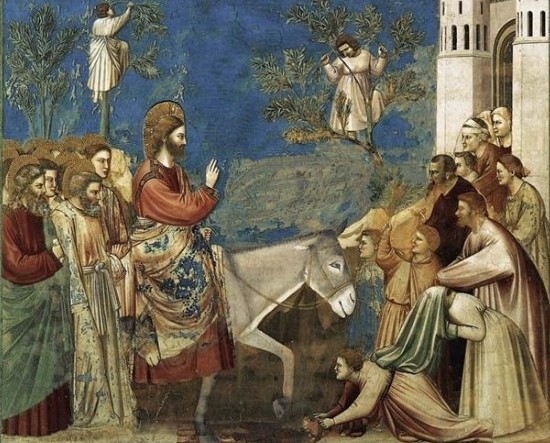 Sanctify the Sunday | There are now abundant resources available online to mark the Sunday via live-streamed Masses. However, if you prefer to pray at your own pace, the student brothers would like to offer you some guidance on how to meditate on this Sunday’s Mass propers and readings.

Remember the sabbath day, to keep it holy. Six days you shall labour, and do all your work; but the seventh day is a sabbath to the Lord your God; in it you shall not do any work. (Ex 20:8-10)

The second commandment exhorts us to keep the sabbath holy. On this day of rest, we remember God’s covenant with us and render Him due worship and praise. Although the ordinary way of doing this is by attending Sunday Mass, present circumstances have led to the suspension of public services in order to protect the most vulnerable. Nevertheless, the divine commandment to keep the sabbath holy remains.

There are now abundant resources available online to follow lived streamed Masses. However if you prefer to pray at your own pace, we would like to offer you the following guidance to meditate on today’s Mass propers and readings.

Find a quiet space where you can leave distractions behind and pray without interruptions. Some people find it easier to prepare by lighting a candle, contemplating sacred art (a crucifix, an icon or other sacred images) or playing some sacred music in the background (see ‘Other Resources’ at the end for suggestions).

We begin by placing ourselves in the presence of the Trinity.

We acknowledge that are in need of God’s mercy and ask for His forgiveness.

Have mercy on us, O Lord: For we have sinned against you.

Show us, O Lord, your mercy: And grant us your salvation.

May almighty God have mercy on us, forgive us our sins, and bring us to everlasting life. Amen.

We gather up our prayers with the spirit of the Lenten season and the holy desires of our Mother the Church. After a moment of silence, we pray:

Almighty ever-living God, who as an example of humility for the human race to follow caused our Saviour to take flesh and submit to the Cross, graciously grant that we may heed his lesson of patient suffering and so merit a share in his Resurrection. Who lives and reigns with you in the unity of the Holy Spirit, one God, for ever and ever.

We recommend you read slowly, perhaps going over the texts a few times, and allowing yourself to pause on anything that draws your attention. Remember that meditative reading is another way of listening to the Word of God.

What do these texts say to me? How do they relate to my personal situation? If you are accompanied by others, you may want to share the words that have had the most impact on you.

You can also read this reflection from Torch by one of our friars or watch the following homily preached today at Blackfriars, Oxford:

We call to mind our more specific prayer intentions and those of the whole church, as we remember our loved ones, and especially those suffering in this time. All our are needs are asked for in the prayer our Lord and Saviour gave us:

Our Father, who art in heaven, hallowed be thy name; thy kingdom come, thy will be done on earth as it is in heaven. Give us this day our daily bread, and forgive us our trespasses, as we forgive those who trespass against us; and lead us not into temptation, but deliver us from evil. Amen.

St Thomas Aquinas defined Spiritual Communion as “an ardent desire to receive Jesus in the Most Holy Sacrament and lovingly embracing Him as if we had actually received Him.” The Church teaches that if you are in a state of grace and make a Spiritual Communion, you will receive all the fruits of the Sacrament.

My Jesus, I believe that you are present in the Most Holy Sacrament. I love you above all things, and I desire to receive you into my soul. Since I cannot at this moment receive you sacramentally, come at least spiritually into my heart. I embrace you as if you were already there and unite myself wholly to you. Never permit me to be separated from you. Amen.

We prepare to close our time of prayer, in gratitude for the graces we have received.

We humbly beseech you, O Lord, that, just as through the death of your Son you have brought us to hope for what we believe, so by his Resurrection you may lead us to where you call. Through Christ, our Lord, Amen.

May the Lord bless us, and keep us from all evil, and bring us to everlasting life. Amen.

Sacred
Art (on the Entrance of Jesus into Jerusalem)

Send us your suggestions

We would like to have your feedback. Let us know if you have any suggestions, comments or requests. You can do that here.

Image: The Entry into Jerusalem, by Giotto (1267-1337) via Wikiart. Excerpts from the English translation of The Roman Missal © 2010, International Commission on English in the Liturgy Corporation. All rights reserved.