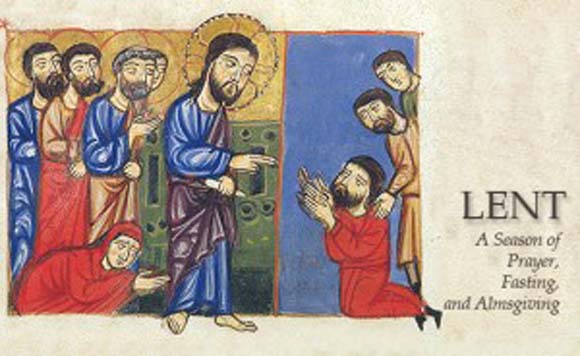 By Toby Lees O.P.
91
Readings: Isaiah 58:9-14; Psalm 85:1-6; Luke 5:27-32
If I had to bet on what one question most Catholics have been asked recently, I would go for “What are you giving up for Lent?” However, I expect most of us have been reminded in at least one recent homily that proper Lenten observance has two other crucial components: prayer and almsgiving. It is on the last of these that I wish to reflect in the context of today’s first reading from Isaiah, in which we hear the following words:

If you give your bread to the hungry, and relief to the oppressed,
your light will rise in the darkness, and your shadows become like noon.
The Lord will always guide you, giving you relief in desert places.
My reaction to these words and those like it is often one of confusion. How should I put this into practice? Giving ‘bread’ can seem so token in the face of the problems facing the people on the street I walk past each day; problems of addiction, housing, and benefits, can seem insoluble for me alone to solve and, in some cases, it seems too complicated to provide relief to the oppressed. I start to hearken for a simpler time (I have no idea if it really existed!) when you could just give money or food and somebody’s problems would at least be alleviated for a while; a time where you would not have to worry about what the money you give might be used for.

However, as I reflect on this, I realise that this can often result in me doing nothing. This inertia can be harmful to me personally and also damaging to society. I think there are two attitudes one can take in response. First one can resolve to do the good things one can, no matter how small, even when they seem insignificant in terms of the problems faced. For, the prophet does not tell us that we have to solve permanently other people’s problems. However, what is certain is that no good results for us or the afflicted, if we do nothing. Or, secondly, we could decide to dedicate ourselves to making a profound difference; we could look around us and say that something has to change, and whilst I won’t be able to do it by myself, I can be part of the solution or even the start of it. On this front I have been very much inspired by one of my US brethren in the Province of St Joseph, Fr Greg Maturi, OP. Faced with the tragedy of the separate murders of two of his parishioners, he decided something had to change . . .
In a separate interview, he also reminds us that our inaction can have worse consequences than simple inertia. It can lead to despair, a state which is contrary to the Gospel message. As Fr Greg says, in response to the claim that whilst worthy, his actions won’t change anything: “My biggest problem is not fear of being attacked by gangs or whatever. My biggest problem is keeping people from falling into despair and becoming cynical . . . . that is a tougher fight than a physical fight.” We should remember that the moment we see evil in the world, and resign ourselves to it with despair, is a victory for the enemy. Even during Lent, we must not lose sight of the victory over evil, which has been won for us all for all eternity, by the death and resurrection of Jesus Christ; the struggle is never ours alone.