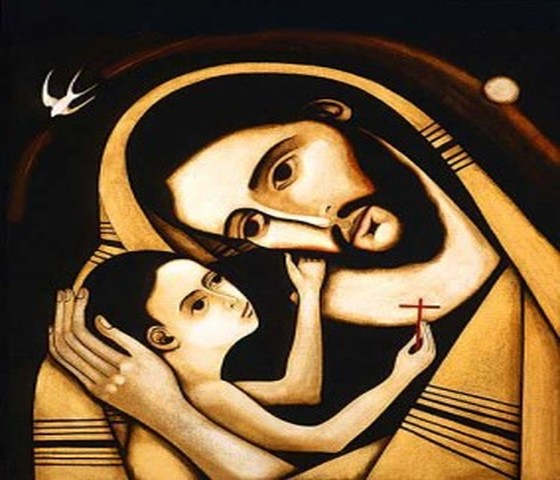 Solemnity of St Joseph, Spouse of the Blessed Virgin Mary

Today’s solemnity might be thought of as the original feminist feast day: for today we celebrate the Solemnity of St Joseph, but we do so by reference to his being ‘the Spouse of the Blessed Virgin Mary’. In fact, St Joseph’s whole life is defined by his relation to others. He is the earthly father of Jesus, and the husband of Mary, and we celebrate him today for his fidelity and courage in fulfilling his obligations to each of them. He is a great counter-witness to modern obsessions with autonomy. He did not realise himself in being free from obligations to others, but in lovingly fulfilling them.

We do not have a single word of St Joseph’s recorded in the Scriptures; he is the archetypal strong silent type and a great example to us in an increasingly noisy world. Where some broadcast their virtue from the rooftops – or via facebook – St Joseph is more of a Nike man: he just does it. For this reason he has been described as an icon of our faith: ‘. . . words would be a distraction. His love of Our Lady, care for Jesus, obedience, faith, purity, simplicity, courage and hope speak loudly from the home he built in Nazareth . . . [and] we best know St Joseph through Jesus’s words and deeds.’ This is what icons do; they ‘speak to us of the presence of God among us in the material world.’

St Joseph is the quiet man of action and his actions are oriented to, and obedient to, the will of God. Whatever vision he may have had of his life was radically altered that night when the angel appeared to him in a dream and said: ‘Joseph son of David, do not be afraid to take Mary home as your wife, because she has conceived what is in her by the Holy Spirit. She will give birth to a son and you must name him Jesus, because he is the one who is to save his people from their sins.’ After this vision we are told simply that: ‘When Joseph woke up he did what the angel of the Lord had told him to do’ (Matt 1:20-22, 24). Having contemplated a life without Mary, he now sees that being Mary’s husband and raising a child, not biologically his own, will be his future. It’s for this setting aside of his own inclinations for something greater that we quite rightly celebrate his example today.

Jesus will come to be recognised as the Son of God, and the Second Person of the Trinity; Mary will be known as the Mother of God and the Mother of the Church; and Joseph will be remembered in relation to them. Joseph’s greatness is to be found in his willingness to let Mary and Jesus be who they should be. Like John the Baptist, he decreases so that they may increase.

In that perennial Christian paradox, Joseph finds himself the moment he starts to lose himself in God’s will. One day the child he raises will tell us that our prayer to the Father should always be, ‘Thy will be done’: for true human flourishing consists in the convergence of God’s will and ours. As Joseph heeds the words of the angel he becomes the living example of St Paul’s exhortation to husbands: ‘Husbands, love your wives, as Christ loved the church and gave himself up for her’ (Ephesians 5:25):

At the dawn of Christianity, married life and love are given new ‘breadth and length and height and depth’ (Ephesians 3:18). Joseph and Mary, as husband and wife, become an icon of Christian marriage, which ‘in its turn’ will be ‘an efficacious sign, the sacrament of Christ and the Church’ (CCC, 1617). They are the incarnate expression of human communion, which expresses the very life of God. They are wedded not simply to provide a fitting home for the child; they are wedded so that men and women can know what it means to be wedded to God.

On today’s Solemnity we don’t remember Joseph for his wise words or for his dramatic actions, we remember him for simply doing the Father’s will, for giving himself up for others. This is the calling for many of us in our Christian lives, and our example may not be widely celebrated by the Church, but it just might affect those around us.

If we live as we ought to, like St Joseph, we may become icons of the living Lord, and that would be a life well lived.