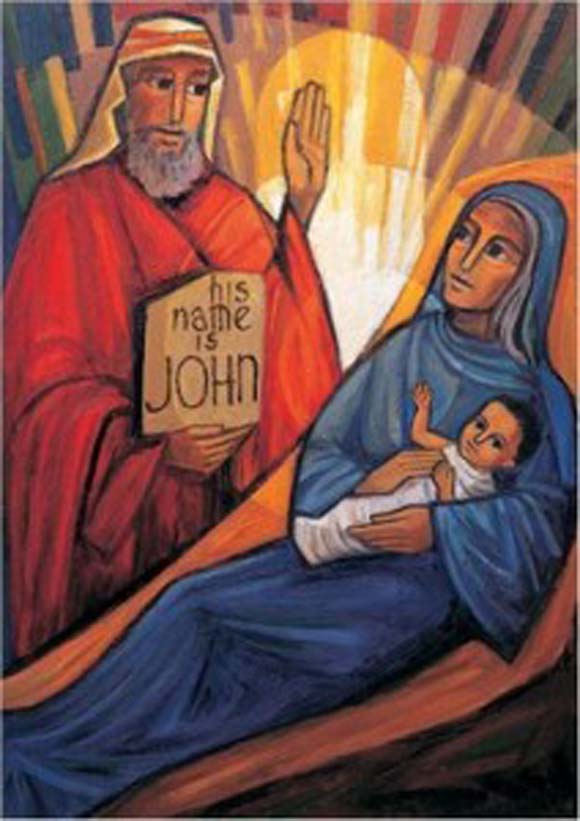 Solemnity of the Nativity of Saint John the Baptist

Every morning of our Dominican lives, we along with all other religious and those who observe the Divine Office, sing of Saint John the Baptist when we pray the following lines from the Benedictus:
As for you, little child
you shall be called a prophet of God,
the Most High.
You shall go ahead of the Lord
to prepare his ways before Him,
To make know to His people their salvation
through forgiveness of all their sins,
the loving-kindness of the heart of our God
who visits us like the dawn on high…
(Luke1:76-78).
It is both striking and fitting that each day as we sing of the mission of John the Baptist that he should remain nameless. It is striking because he was the last and the greatest of the prophets, and the forerunner of the Saviour. It is striking because his father, Zechariah, was a Temple priest and the message of John’s birth is given to him in the liturgy – a more auspicious lineage and annunciation than that of Christ and futhermore his name was decreed by God to Zechariah before his birth. Zechariah, though struck mute on John’s annunciation for his lack of faith, was rewarded for his fidelity to God’s will at John’s circumcision, insisting that he be named John  – and yet each morning we name him not.
Why, then, is it fitting that we do not name John when we sing of his mission each morning of our lives? It is fitting because it is characteristic of the way John lived his life. John’s greatness consisted in his always pointing to the one who was greater than him. John went into the wilderness and the crowds flocked from far and wide to be baptised by him, and yet still he pointed to the one who was to follow him, the one whose sandals he felt unworthy to bear. John’s whole disposition and mission is summed up in his words: “He must increase, but I must decrease” (John 3:30).
John like all the great saints points beyond himself to Jesus Christ. As such he is a model for Christian living. At this time of year Dominican students would do well to remember his example; for another daily feature of Dominican life for the students in formation at this time in every term is exams! John reminds us of the reason we study diligently throughout the term: not for our personal glory in gaining a summa cum laude, or some other honour, but for the sake of being effective preachers of the Gospel. We study not for our own personal satisfaction, but so that we might pass on the fruits of our study to others; neatly summed up in the Dominican motto: Contemplare et contemplata aliis tradere.