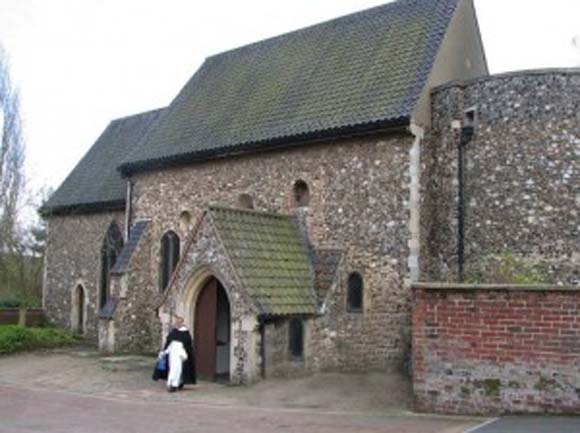 Very little is known about Mother Julian of Norwich (d.1442). Not even her name is left to us, and she is called after the church of St Julian in Norwich, where she lived as an ‘anchoress’ walled up in a small room attached to the church. She belongs to a great flowering of medieval English mysticism but unlike the Rhineland mystics, Julian and the other English mystics did not live in a religious community, and Julian lived a hermit’s life (albeit with a cat).

From her little cell in Norwich, she journeyed into the heart of God, and over many years she received visions – “by bodily sight, and by word formed in my understanding, and by spiritual sight” – of God’s passionate love for all humankind. And these ‘Showings’ were intended for a greater audience, and thus she wrote them down and preached from her anchorite’s cell, and to many people, what she had contemplated of God’s grace and love. The collection of her writings, ‘The Sixteen Revelations of Divine Love’ (c.1393), is thought to be the first book written by a woman in English, and has been likened to a traveller’s first-hand description of what she had seen and experienced.

As with most Christian mystics down the ages, what they learn through contemplation is meant to be preached and given to others, so that all may benefit from their gift of spiritual insight. For such is the direction of Love: that it flows outwards and seeks the good of the other. So, Julian says at the end of her work: “Would you know Your Lord’s meaning in this thing? Know it well. Love was His meaning. Who showed it to you? Love. Why did He show it to you? For Love.”

Mother Julian is rightly popular today for her ‘optimism’, notably her teaching that we are loved into existence and held in being by God’s love, and that at the end of all things, “all will be well” for “all that is done is well done, since our Lord God does all”. This expression of God’s wise providential care is coupled with her famous image of God’s love. She saw that all creation is being held in God’s hand, as small and insignificant as a hazelnut, and all this God held in being because of his eternal and unchanging love. Of course, her doctrine of being and providence is not by any means new; her revelations are an assimilation of the Scriptures and the wisdom of the Fathers and Catholic theologians. For example, St Thomas Aquinas certainly taught that God, who is Love, is the reason that creation exists – that there is something rather than nothing – and the continuation of created being is evidence of God’s undying love which is holding all things, including us, in being. Julian, however, sees these metaphysical doctrines with child-like clarity and we can be grateful to her for popularising this Catholic doctrine of creation. Indeed, it is all too easy to forget that all of creation is good, and its very existence is a sign of God’s on-going love and care; Julian reminds us of this. Similarly, she reminds us of the promise given in the Biblical book of Revelation that Christ has conquered all evil, so that at the end of time, all things will be made new in Christ and so indeed, all will be made good again. Thus, Julian emphasises the eternal embrace of divine love, in which we have been “loved and known in his endless purpose from without-beginning”. Wrapped up in the clothing of God’s love that “embraces us… so that he can never leave us”, so Julian also emphasises the confidence that we ought to have in God’s goodness, for in his providence and love “he has made all things profitable to us”. 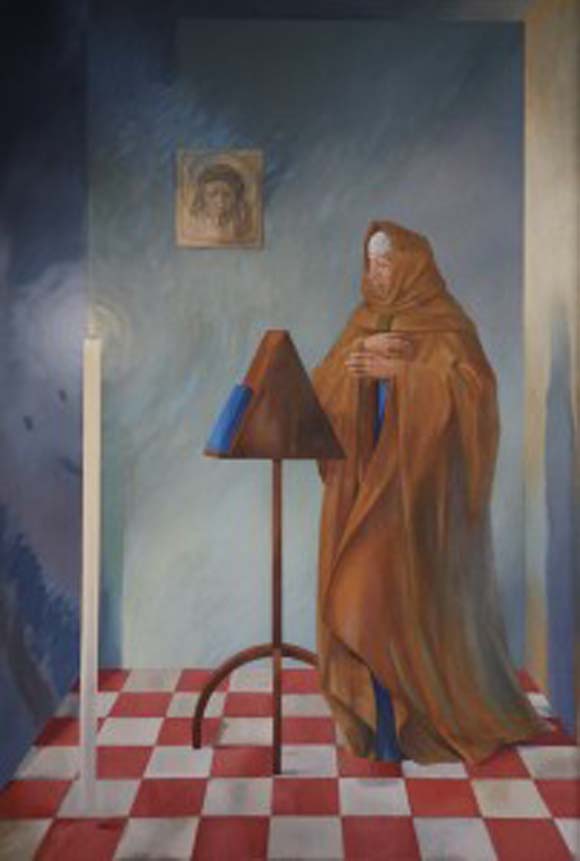 Nevertheless, Julian is also aware of sin and the need for conversion through love and humility. Like the best Catholic theologians, she says: “I saw truly that sin is no-deed” for there is no goodness in sin, and only the good has being, for it is held in being by God’s love. Sin, then, is a falling short of good and sinfulness describes the lack of good in a deed; its no-deed, so to speak. Julian says that “because of our changeability we fall often into sin”. Only God is constant and true; we, however, are “affected by the promptings of our enemy, and by our own folly and blindness”. Hence Julian does not fear sin. Indeed she considers it to be an inevitable part of the human condition. However, what she does fear is the sort of dread that paralyses us from approaching God after we have sinned. How many still avoid receiving God’s forgiveness in the sacrament of confession because of fear, or how many deny they have sinned because they fear admitting failure and imperfection?

For Julian, then, what is to be feared is the lack of contrition, and indeed, the fear that may arise from sin and lead to despair. St John tells us that perfect love casts out fear, and so Julian emphasises that we have to be founded in God’s love and confident of his mercy so that when we sin, we should not run away “with this false dread of our wretchedness and the pain that [the Devil] threatens us with” but we should rather be “aware of our wretchedness, and flee to our Lord” and then, “meekly and patiently bear the penance that God gives us”, suffering alongside our beloved Lord Jesus who endured the Passion for our salvation. So, she says, “the remedy is that our Lord is with us, keeping us, and leading us to fullness of joy”. Again, she says, “He is the ground of all our life in love; and furthermore… he is our everlasting Keeper, and mightily defends us against those enemies of ours who fiercely attack us”, and our need of Christ is greater, the more we fall into sin. The admission of our sinfulness and our need for a Saviour requires humility on our part, and it would actually be spiritual pride to deny this and avoid the embrace of the Divine Physician. 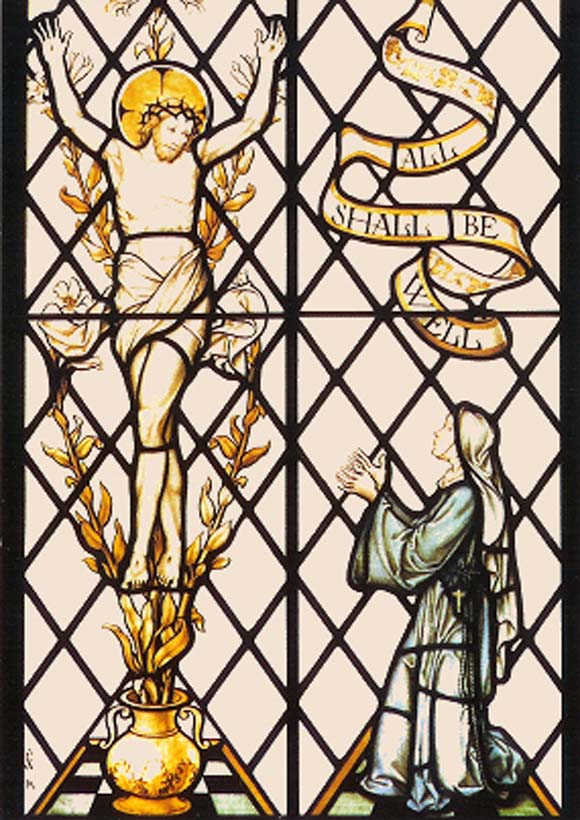 So much more can be gleaned from her writings, but we can see three elements played out in what has been mentioned thus far. At the beginning of the Revelations, Julian says that she asked for three wounds in her life: “the wound of true contrition, the wound of kind compassion, and the wound of earnest longing for God”. The first wound is essentially about ourselves: it is the wound that we all bear as sinful creatures, and once we are at peace with our sinful condition, we can accept our need for Jesus Christ, our Saviour and “flee to him”. The second wound concerns our relationship with other people, whom we should treat with kindness, and this is evident in Julian’s writing, her gentleness, and the fact that she was a well-known spiritual counsellor in her time. The third wound concerns our relationship with God, and it is this that she says “dwelt [in her heart] continually”. This desire for God, which is written into every human heart, and grows in love, the more we know and experience God’s love, providence and mercy, is that which directs us to our final end in God and leads us home to him. And it is this divine love for God and from God that oversees the other two ‘wounds’. Hence she says: “As his love for us is never broken for our sins, even so it is his will that our love should not be broken either for ourselves or for others. But he wills that we should hate the sin in itself, and endlessly love the soul of the sinner, as God loves it; then we would hate sin as God hates it.” So, the soul which longs for God, longs for goodness and being, and so shuns sin which is no-deed, absence of good and of being.

With these wounds imprinted on the heart, Julian has given us the core of the Christian faith; the Christian’s confidence in God and hope in salvation through a loving God who is the cause of our good and being. Thus, fr Jordan Aumann OP has said that Julian is of “considerable importance in the history of spirituality and precisely because she gives testimony to the workings and manifestation of grace in the mystical life.” That mystical life is not restricted to the few but is promised to all of us who, like her, would have Jesus Christ as Friend.

An online text of The Revelations of Divine Love can be found here.