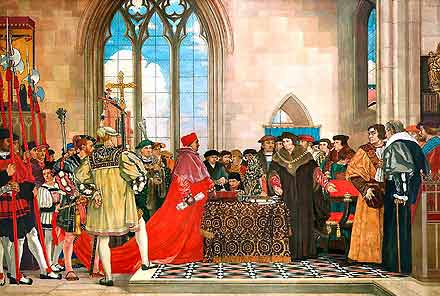 St. Thomas More and the Dominicans

Today we commemorate the Feast of St. John Fisher and St. Thomas More, two heroic men who made the ultimate sacrifice for the faith in the tumultuous court of Henry VIII. I’ve been asked to write something about St. Thomas More. With some regret, therefore, I shall leave St. John Fisher for another day but before doing so, might I recommend Cardinal Vincent Nichols’ excellent book.

Thomas More: Saint, martyr, Lord Chancellor, Speaker of the House of Commons, Member of Parliament, Barrister, Scholar, author of Utopia, Husband, Father, Layman. These are just some of the predicates that people ascribe to the man. John Whittington, a contemporary of More, said, in words later immortalised in the eponymous play and subsequent film, that he was “A Man for All Seasons”. He has always been something of a personal hero of mine, perhaps due to my professional background in politics and law. But what about my present station, as a Dominican Friar? Can I find any links with the Saint and what I am doing now?

So much has been written about St. Thomas More. Rather than rehash some of the fine scholarship or present an apologia against the perverse characterisation by Hilary Mantel, amongst others, I thought it might be fun to briefly explore a few links that he had with the Dominicans and thus take a lighter look at a life that ultimately, of course, ended in tragic glory.

Undeniably, More would have come across Dominicans throughout his life. The Order of Preachers were well established in both London, where More was born and lived for almost all his adult life, and Oxford where More studied, probably at what is now Christ Church. As a young man, we know that he explored his vocation with the Carthusians, spending four years in the London Charterhouse. It is also claimed he considered joining the Franciscans. Whilst he had the generosity of spirit to enter religious life, God had other plans it seems. Erasmus, his friend and confidant, wrote that More couldn’t shake off his desire for a wife and decided it would be better to be a good husband than a bad priest. It is tempting to wonder about More’s suitability a Dominican but alas there is no evidence this is something he seriously considered.

There is evidence, however, for the esteem in which he held St. Thomas Aquinas. I think it is important to stress this point as More is often wrongly characterised as an early Christian humanist who stood in opposition to scholasticism. Sed contra, More called Aquinas “the very flower of theology”, and said of him “a man of that true perfect faith and Christian living thereto, that God hath himself testified his holiness by many a great miracle and made him honoured here in his Church in earth, as he hath exalted him him to great glory in heaven”. There is also a wonderful anecdote relayed by one of his earlier biographers: More was travelling by boat to London and after reading a heretical treatise he remarked to his secretary, “the arguments which this villain has set forth are the objections which St. Thomas puts to himself… in the secunda secundae, but the rogue keeps back the good Doctor’s solutions!”

A second link is the second Dominican Priory in London, “Blackfriars” where now stands, inter alia, the like-named tube station and pub. At Blackfriars, More served as Speaker of the House of Commons since Parliament met there several times during the earlier reign of Henry VIII. Henry was later to establish the Palace of Westminster as the permanent home of Parliament. Appropriately enough, it was in the chambers of the Dominican Priory that More made his famous ‘Petition for Free Speech’ on 18th April 1523. In this address to Parliament, he insisted upon the right of members to speak freely without fear of imprisonment, the first recorded defence of free speech and a ‘parliamentary privilege’ that remains to this day.

Thirdly, fr. Lodiocius Pacaeus, a Spanish Dominican friar, apparently of English extraction undertook “much pains” gathering materials for a ‘Life of More’ shortly after his death. Pacaeus was said to be “a learned and eloquent man”. It is nice to think that shortly after Thomas More’s death, a Dominican overseas undertook such a task. I wonder whether he had personal connection to the martyr? In any event, sadly death cut short his work, which was then taken up by Stapleton who later published it under the same title which Pacaeus had conceived.

A final aspect, rarely remarked upon, is More’s contribution to language. Ackroyd credits More with introducing into the English language: utopia, shuffle, paradox, anticipate, fact, taunt, pretext, obstruction, monosyllable. He was a man not only of great learning, but great wit, too, so I hope he would approve of this lighter look at his life. Doubtless there are more links, and much more to be said generally of this great Saint. To close, some more of his words, which Dominicans might use:

O Lord,
give us a mind that is humble, quiet, peaceable,
patient and charitable,
and a taste of your Holy Spirit
in all our thoughts, words and deeds.
O Lord,
give us a lively faith, a firm hope, a fervent charity,
a love of you.
Take from us all lukewarmness in meditation,
and all dullness in prayer.
Give us fervour and delight in thinking of you,
your grace, and your tender compassion toward us.
Give us, good Lord,
the grace to work for
the things we pray for.
Amen.
Categories:
Dominicans, Saints