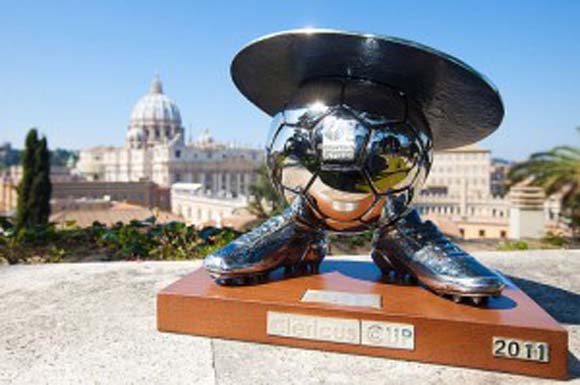 The Biggest Match in Europe

On the 28th of May the Football season closes with the biggest match in Europe, if not the world! No not Manchester United vs. Barcelona at Wembley but the final of the Clericus Cup between the Angelicum, (the Dominican University in Rome) and the Gregorian (the Jesuit University in Rome). A true classico if ever there was. The ‘Ange’ has three Dominican Friars among their players: fr. Juan Carlos Canoles (cooperator brother, Angelicum Librarian, from the Province of Columbia), fr. Emmanuel Albano (doctoral candidate in Patristics, from the Province of Southern Italy) and fr. Mirek Sander (doctoral candidate in Canon Law, from the Polish Province)..
The Angelicum’s boys in blue are certainly seen as the underdogs but have battled through very tough opposition (including a 6-0 battering of the Mexican College) with a well organised team built on the solid goalkeeping of Alsaldi and the individual flair of Javier Ibarra. Comparisons to Manchester City are not totally without justification. For more information click here for the Italian site for the Clericus Cup.  I think it is fairly obvious where this site’s allegiances lie but it should prove a great match.