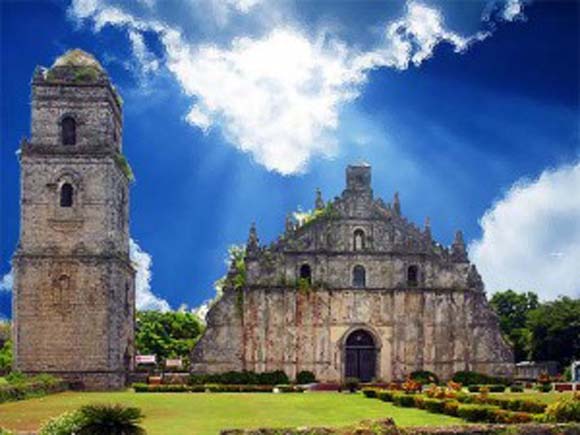 Godzdogz
Home  /  Godzdogz  /  The Catholic Church in the Philippines

The Catholic Church in the Philippines

By Matthew Jarvis O.P.
3.67k
For centuries, the Philippines could proudly proclaim itself ‘the only Christian country in Asia’. East Timor’s independence in 2002 and the recent decades of evangelisation in South Korea, China and elsewhere may have altered the demographics somewhat, but the Philippines is still the major Catholic hub of the region. Over 80% of its population of some 90 millions is Catholic; the rest consists chiefly of various Protestant denominations, the Mormon-inspired Iglesia ni Cristo (INC), and Muslims (especially in Mindanao to the south). Moreover, the Filipino diaspora is enormous, perhaps 11 million by some estimates. This means that Filipino Catholicism cannot be ignored as something distant and exotic; Overseas Filipino Workers (OFWs) are already enriching the life of parishes across North America, the Middle East, the UK and many other countries, and the trend is likely to increase.

Christianity first came to the Philippines when Magellan landed in 1521, but it was not till the 1560s that Spanish political rule began to be established. The country was named after the Spanish king, Philip II – Las Islas Filipinas – and the name has stuck. The Spanish spirit is evident in much of Filipino history, religion, language and culture. The religious orders from Spain, especially the Dominicans, Franciscans and Augustinians, evangelised large swathes of the country, established educational centres (the University of Santo Tomas, run by Dominicans, is the oldest university in Asia), and sent missionaries to even the remotest regions. Sadly, they would eventually become so wealthy and powerful that the Revolution in 1896 would have ‘friarocracy’ as one of its chief targets. At that time, the Philippines’ national hero, Jose Rizal, painted a dark picture of the friars in his novels.

Yet, the history does not end there. Philippine ‘independence’ in 1898 and the period of American control until WW2 saw a large influx of Protestant missionaries as well as the construction of schools and basketball courts everywhere. The Spanish language began to cede to English and the Catholic Church encountered a new plethora of Christian denominations. The Filipino Catholic Church became more authentically Filipino, now that native men and women no longer faced the imperialistic and racist prejudice that had barred them from religious or priestly life in earlier times. In fact, the story of how the first native Filipino priests and nuns bravely and patiently overcame those prejudices from the seventeenth century onwards is told by Luciano P. R. Santiago in The Hidden Light (1987), and To Love and to Suffer (2005). To anyone who feels their religious vocation is being thwarted by external factors, these inspiring histories will demonstrate that nothing can separate us from the love of God in Christ Jesus.


So, what is Filipino Catholicism like today? The Catechism for Filipino Catholics identifies five broad characteristics and relates each to Jesus Christ himself. First, Filipinos are family-oriented; they relate well to the Santo Niño, both as Son of God and Son of Man, and are devoted to his mother, Mary. Our Lady of Manaoag and Our Lady of La Naval draw many thousands of pilgrims each year to their shrines, both under Dominican care. The Blessed Virgin appears according to the Spanish fashion with billowing gown, as seen in this forest of Marian images exhibited in a shopping mall in 2009. 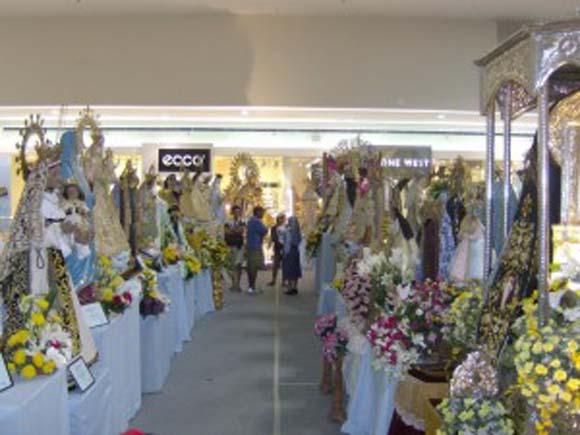 Second, Filipinos are meal-oriented, being known for their hospitality; so they relate strongly to the Eucharist. Since spending a year as a Dominican volunteer in Manila, one of the most moving images I know is this Last Supper, captioned Hapag ng Pagasa (Table of Hope), showing Jesus breaking bread with the children of the slums. 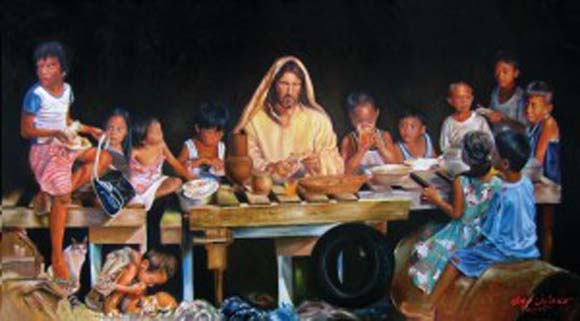 Third, Filipinos draw spiritual sustenance even from sufferings in life, especially from the wounds of sacrificial love; so Christ as the Suffering Servant is an extraordinarily popular image of God to them. Good Friday is dramatically marked with Passion plays in the streets (the Senakulo) and the churches are packed for services of the Seven Last Words. More extreme penitential practices, such as flagellants in the streets and even voluntary crucifixions in some rural parts, persist among some people despite being actively discouraged by the bishops. But it is Hesus Nazareno, the famous image of the suffering Christ, that elicits perhaps the most striking devotion when, on 9 January every year, millions of men and women flood Manila’s streets for an incredibly emotional, and at times dangerously crushing, procession. 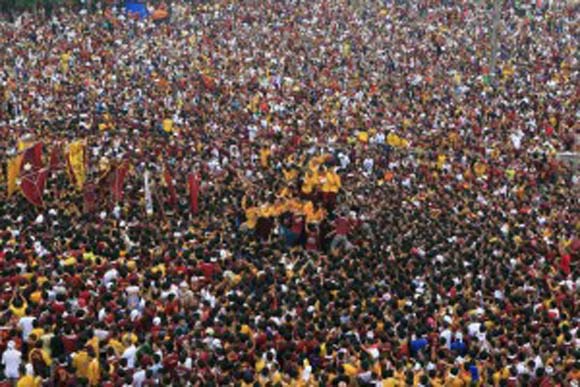 Fourth, they relate to the idea of a hero who will not settle for an unjust status quo but upholds dignity and the ultimate triumph of goodness: Christ as priest, prophet and king (Cristo Rey) is the hero who has ultimately defeated sin and death by his Cross, and thus the Kingdom of God is already among us. In 2009 I joined a Christ the King procession in Manila which lasted for more than three hours.

Fifth, Filipinos are spirit-oriented, holding strong beliefs in supernatural beings of all kinds; they relate to Jesus as a healer and exorcist, who sends his Holy Spirit to dwell in us and bind us together in fellowship. To an outsider these beliefs may appear superstitious at times, but through the Gospel the Filipino Catholic will always prioritise the person of Jesus Christ, whom we worship ‘in spirit and truth’.


Filipino Catholicism, then, has come to conscious maturity by accepting and celebrating both its native and Spanish roots. This is clear from the style and popularity of devotions and practices such as great processions, wakes, block rosaries, and the remarkable Simbang Gabi, or Missa de Gallo, the nine days of ‘dawn’ masses (actually around 4am) leading up to Christmas. The cult of the saints is wonderfully vibrant, too. The first Filipino saint was a Dominican lay associate, San Lorenzo de Ruiz, martyred in Japan in the seventeenth century; despite suffering horrific torture, he declared at his death, ‘If I had a thousand lives, I would offer them all to the Lord.’ Christian art and architecture historically in the Spanish style is now created in a modern, inculturated, Filipino mode. A lovely example is this new icon of San Lorenzo, commissioned for the priestly ordinated of our brother, fr. Lawrence Lew OP, last September.


Catholicism permeates Filipino society, through its schools and universities, its concern for social justice, and its deep orientation towards the family – the ‘domestic church’. On the one hand, the Catholic Faith is challenged in the Philippines, as elsewhere, by the destabilising forces of globalisation, secularisation, and the encroachments of proselytising non-Catholic groups, especially among the poor. But, on the other, each challenge brings new opportunities for growth and a revitalisation of the Catholic culture. Whereas Protestant churches and the INC have been quick to develop media channels for their messages, the Catholics are only just emerging from complacency with such initiatives as ‘The Word Exposed‘, by the newly installed Archbishop of Manila, ‘Chito’ Tagle, or the recent film about the life of St Dominic. Thankfully, there are countless lay associations and ministries, such as the Catholic Women’s League, the Urban Poor Ministry, or the Lay Dominicans, doing wonderful work at every level. 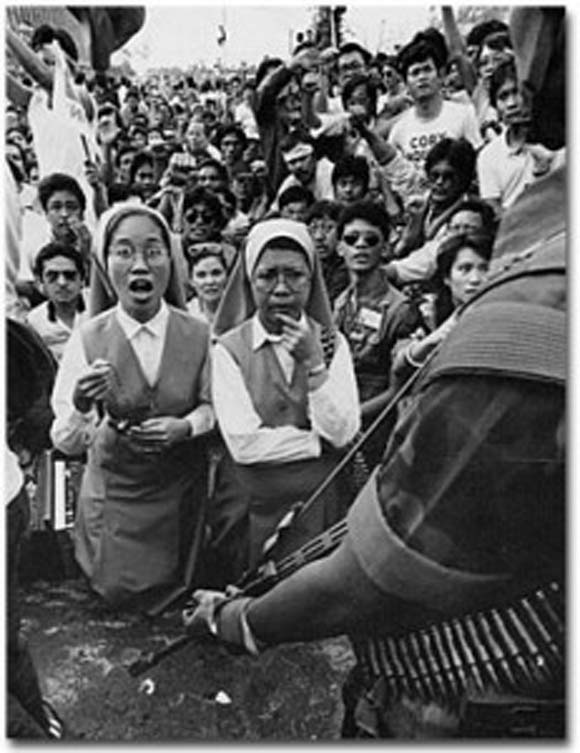 Institutionally, in fact, the Church is powerful in the Philippines. This has drawbacks: bishops are sometimes too closely allied with political camps, and so on. But the Church’s prophetic voice is equally significant. The bloodless ‘People Power’ revolution that toppled the Marcos dictatorship in 1986 was called by the late Jaime, Cardinal Sin, and witnessed religious sisters in the front of the massive crowds on the EDSA highway, facing down the army with only rosaries to defend them.

It may be tempting to think the Philippines is thriving spiritually and should instead prioritise economic prosperity and social justice. This would be admirable, but no panacea. Measures of reform cannot lead to social flourishing unless they first take root in people’s hearts. The Kingdom of God begins with repentance. So the Philippines, no less than any of our so-called ‘secularised’ countries, has a spiritual mission to pursue: to maintain the Church’s ‘preferential option for the poor’ in the fullest sense by making the Gospel find life among the people. 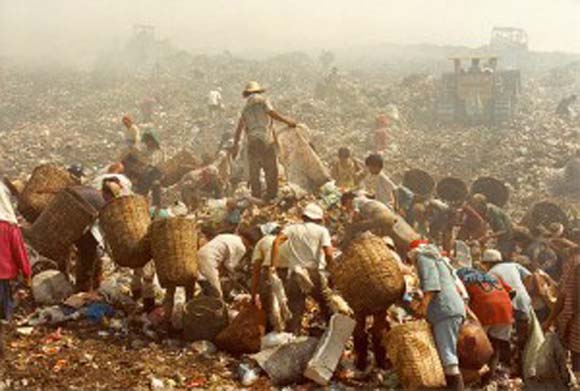 The story of the Smokey Mountain illustrates this well. This infamous rubbish dump in Manila smoulders like Gehenna, yet thousands of people live in the area, usually scavenging for their livelihood. In the 1980s, crime, alcoholism and drug abuse were rampant among the communities; but things improved when Basic Christian Communities (BCCs) were established, led by brave and compassionate priests. The BCCs simply gathered to study the Bible and discuss their problems; in 1989, a parish was erected. The reduction in crime and substance abuse over just a few years was astounding.

Now, the problems have not been eradicated – the Mountain still smokes – but the point is clear. Spiritual renewal is the only way to create meaningful transformation in our lives. And that is where we can learn a lot from the Catholic Church in the Philippines.

Categories:
Church around the World