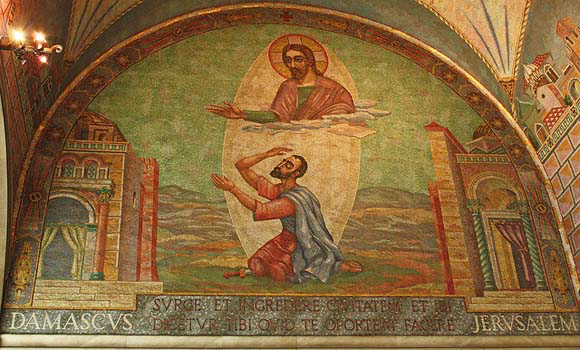 Godzdogz
Home  /  Godzdogz  /  The Conversion of St Paul the Apostle

The Conversion of St Paul the Apostle

Tertullian, no stranger to being victimised by his interpreters, called St Paul the “heretics’ apostle”, indicating the amenability of Paul’s writings to being turned against his own intentions.
Although at first glance Tertullian’s remark might feel a little grubby, the explosion of contemporary interest in St Paul among secular philosophers—from the Marxist Žižek to the Italian jurist Agamben—suggests it might well have been prophetic. Few works have been subject to such a range of divergent readings in recent years as have Paul’s: according to a cursory survey of modern commentators, Paul could be a despiser of the body, an anti-semitic hellenizer, a vicious misogynist, an institutuional conservative turned militant anti-Bourgeouis radical, an antinomian prophet of a universal love movement, the Oedipus complex writ large, or a social reformer who realised the universal significance of Jesus’ life and teachings.
St Paul was himself quite clear about how he preferred to be known and remember: “Paul, a Servant of Christ, to be called an Apostle” (Romans 1:1). Whatever we are to make of these (often slanderous) modern interpretations, today’s feast is a reminder that St Paul was, whatever his great influence and enduring legacy, a Christian. Paul’s conversion on the Damascus road is the only lens through which his life, in all its disparate parts, it’s spledour and its darkness, can be understood as a coherent whole. Anything, then, that we can say about Paul must be made subordinate to the simple fact that he was a Christian, a disciple of Christ. That’s how he asks us to read him; there is no way around it: Paul was someone who recognised that Jesus Christ truly was the incarnate Son of God, sent to reconcile the whole world to Himself, the key to understanding the world’s deepest meaning. And, despite the radically disruptive implications of this truth for his own life, because this was revealed to Paul as true, there could be no sensible way of living except as a follower of Christ the Lord.
So if the Christian can be reminded of one thing by, for example, the Maoist reading of the great saint offered by Alain Badiou (to pick just one example of self-identified atheist readings of Paul), it is that St Paul was not just a first-rate theorist of conversion, his life was a prime exemplar of it. He staked his life on the credibility of what he bore witness to. St Paul was a sinner, whose life was turned around and utterly re-defined by an encounter with the Risen Lord Jesus Christ, who liberated him from bondage to sin: St Paul’s conversion was not a transfer from one static state of belief to another, but a salvation from a movement of degeneration governed by falsehood and sin (a sort of ‘living death’) into the life of sanctification, governed by the grace of Christ, that culminates in the promised trinitarian vision of God in the life of the world to come. Saul becomes Paul, an outward re-designation that indicated an interior revolution.
So, we can agree that St Paul’s conversion was, in Badiou’s words, a “thunder-bolt, a caesura”, not just a new way of thinking. But we cannot follow Badiou in dissecting Paul’s conversion from that to which he was converted to, as if one were indifferent to the other as a container or a prelude. As Paul himself says, in this conversion “the old self has been crucified with Christ. It is no longer I who live, but Christ lives in me.” The form and the content of Paul’s conversion, then, cohere in the Person of Christ, by whom Paul is converted (“put to death with Christ”) and in whom Paul now lives and breathes and has his being (“not I, but Christ”). Paul’s conversion is not merely a change of mind, not a simply ‘eureka’ moment in which he perceives some deeper truth about the world, but above all an encounter between man and God, an event in which a new way of living to, for, and with God in Christ is inaugurated. St Paul’s conversion, a paradigm of each of our own ongoing conversions, is a reminder that those who are sent as apostles are always called to be disciples, friends of Jesus Christ. The apostolic life cannot be divorced from a Christian life, because it is a mode of living out discipleship, a mark of fidelity to our baptismal consecration, a sign of our ever deepening conversion to the Lord’s will.
If I were Paul, then, I might be tempted to take Tertullian’s designation of “the heretics’ apostle” as a compliment, if only by reading it in another way, as the one who is sent to preach the Good News of liberation even to those who try to pin it down in some merely human system. For each of us, of course, living an apostolic life will mean allowing ourselves to be surprised by the ways in which God’s grace exceeds all of our stubborn little hopes. We too will be put to death with Christ, so as to live in such harmony with the Lord that we can say “I, but not I, Christ” and so know first-hand the true meaning of conversion.
Categories:
Saints