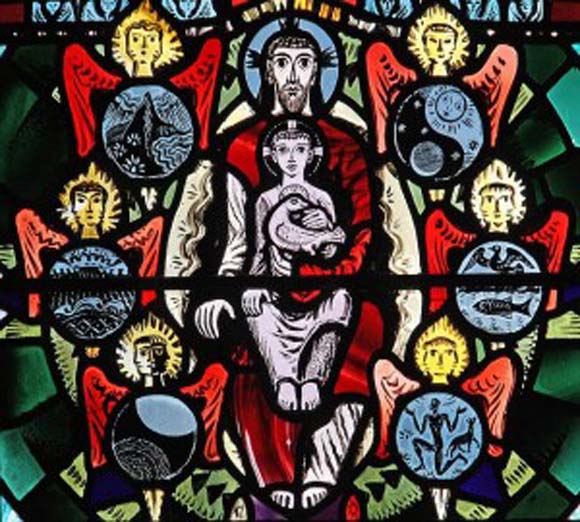 
When we speak about God, it is important to remember that the tools at our disposal are inadequate. Finite human language and finite human concepts can never fully comprehend or incapsulate the infinite God. This must be born in mind when we think about Creeds, or indeed any doctrinal definitions. We know when we recite the Creed that what we mean is true, because the doctrines of the Creed are revealed to us by God; we do not, however, know what we mean. The truth of God is always bigger than we can comprehend. Augustine put it like this:

‘We are talking about God. What wonder is it that you do not understand? If you do understand, then it is not God.’

In the previous translation this was rendered: ‘of one being with the Father’. Here the translators seem to have been looking back to the original Greek text of the Nicene Creed, particuarly to the word homoousion – literally ‘of the same being’. The Council of Nicaea wanted to emphasize, in opposition to the Arians who denied the Divinity of Christ, that Jesus was indeed true God; at the same time they wanted to insist that God was indeed one. Homoousion was the word they eventualy chose to express this faith, and not without some controversy. Homoousion is not a scriptural word and many of the fathers objected to such ‘philosophical’ language being used to define the Christian faith. In the end, however, it was decided that the potential for confusion and misunderstanding was such that a technical term was needed to communicate what has been revealed in Jesus Christ. We know from revelation that Jesus is of the same ‘substance’, or the same ‘being’ as God. Yet we do not know what this ‘substance’ is, because it is beyond the powers of our understanding and unlike any other ‘substance’ in the created world.

Homoousion was translated into the Latin west as consubstantialem. Traditionally this has been rendered into English as ‘consubstantial’, literally: ‘of the same substance’. The translators of the new missal have chosen to follow this older English tradition and stay closer to the Latin text so the new translation now reads: ‘consubstantial with the Father’. This technical term does jar somewhat in the midst of a Creed expressed mostly in more or less every day language, but nevertheless does reflect the deliberate choice of specialist vocabulary on the part of the Council Fathers at Nicaea. Neither the previous nor the new translation are adequate in the fullest sense, because neither can capture the mystery that is the Holy Trinity. Both, however, are able to communicate the idea that the Father and the Son are distinct persons and yet, with the Holy Spirit, one God. The new translation, then, is appropriate given the overall policy of the translators to produce a missal that is closer to the Latin.

This policy of preserving the range of meanings expressed in the Latin also appears to be behind the decision to move from the first person plural (we believe) to the first person singular (I believe). Again, the original Greek from Nicaea begins: ‘we believe’ (pisteuomen), as does the previous translation of the English missal. However, since the sixth century both Byzantine and Latin liturgies have used the first person singular: ‘I believe’ (Credo, in the Latin, pisteuo in Greek). The new English translation has returned to this more traditional position.