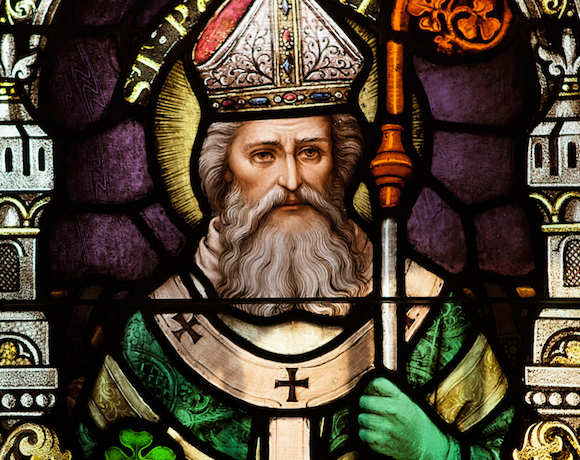 The Feast of St Patrick

On 17 March, people across the world will discover their long-forgotten Irish ancestry, or blithely ignore their lack of any relation to the Emerald Isle, and join together in celebration of St Patrick’s Day. But what’s really behind the celebrations?

For most people, it’s a natural desire to have a party, particularly as the last chill of winter stretches on into March, and spring still seems like a long way away. I was always a little sniffy about the celebrations, that was until I moved into a small lay community in the Presbytery of St Patrick’s, Soho. It’s probably for this reason, in the absence of anyone of Irish descent, that it often seems to fall to me to give a reflection on the Feast of St Patrick.

Soho has an historically large Irish population, and it’s this that accounts for the church’s dedication. The Toucan Pub on the opposite side of Soho Square was one of the focal points of the celebrations, and is, apparently the place to go for the best pint of Guinness in London. So, after having celebrated the Solemn Mass on the feast day, and handed out the last of the shamrock which we had lovingly (reads: somewhat grudgingly) prepared over the previous few days, we would make our way over to break out Lenten abstention from alcohol.

Of course, it was only one of the focal points. The other major focal point was our parish church itself, and over the numerous Masses celebrated on the feast day, people would flock from far and wide to come to Mass and receive their blessed shamrock.

The greatest moments were when people from our various apostolic works, be it the homeless men and women that came to Open House, our parish soup kitchen; or those who were battling addiction with the help of our Cenacolo group; everyone seemed to come along. It was one of the particularly beautiful moments when all of the different people of the parish came together, and showed something of the total picture of the parish’s evangelisation and mission. This, of course, was what was truly behind our celebrations, for we had come together to celebrate the life and witness of a great missionary, and ask for his prayers as we continued our work of evangelisation.

Although very little is known about St Patrick, we can say with some confidence that he was a Romano-British peasant, although we cannot say with any certainty where he was born. Nor can we be sure when exactly he lived, but it seems most likely that he was active as a missionary in Ireland in the second half of the fifth century. As a child of sixteen he was kidnapped and taken slave in Ireland, before which time he was not, according to his Confessio, thought to be his spiritual autobiography, a practising Christian. In Ireland, the kidnapped Patrick was put to work as a shepherd, and he spent much time in prayer and fasting as he came to know God more. He tells us that after six years he began to receive visions, and one of the first was that a ship was waiting to take him home to his family. He escaped from his captivity and ran many miles to the coast to get to the ship and eventually to his family. But having studied for the priesthood, possibly in France, he returned to Ireland as a missionary to help others acquire the gift of faith he had received in that land.

In the very opening paragraphs of the Confessio St Patrick offers a meditation on the gift of faith, and the praise that we owe in return to God for such a gift.

‘That is why I cannot be silent – nor would it be good to do so – about such great blessings and such a gift that the Lord so kindly bestowed in the land of my captivity. This is how we can repay such blessings, when our lives change and we come to know God, to praise and bear witness to his great wonders before every nation under heaven.’

And so if we are to celebrate this great saint, if we are to claim him back from secular culture, we must embrace his example and not remain silent about the great things God has done in our lives.