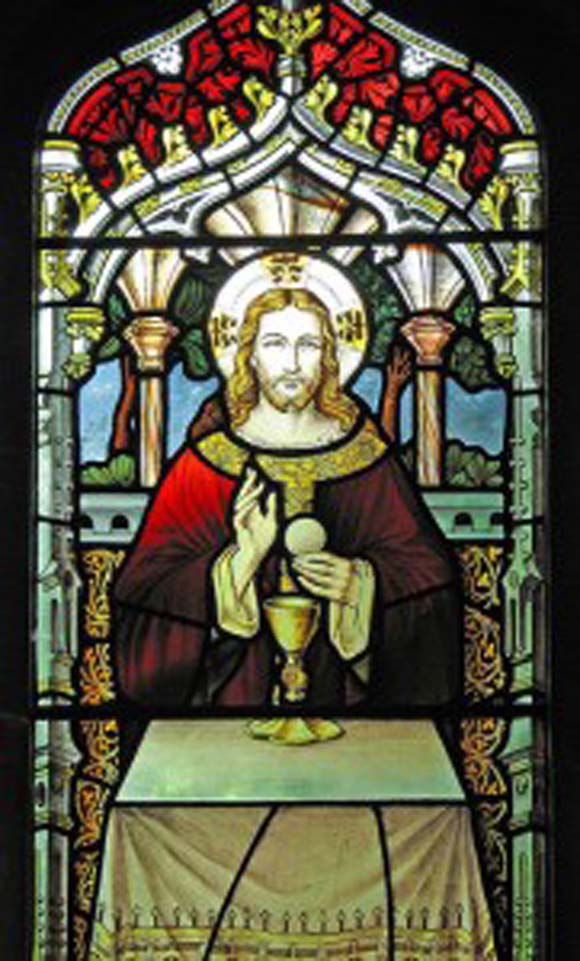 The Fifth Mystery of Light – The Institution of the Eucharist

Why is the institution of the Eucharist included as one the mysteries of light? St. Paul’s First Letter to the Corinthians 11:17 – 34, offers us an opportunity to explore the connection between the mystieries of light and the Eucharist. In this passage we see that St. Paul is addressing the problem of social divisions which have developed in the life of the Christian community since his first visit to the people of Corinth. Overall, the community seems to have forgotten that they are “one body” in Christ by their ill treatment of the poorer members of the community.[1] The wealthier Christians gathered early for the community meal, eating and drinking to excess while the poorer members of the Church such as slaves and others were not able to arrive early enough to partake of the meal.[2] Essentially, this type of behavior created tensions between the wealthy and the poor, even though both rich and poor had “put on Christ” through their acceptance of Paul’s message. In verse 11:20 Paul states: “When you meet in one place then it is not to eat the Lord’s supper, for in eating and drinking each one goes ahead with his own supper, and one goes hungry, while another gets drunk.” The theological issue here seems to be the fact “those who gathered early for the community meal may have thought that they were gathering for the Lord’s Supper but their conduct seems to betray their membership in the church of God.” [3] Paul chastises the community for their behavior by recounting the institution of the Lord’s supper (23-26) to remind them that “whenever the new community celebrates the Lord’s Supper it becomes an announcement of the Lord’s death…For Paul the story of the crucified gives meaning to the meal and in turn prevents members from treating the poor as second class citizens.”[4] Ultimately, Paul reproves the Christian community at Corinth in order to persuade them to abandon their less than Christian pattern of behavior. In the mind of St. Paul, it seems that the institution of the Eucharist by Jesus on the night before he died was an act of total self-gift which we are called to emulate in our relationships with one another. The Corinthians, then and all who eat and drink the body and blood of Christ now, do so in order to become the living presence of Christ in the world; hence one body in Christ. By eating and drinking the body and blood of the Lord, we are not only nourished spiritually but we enter into relationship with Christ, and it is through our relationship with Him that we are transformed into persons who are better able to reflect and share the self-less love of Christ with our neighbors. In the end, St. Paul’s message to the Corinthians challenges us to realize that love of neighbor is the hallmark of the Christian life and that it (love of neighbor) originates in the Eucharistic action of the community as it gathers to hear the Word of the Lord and to receive the great gift of Christ in the Eucharist. Thus, meditating upon the Luminous Mysteries of the Rosary, we can see that the Insitution of the Eucharist is an important mystery of light because it is through our reception of the Eucharist that we are enlightened with the grace of God to recognize the face of Christ in the presence of the “other” in our midst. Approaching the mid-point of our Lenten journey of prayer, pennance and alms-giving, there are two important questions for our reflection: who are our “neighbors” and does our reception of the Eucharist make us more Christ-like, in our relationships or are we more like the Corinthians who failed to recognize the presence of Christ in the poor? As we ponder these questions, may Mary our Mother, through her intercession, help, guide and sustain us in our struggle to be that which we receive.
[1] Raymond F. Collins. Sacra Pagina Vol. 7 First Corinthians. (Collegville, Liturgical Press, 1999), p. 421.
[2] Raymond F. Collins, p. 418.
[3] Raymond F. Collins, p. 419, 21.
[4] Charles B. Cousar. The Letters of Paul. (Nashville, Abingdon Press, 1996), p. 139.
Categories:
Eucharist, Rosary