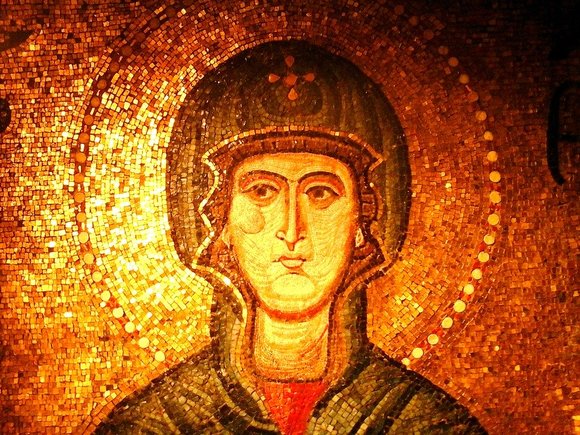 The Immaculate Conception: A hidden baptism

By Br Bede Mullens, O.P. | Br Bede thinks about what the Immaculate Conception might have to do with the shadier side of Jesus’ family history.

Commenting on the genealogy of our Lord (one of the few bits of the Gospel that people tend to think of as boring), the English Dominican Herbert McCabe had the following somewhat interesting thing to say:

“Jesus did not belong to the nice clean world of Angela Macnamara or Mary Whitehouse, or to the honest, reasonable, sincere world of the Observer or the Irish Times, he belonged to a family of murderers, cheats, cowards, adulterers and liars – he belonged to us and came to help us, no wonder he came to a bad end, and gave us some hope.”

I’m afraid I don’t know who Angela Macnamara is, and I have never read the Observer or the Irish Times, but the point is clear enough. People think they can tame the New Testament, and particularly the figure of Jesus; that the point of it all is really just a moral(ising) point. What’s so refreshing about the Old Testament to anyone who takes the time to read it, is that it depicts a world and characters so messed up that there’s not a gloss you could put on the thing to make it any better. Even most of the ‘good guys’ are pretty unsavoury; what makes them good is only that they keep in touch with God. So David sings (Ps. 25 (24).3): “Let none that wait for you be put to shame” – even if they are adulterous murderers like me – “let only them be ashamed who wantonly break faith.” Yet God’s ways are obscure and enigmatic, and the beneficial results of his involvement with this motley crowd will only come to light at the culmination of his designs.

Sometimes one hears it said that Mary is a hinge figure between the Old and New Testaments, and she is lumped into this category with Zechariah and Elizabeth and St Joseph and St John the Baptist. Obviously that’s true in the superficial sense that she straddles the temporal passage from one to the other, and in the sense that she has a causal role to play in the passage (by consenting to the conception of the Saviour). In her own person, however, Mary belongs only ever to the New Testament; even before Jesus Christ came to be born, though still by his redemptive power, she was lifted out of an ignominious family history, preserved from the sin that mars our race. That is the Immaculate Conception.

There are a few stories about in the twentieth century (true and fictional) of hidden baptisms. The most beautifully written I know is Graham Greene’s The End of the Affair. An irreligious lady married to a bore embarks on a passionate love affair – until one day she calls it off. Her spurned lover tries to track her down and uncover the reason; or, rather, who else it is that she has taken up with. But it turns out to be no man at all that has wooed her. After a chance, unthinking prayer, she finds herself preoccupied with God; so preoccupied, eventually, that she must give up her lover. It transpires along the way that as a girl, her mother had secretly had her baptised so as to spite her father; and we are given to understand that that baptism so long hidden in this sequence of events is now revealing its power. It’s that line from the Fr Brown stories – God had her caught “on an unseen hook and an invisible line which is long enough to let her wander to the ends of the world, and still to bring her back with a twitch upon the thread.”

The Immaculate Conception is the first sign of a final twitch upon the thread, a hidden baptism as it were that makes a branch of righteousness spring up from Israel’s arid, soiled and bloodied soil. This dogma speaks of God’s fidelity to a faithless, seemingly hopeless people. If we’re honest with ourselves, we’re all pretty hopeless; if we’re not murderers and adulterers, that’s often just because we are as pathetic at being sinners as we are at being saints. But each of us has stored up for himself the hope that was stored up for Israel in Mary. God does not go back on his promises.

MORE ON: FEASTS, OUR LADY