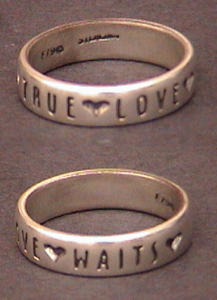 The Life of Virtue – Virginity

Virginity is not seen in a positive light by many in society. The first of the seemingly endless series of American Pie films and the more recent The 40 Year Old Virgin reflect the mainstream view that one’s virginity, one’s bodily integrity and purity, is a social and emotional monkey-on-the-back, that must be kicked as far as possible into touch as early as possible. Virginity has been devalued by society, so much so that people are happy to auction it on eBay. This has of course led to a reaction, especially among Christians. Celebrity virgins, such as Britney Spears and the Jonas Brothers, and the American chastity movements, such as ‘The Silver Ring Thing’, have become one of the cultural markers of both Ronald Reagan’s moral majority and the G.W.Bush era. Movements of that kind are now found across the world and are growing still. However, whilst I sympathise and agree with much that these groups do and say, I find that they do not promote the full meaning of Christian virginity. I always feel that they focus too much on the physical side, especially abstaining from only penetrative sexual intercourse. There is also a tendency to concentrate on the negative aspects of sex such as sexually transmitted illnesses and unwanted pregnancies.

Of course the physical side of virginity is very important – “virginity resides in the flesh“, as St. Augustine says – but the spiritual side is crucial. St. Thomas, in defining virginity, states that this spiritual side “stands in the position of form and complement, because the essence of morality is perfected in that which concerns the reason”. The material element is the integrity of the flesh but the important part is why we keep our virginity. As St. Augustine says, “we do not praise virgins for being virgins, but because their virginity is consecrated to God by holy continency.”

This purpose allows us, even if we are not physically virgins, to recover the virtue of virginity. St. Jerome says “other things God can do, but He cannot restore the virgin after her downfall”. This is true only of the material element of virginity. The formal element, the purpose of virginity, can be recovered. Whilst we may not be in the position to recover the material element, our minds and our souls can be so prepared that we have the purpose of safeguarding this same integrity of the flesh. By practicing the virtue of virginity we imitate our Lord and Mary, His Mother, Who both preserved both material and formal virginity. By practicing the special virtue of virginity, as St. Paul tells us, our focus is directed to contemplating and thinking on the “things of the Lord” (1 Corinthians 7:32-35).