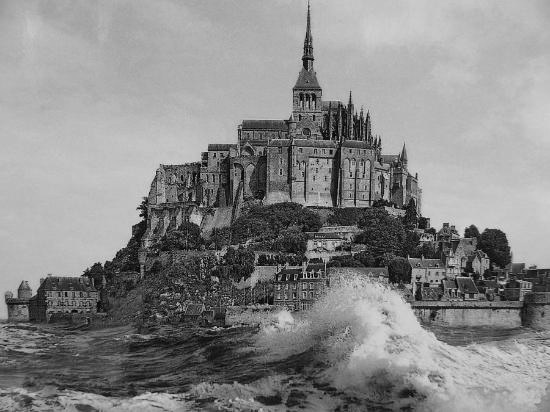 By Br John Bernard Church, O.P | What do we do when we hear the word of God? The image of the house on rock in today’s Gospel is very familiar, but it is one whose familiarity only makes the message it bears all the more urgent.

The Gospel we read today is one that is very familiar. As with many of the teachings and metaphors of the Sermon on the Mount, from which this Gospel is taken, we have heard it so many times that it has become perhaps too familiar. The image is fairly well embedded in our consciousness, the house on the rock and the house on the sand.

The quick take-home message might be clear: build something that is stable and longterm so that when difficulties arrive you will be in a position to deal with them. Or, to say same the same thing from the other perspective, if you go for the quick and cheap option you’ll pay the price further down the line. In short, don’t cut corners. It’s sound advice, there’s evidently some wisdom behind it, and you’d be hard pressed to find someone who disagrees.

But it is bland and it is mundane. It is true regardless of who says it and is the sort of exegesis that sits well with someone who appreciates Jesus Christ just as a great moral teacher of his age, and that’s about it.

This is obviously to gravely misunderstand and misinterpret both Scripture as a whole, and our Gospel for today specifically. The quick take-home message which reduces Christ’s words to something about not cutting corners is as radical an impoverishment of that metaphor as is reducing the Son of God, our Incarnate Lord, to a mere moral instructor. The Word of God is not bland and it is certainly not mundane. It is not reducible to moral platitudes.

So what then are we to make of this metaphor? Well, perhaps the mistake we make in our first reading is precisely what will teach us how to read it properly second time round. Allowing ourselves to internalise the Word of God as mundane, moral platitudes is just the sort of timid reading that Christ is here dissuading us from.

What then do we do when we hear the Word of God? There is no such thing as a mundane, moral platitude that stems from the mouth of the Lord; to treat it in such a way is to build a house on sand, inoculating oneself from its penetrative power, to have a faith that will crumble when adversity inevitably comes. The house built on rock is the Word of God that comes alive in charity, it is to construct a faith built up and fortified by the tangible expression of what we receive. This is a faith that endures.

That leads us then to ask one last question of this Gospel. Why has the Church placed it before us at the beginning of Advent, this time of waiting and preparation, as we look forward to the coming of Our Lord? There are I think two reasons. One is to place before us Our Lady, mindful of her pregnancy during this season, who received the Word of God, nurtured it and nourished it, and let it grow within her such that she was transformed into an agent of human redemption. With her as our exemplar, such too may be our task.

And finally, the Gospel is perhaps also a gentle reminder of another integral feature of this season: as we look ahead to the stable at Bethlehem, pondering over the poverty into which Our Lord was born, it is fitting that care of those most in need is central among our preparations. For faith without works is dead, and what better expression of the charity that brings our faith to life than to let our love stretch to those among whom Our Lord placed himself on arrival into our world. For our Advent preparations will amount to little if they have only taken place inside our own head.