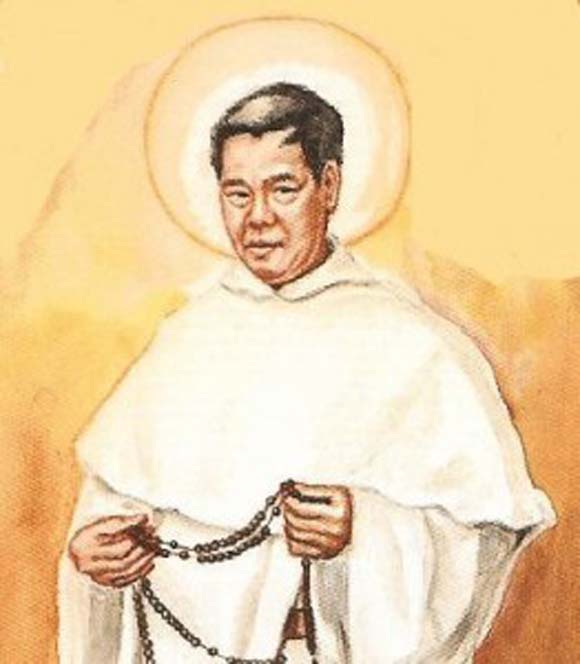 The Martyrs of Vietnam

Today we remember the Dominican Martyrs of Vietnam. Many of them were European missionaries supported by the King of Spain. The Spanish monarch exhorted missionaries to proclaim the faith and cultivate home-grown vocations in the territory. Scholarships were provided for Vietnamese men to study in Juan De Letran College in Manila. One friar to follow this path was Saint Vincent Liem Le Duang.

He was born into the Christian community of Thong-Dong in 1731. From a young age he showed great devotion and ability. He was sent to the Philippines at the age of fifteen and took the habit in 1753. After completing his studies at the University of St. Thomas, he was ordained priest and returned to his native land. As he could speak Vietnamese he started his apostolate immediately. He spent the next fourteen years ministering to Christian communities, teaching at the seminary of Trung-Linh and preaching in the non-Christian areas.

From 1767 the Church in Vietnam came under attack from the authorities. Vincent nevertheless continued to proclaim the Gospel openly,  regardless of the obstacles and threats. He was captured in 1773, beaten and imprisoned. He was placed in a cage and displayed like a wild animal. However the local Mandarin believed that this ritual humiliation would not help the authorities’ attempt to crush the Christian religion. Vincent was released from his cage and allowed to walk about the prison. He took advantage of his relative liberty and preached the Gospel to his fellow prisoners and all who would come to listen. This status was short lived and he was put back in his cage and taken to Hanoi and the Imperial Court.

At the Court the Emperor arranged a disputation between Vincent, a Buddhist, a Confucian and a Taoist. His reasoning, clarity and elegance, in defending the true faith, left a deep impressio, so much so that an Imperial Prince declared the superiority of Christianity. However Vincent’s fate was decided after a stormy dialogue with the Queen Mother. He was sentenced to death and was beheaded on the 7th of November 1773.

The persecutions of the Vietnamese Church would continue. In 1975 the exodus of Vietnamese friars would result in the formation of a new vicariate outside their motherland: the Vicariate of St Vincent Liem. Every day, the brothers of the vicariate, pray for the conversion of Vietnam, through the intercession of St. Vincent. Let us join them today in that prayer –

Dear God,
You have granted the Vietnamese Church
a courageous witness in St. Vincent Liêm,
in order that the seed of faith may bring forth fruits in abundance
on the ground of our country Vietnam.
Accept his intercession
and help us to follow the example he left to us:
courageously to bear witness to Christ
and be faithful to the end.
We ask this through Christ our Lord.
Amen.