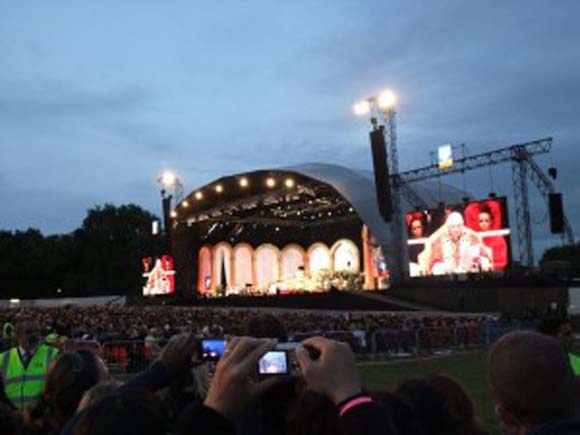 Godzdogz
Home  /  Godzdogz  /  The Pope in London: A View from the Ground

The Pope in London: A View from the Ground

After the successful Scottish leg of the Papal visit, Londoners had a lot to live up to. The Pope’s first day in the capital was certainly more focused on the State elements of this historic visit. Nevertheless the streets of London were full of pilgrims and gold and white certainly were evident throughout Westminster.

The Pope’s second day in London had a more pastoral tone. The main pilgrim event was at Hyde Park, right in the heart of the big smoke. The Prayer Vigil on the eve of the beatification of Cardinal Newman was not only historic for its magnitude but also because a special act was passed to allow a religious event in the park. 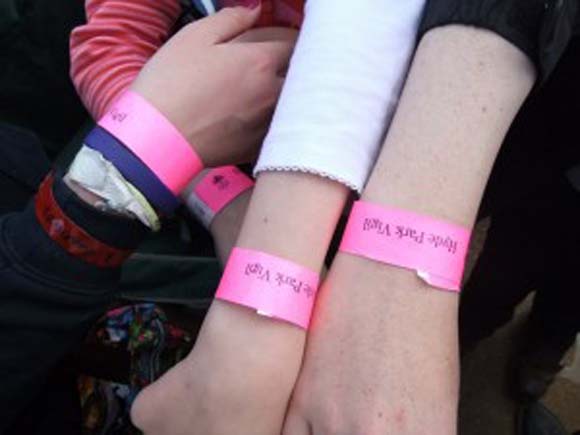 The young teens group from Blackfriars, B.L.E.A.T, decided to join the thousands descending upon London to pray with the Holy Father. We gathered after Midday Prayer and made the short journey to the bus station to catch the Oxford Tube to Marble Arch. We arrived in good time and the shockingly pink wristbands were eventually distributed amongst the excited and energetic teens. We joined the sea of banners and pilgrims and made our way to the venue in Hyde Park.
When we arrived the ground was filling up nicely. Wanting to get a good view we decided to try and get as close as possible . The group decided that I would be best to lead us into the dense crowd. Combining my rusty skills as a prop-forward and seasoned festival goer, I led the convoy of Blackfriars’ pilgrims to a nice little patch, about three bodies deep. Just right for some of our shorter members.
As we arrived representatives of Catholic parishes, schools, organisations and religious orders (including St. Dominic’s, London) were processing with banners to meet the assembled bishops. Seeing such a vast and varied collection of institutions was a snapshot of the work of the Church in this country and of the number of Catholics who serve their communities and the nation in so many organisations as well as in the police service and the military. 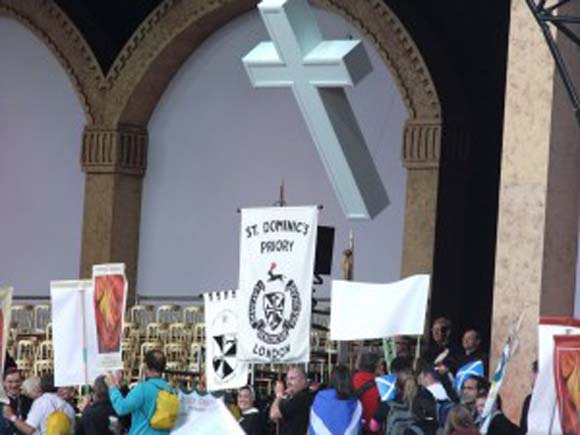 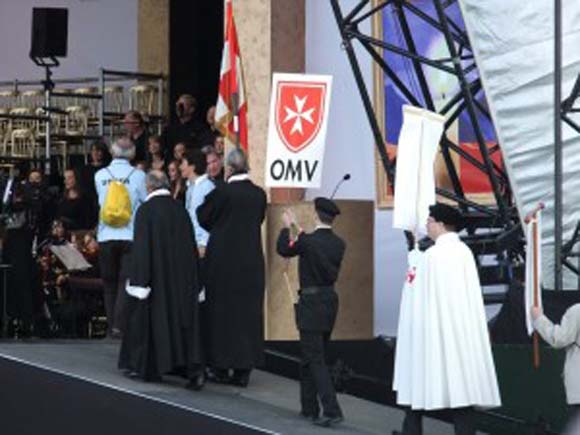 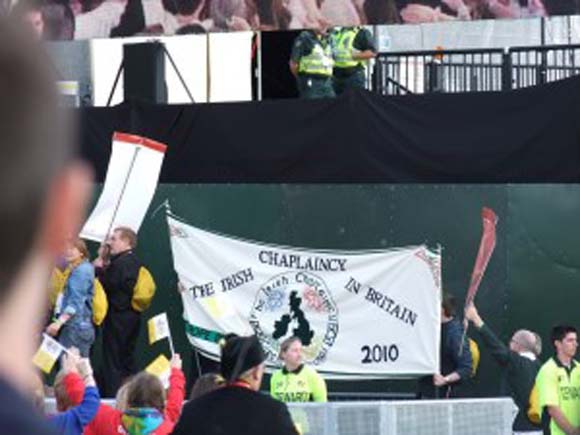 This visual treat was followed by testimonies from individuals, both Catholic and non-Catholic, whose lives had been touched for good by the Church: we heard from an asylum-seeker who had been supported by her parish community; a young-man who had volunteered in a Church aid-programme in Burma; and a former homeless drug addict who had found support in the Cardinal Hume Centre. We also heard from the parents of the murdered teenager Jimmy Mizen. In a heart-breaking and inspirational testimony they recounted their tragedy and how their faith had helped them through this event and to forgive the murderer of their son. 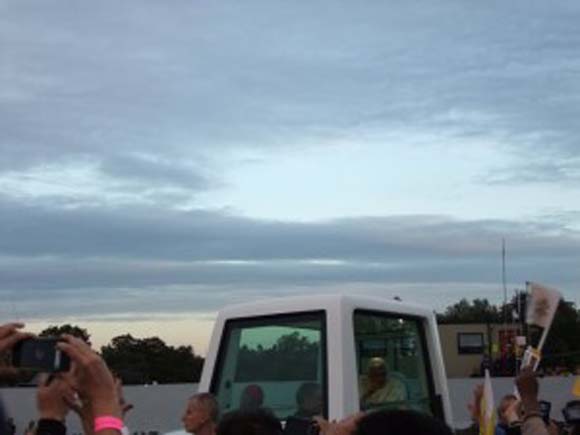 The air was electric as the crowd awaited the Holy Father. The tension was broken when the first images of the popemobile appeared on the big screen. The crowd joined in with the performance of Handel’s Hallelujah Chorus and with perfect timing the gate flew open and the familiar white car appeared. The joy and the excitement that greeted the Pope was immense. It really was like a mega-concert.

The atmosphere changed however as the liturgy began. The crowd listened to a the readings and the Gospel in a dignified fashion. The Holy Father was greeted once again with a great roar as he began to address the crowd. He reflected on the conversion of Cardinal Newman. He pointed out that this was more than just an intellectual conversion, it was a genuine and living conversion that sought a relationship with Truth. The Holy Father reminded the gathering that less than a mile away at Tyburn many Catholics had given their lives for Truth. With these two great examples of witness the Pope called on all Christians not to relegate their faith to the private sphere but to remember that “each of us is called to change the world, to work for a culture of life, a culture forged by love and respect for the dignity of each human person”. This was met with a great sign of approval from the crowd and the Holy Father acknowledged this warmth and joy. He called on the young people present to be open to the voice of Jesus by giving themselves totally to the Lord. He said, citing Cardinal Newman, that this voice will allow us to determine the “definite service” that God has planned for each of us. The Holy Father proceeded to invite the young people present to World Youth Day in Madrid next year. This was once again met with cheers of approval. 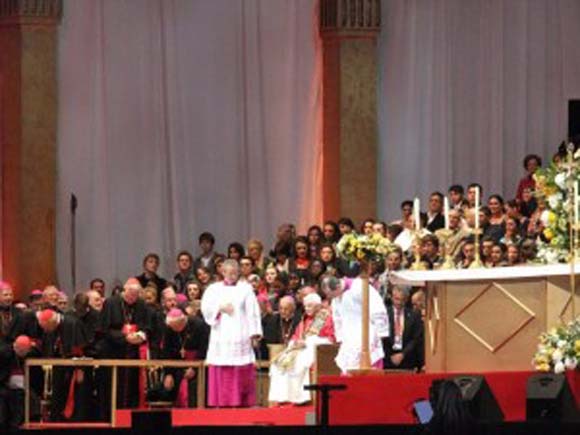 As the Blessed Sacrament was brought to the altar, a reverent hush descended amongst the crowd and those who could, knelt. It was amazing to witness this lively and excited crowd adore the Lord prayerfully and peacefully for a few minutes. A Litany of the Sacred Heart was recited and Tantum Ergo (composed of course by our own St Thomas Aquinas) sung with gusto and reverence. The crowd quickly exploded into cheers and chants again as the Holy Father and the bishops departed. 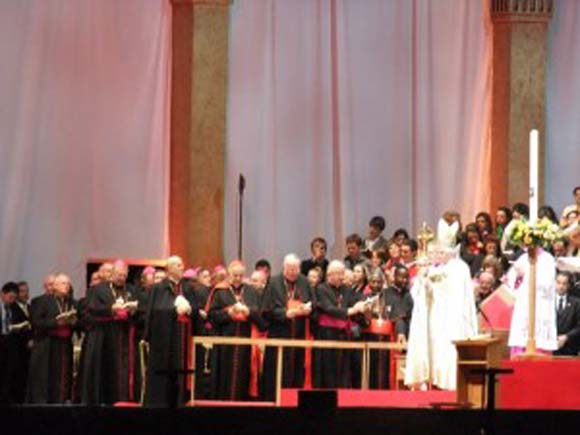 This event truly touched me. It showed the variety and size of the Church but also its unity. First in the cohesion that the Successor of St. Peter brings but more importantly in our shared devotion to the Blessed Sacrament. We are the Body of Christ united through His Body. It feeds our spirits; it gives us the strength to go out into the world to proclaim Him and to share His good news. It reminded me that we are not alone: Christ is with us always. We also have each other, and the gift of friendship, as strong as can be when that friendship is founded on our shared faith in, and love for, Christ. 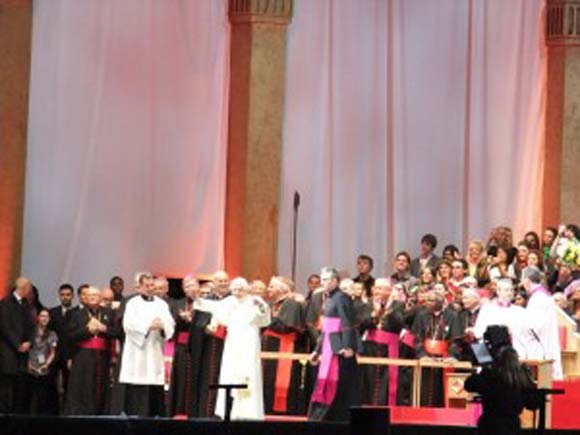 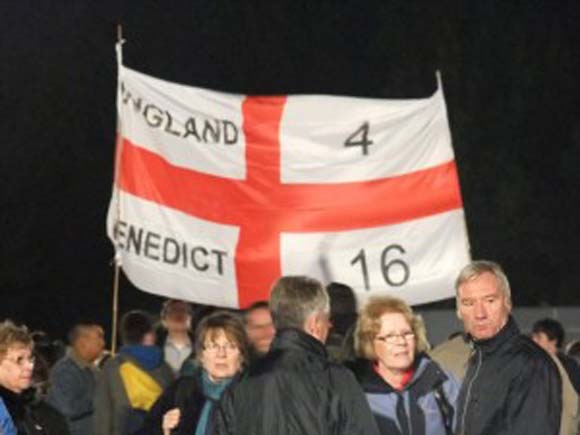 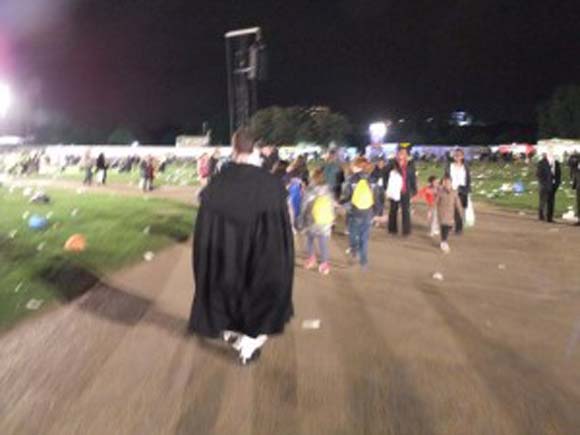