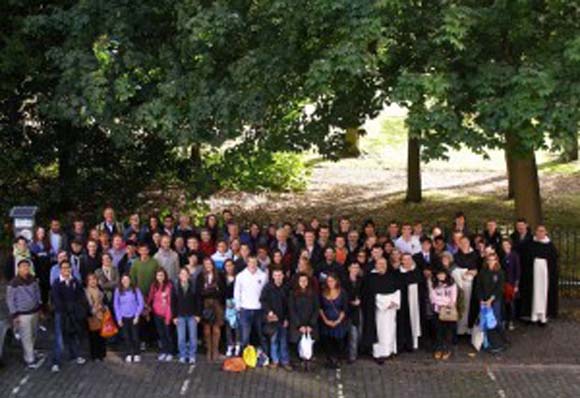 Godzdogz
Home  /  Godzdogz  /  The Pope in Scotland: a view from the ground

The Pope in Scotland: a view from the ground

By Gregory Pearson O.P.
54
After months of preparation, the day of the Pope’s visit to Scotland finally arrived, and things kicked off early in Edinburgh at St Albert’s University Chaplaincy, based in the Dominican Priory on George Square. Some students joined the friars at Lauds to prepare themselves spiritually for the long day ahead, and by 9:30 the chaplaincy common room was heaving with students and parishioners hoping to see the Pope. After a blessing from the Prior, Fr Tim Calvert, one group headed off down to Prince’s Street to see the St Ninian’s Day parade, which followed the route the Holy Father was later to take as he drove through the centre of Edinburgh in the Popemobile, and led the crowd gathered to see the Pope in celebration of St Ninian, Scotland’s first saint, on whose feast day Pope Benedict arrived in the country.

Meanwhile, those of us going to the Papal Mass in Bellahouston Park were issued with our special wristbands before making our way down to the train station for the journey to Glasgow. After a very smooth journey, we arrived in the park just in time to see on the big screens images of the Holy Father’s progress along Prince’s Street at about 12:30. Though we didn’t have the BBC commentary there, news soon got round our group (thanks to the wonders of modern technology) that one of the students back in Edinburgh had been interviewed during the live television coverage, along with Fr Dermot Morrin OP, who had accompanied the group down to the parade.

My first impression of the park was the sheer size of the site, and I think we all found it quite inspiring to see the constant stream of pilgrims, coming from three or four different directions and all converging on the entrances to the park. Despite the prospect of almost a five hour wait for the beginning of Mass, there was a real sense of excitement and anticipation in the ever-growing crowd. During the afternoon, there were live and video performances from Catholic schools around Scotland, as well as video presentations from various agencies of the Church in Scotland (the Scotthis Catholic International Aid Fund, Catholic Scottish Parliamentary Office, Vocations Office etc.), interspersed with rehearsals for the music we would be singing at the Mass. While one might have been forgiven for thinking one was at a pop concert to judge by the reaction of the crowd to the appearance on stage of Susan Boyle, the Catholic singer made famous by the TV programme Britain’s Got Talent, there was nevertheless definitely a sense that this was all secondary, and a build-up to the main event.

The closest view we got of the Popemobile

As the Pope’s arrival drew near, preparations shifted up a gear: we moved on from light entertainment to some rousing hymn-singing (our group, if I say so myself, contributing with particular gusto) as the hundreds of concelebrating priests processed through the crowd to the sanctuary. Then, suddenly, a great cheer went up from one corner of the park, spreading swiftly throughout the congregation: the Pope was here. The crowd was transformed into a sea of Vatican flags, interspersed with those not only of Scotland, but also of Kenya, Poland, Ireland, Angola and Spain (to name the few I noticed and remembered). The Holy Father made his way in a figure-of-eight around the congregation, accompanied by vigorous cheering and waving of banners: even Susan Boyle’s welcome could not compete!

The Holy Father begins the celebration of Mass

The true purpose of our gathering, however, became very clearly expressed for me when, as the Pope disappeared to vest, the commentator called for silence as we got ready to take part in the Mass. In the 70,000-strong crowd, you could have heard a pin drop as everyone in quiet prayer prepared to participate in the celebration of the Eucharist: there was a real sense of unity and common purpose even in that silence, a sense which only grew stronger as the Mass began, and seventy thousand people together with the Holy Father confessed to the Lord and to each other their sins, and their need for God’s mercy.

In his homily, Pope Benedict spoke movingly of the love of Jesus Christ for every human individual, a love in which alone we can find the true breadth of freedom, which the world claims to offer in various guises, but which, without Jesus, ends up being ‘arbitrary and self-destructive’. He called on the Catholics of Scotland to bear witness to this authentic, Christian freedom not only by lives lived in accordance with their faith, but also by presenting it in the public forum as wisdom necessary to society as a whole.

After the homily, we came, of course, as at every Mass, to the Offertory procession and Eucharistic Prayer, during which again there was a tangible sense of the massive congregation’s focus on the altar and the heart of the Eucharistic celebration. Following a joyful exchange of the sign of peace with friends and strangers, we prepared to receive Holy Communion: the sight of hundreds of yellow umbrellas (which sheltered the priests and deacons bearing the Blessed Sacrament) as they spread out through the crowd served as a powerful visual sign, to my mind at least, of the grace of Christ spreading out from the altar and all these people being drawn into his Body by receiving his Body in the Sacrament.

Having received the Holy Father’s blessing at the end of Mass and seen him process out (again accompanied by the sight of thousands of flags and banners being waved by the congregation), we waited until it was our turn to leave the park (about an hour after the Pope had left). Although a little cold and tired, there was a great sense of exhilaration and, indeed, excitement at the experience we had all shared of coming together with Catholics from all over Scotland and beyond to celebrate our common faith together with Pope Benedict, the symbol and guarantor of our unity.

Some of the pilgrims from the Edinburgh chaplaincy

Personally, I thank the Lord for the opportunity to participate in this wonderful occasion, together with a great and enthusiastic group from our chaplaincy in Edinburgh, while on my pastoral placement there! Let us all pray for the Holy Father as he continues his visit in England, that he may bear fruitful witness to the message of Jesus Christ and strengthen Catholics in their faith there, as I’m sure he has, with the help of the Holy Spirit, here in Scotland!