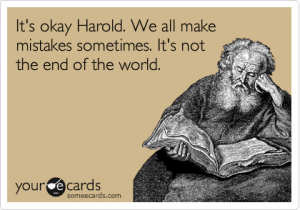 The Pope’s First Tweet and the End of the World

By Matthew Jarvis O.P.
21
So the End of the World has still not yet happened, and perhaps you are tired of all this waiting?

In case you’re on tenterhooks, you can keep abreast of Doomsday live at the Guardian blog.

As for me, I’ve lost count of the number of predicted apocalypses in recent times. Earlier this year, 21 May was announced (then promptly retracted) by the Californian ‘Christian preacher’, Harold Camping. But believing in nonsense normally ends in disappointment. When that date passed without doom, some people were quick to console Mr. Camping:

Of course, Mr. Camping can’t have read his Bible very carefully. For Our Lord clearly states that we cannot predict his Second Coming: ‘Watch, therefore, for ye know neither the day nor the hour wherein the Son of Man cometh.’ (Mt. 25:13) Perhaps we will one day make reasonable predictions when the world will end, not from religious posturing but from scientific observation – of the Sun’s expansion, of wayward asteroids, or whatever. But no such threat is even remotely plausible at the moment and should not trouble our sleep in the slightest.

Far more important is the fact that the Second Coming could happen any minute now, without any warnings or predictions whatsoever. So, although apocalypse is the theme of the readings at Mass at the end of the liturgical year (i.e. just before Advent), it remains relevant now, for Advent is the period par excellence of watching and waiting.

Of course, Advent is not explicitly a preparation for apocalypse, but for Christmas; and it would be foolish to conflate these two! More importantly, we have to reject ‘secular’ understandings of apocalypse, by which people mean the simple destruction of the world. For Christians, ‘apocalypse’ – literally the unveiling, or revelation – is God’s definitive act of re-making the cosmos. So, the end of the world is not destruction, but re-creation: ‘a new heaven and a new earth’ (Rev. 21:1). 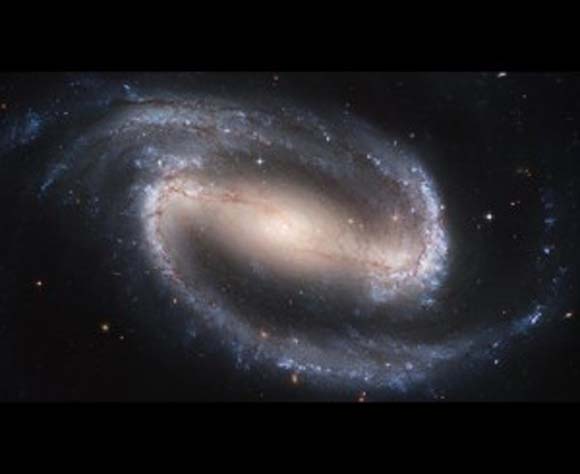 It’s been a good month for earth-shattering claims. A great storm of anticipation arose when it was announced that the Pope, with brand-new Twitter accounts in eight languages, would send his first ever tweet on 12 December (that one in June 2011 doesn’t count because it wasn’t from his personal account…). 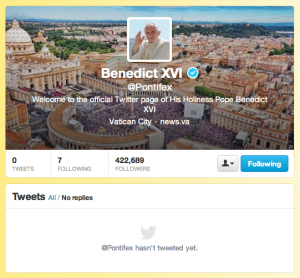 So, without a single tweet, the Holy Father (@pontifex) amassed over a million followers – at least when you add up his accounts in all languages – while not ‘following’ anyone but his own accounts in return. I took this snapshot a little earlier, but by the time his first tweet came out he had over 723,000 followers in English.

And, when it at last appeared, what did the pope’s first tweet actually say?

Dear friends, I am pleased to get in touch with you through Twitter. Thank you for your generous response. I bless all of you from my heart.

With all the hype, the media and the Twitterati quickly pounced on it, according to the full range of rather predictable responses. And immediately, @pontifex achieved a better retweeting record than Justin Bieber.

Five more tweets followed the same day. Look them up (or click image below), if you haven’t already, and notice what @pontifex is saying. He asking predictable rhetorical questions, followed by pithy, profound answers. The format is unusually clipped, but the content is what we’ve come to expect from the man who is at once theologically deep and pastorally precise. No pictures of kittens. No earth-shattering revelations. Just apparently Business as Usual for the shepherd of Christ’s earthly flock. Small wonder, then, that the hype has largely subsided. The Pope is a Catholic! No news there….. although The Onion imagined some humorous alternatives (‘I’m still catholic I just don’t go to church or believe in jesus [sic]’).
But can Pope Benedict keep up this online activity? Breaking out into the Twittersphere was one thing, sending a great message for the Church and modern connectivity; but is it necessary or even beneficial in the long run? In fact, the Vatican confirmed that subsequent tweets would not be posted by the Pontiff himself, though ‘it’s always going to have his engagement and his approval’. @pontifex won’t follow other accounts (how could he/they possibly choose?), won’t crack jokes, won’t retweet or use the hashtag. In effect, the Pope is not ‘on Twitter’, in the normal sense of that phrase. It would absurd if he were. 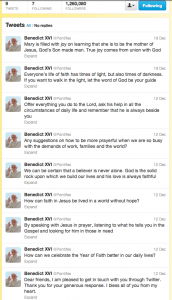 That does not obviate the possibility of other meaningful papal interventions in secular public discourse. Witness Benedict’s article in the Financial Times, just three days ago, perhaps the first time a pope has ever written for a secular newspaper. Recall, too, how Christmas 2010 saw the papal debut on the BBC’s Thought for the Day. These are incredibly significant acts, almost necessitated by the global growth in social networks. We could almost say, it’s not enough that the Pope is the Pope: he must be seen to be the Pope! In so doing, he is reassuring those of us Catholics who are active online, that what we do here can be a fruitful work for the sake of Jesus Christ and his Gospel.

This work of the New Evangelisation is a participation in God’s own fructifying providence. God is always doing new things, always re-creating.

See I am doing a new thing!
Now it springs up; do you not perceive it?
I am making a way in the wilderness
and streams in the wasteland. (Is. 43:19)
So it’s time to prepare – the best is yet to come. The world has not ended with a cycle of the Mayan calendar; nor with the advent of @pontifex to the world of social media. It is Christ’s coming at Christmas which we wait for in hope – an event far greater than a mere tweet, even a Papal Tweet.