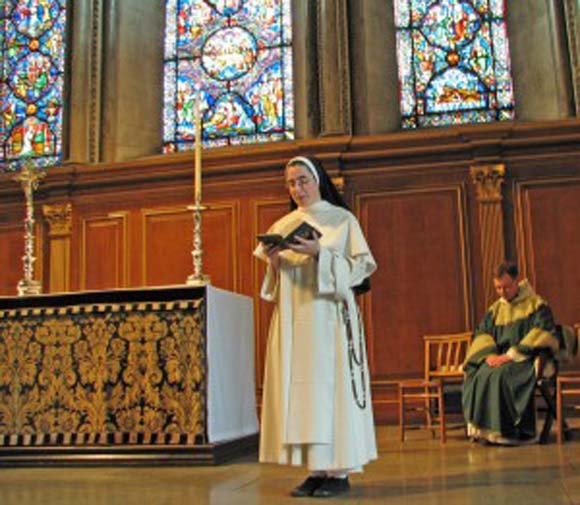 By Lawrence Lew O.P.
288
The summer brings opportunities for a diverse range of pastoral placements for us Dominican students. Last weekend, the Dominican Sisters of St Joseph organised the ‘John Paul II Pilgrimage’ and I was one of three Dominican friars who went on the pilgrimage. This was the second time the pilgrimage has been held, and it involves a 50-mile walk along most of the medieval pilgrim’s route from Ely to Walsingham. Almost 30 young people and religious walked on this pilgrimage, praying for the conversion of England & Wales.

We began on 12 July with Mass at Ely Cathedral. It was a rare privilege to be allowed to celebrate the Mass in St Etheldreda’s chapel. We then walked to the Catholic church in Ely where we spent our first night. Some of us actually slept in the church! 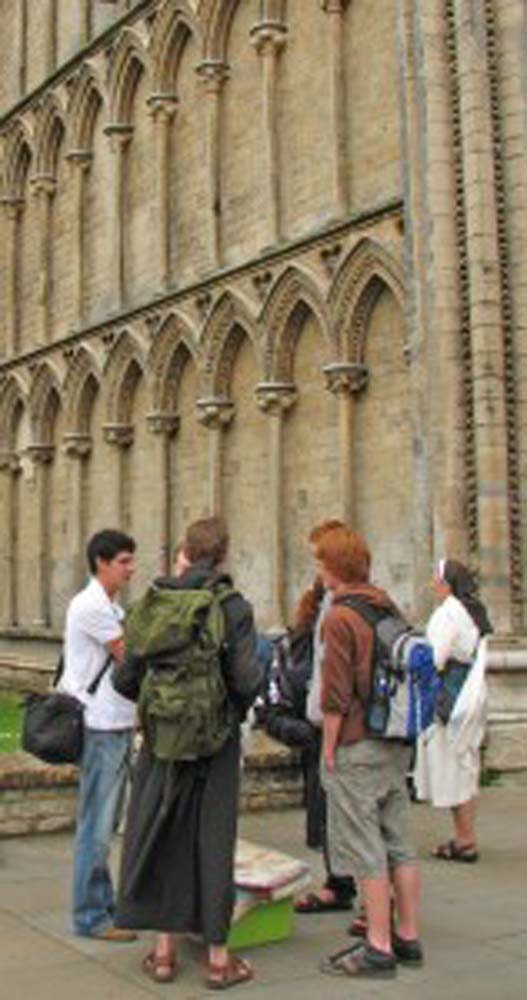 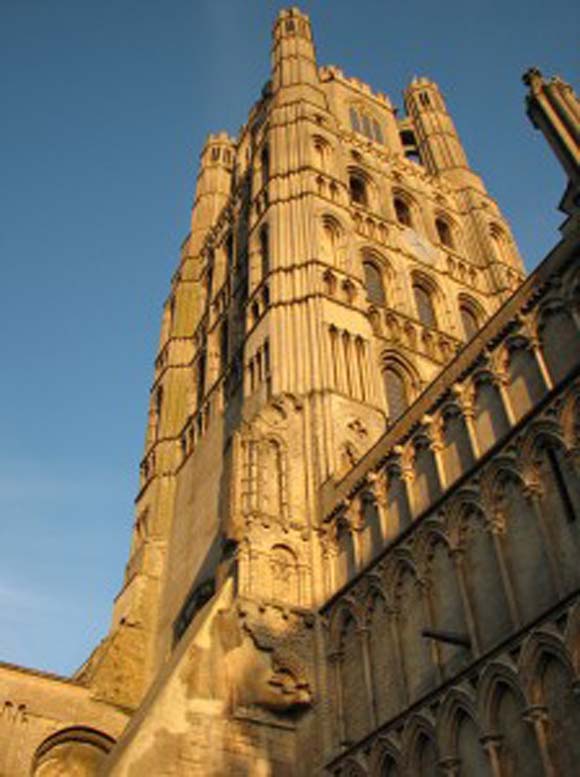 The next morning, we went to Brandon and celebrated Mass with the parish. We were treated to a good breakfast and then set off on a 21-mile walk to Swaffham.

As we walked, we prayed the Rosary, a talk reflecting on the meaning of the Pilgrimage was given by Sr Hyacinthe OP and there was opportunity for confession along the way as we had two Dominican priests and a Benedictine monk with us.

Below is a banner made by one of the pilgrims which we carried along the way, followed by assorted photos from the walk through the beautiful Norfolk countryside: 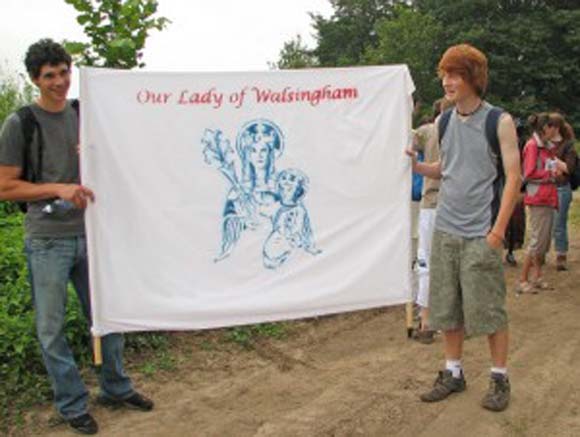 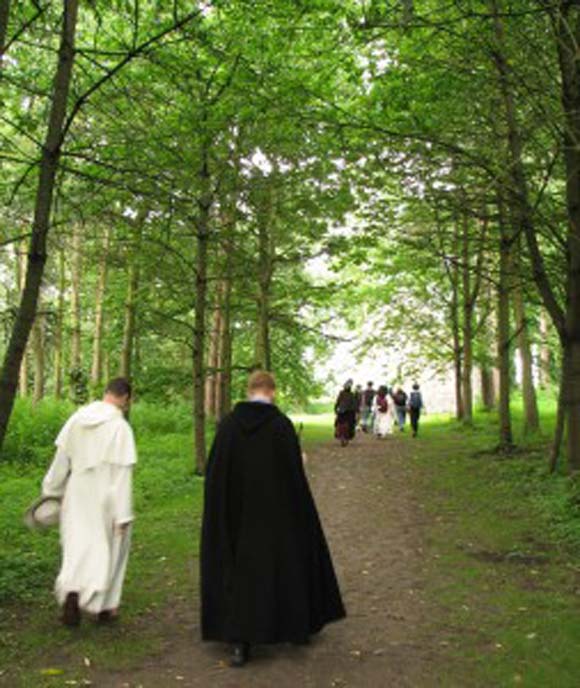 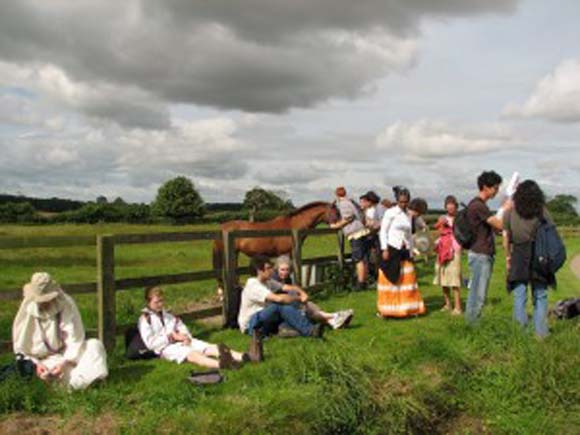 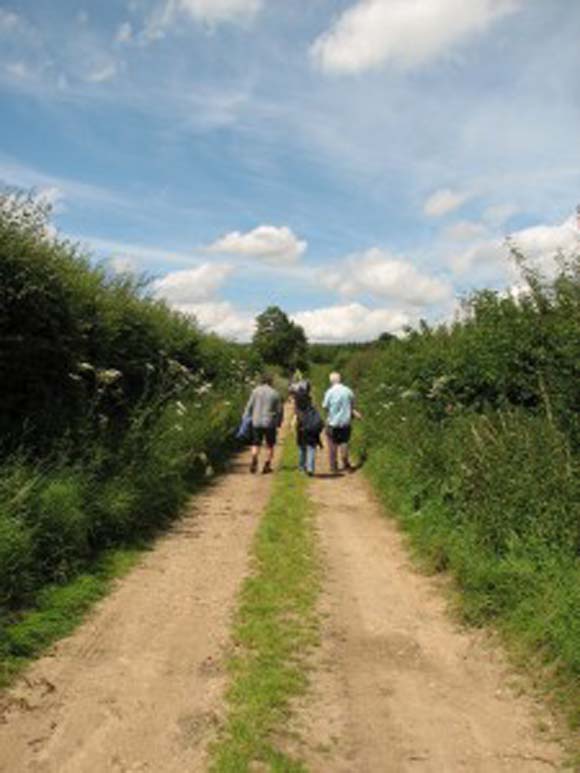 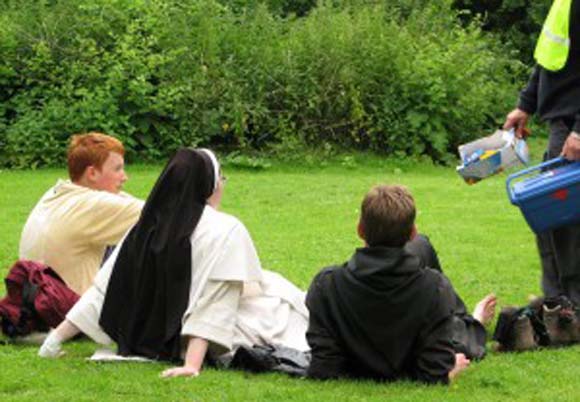 Arriving at Swaffham, many went to soak their feet in water, others dashed for a shower, and some even proceeded to play football! Every night of the pilgrimage, we ended with Benediction and Compline and began the next morning with Lauds (Morning Prayer). In this way, we enveloped our days in the prayer of the Church.

The next day we walked to Helhoughton, pausing for Mass in the magnificent ruins of Castle Acre Priory, the first Cluniac monastery in England. We believe this was only the second time that Mass has been celebrated there since the Reformation. The first time was last year on this same Pilgrimage. Fr Benjamin Earl OP was the pilgrimage chaplain and he celebrated Mass for us each day and preached. 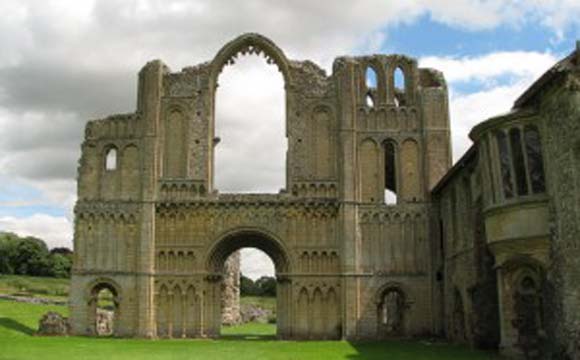 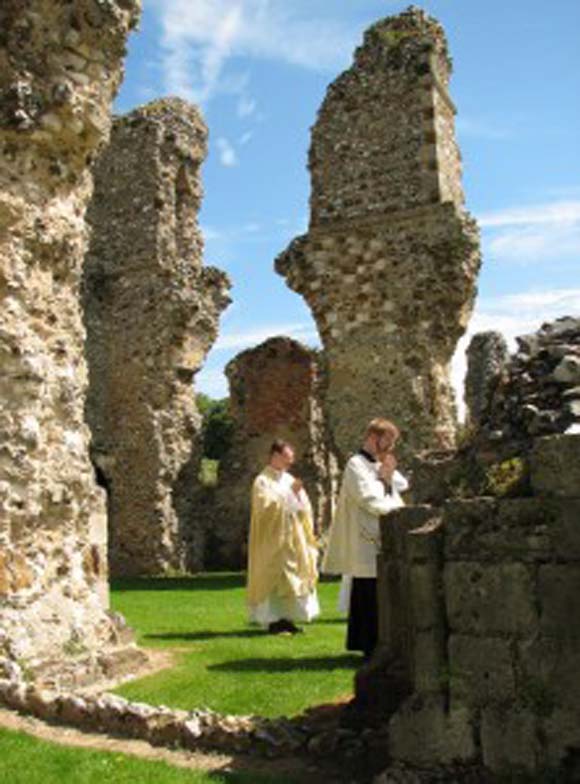 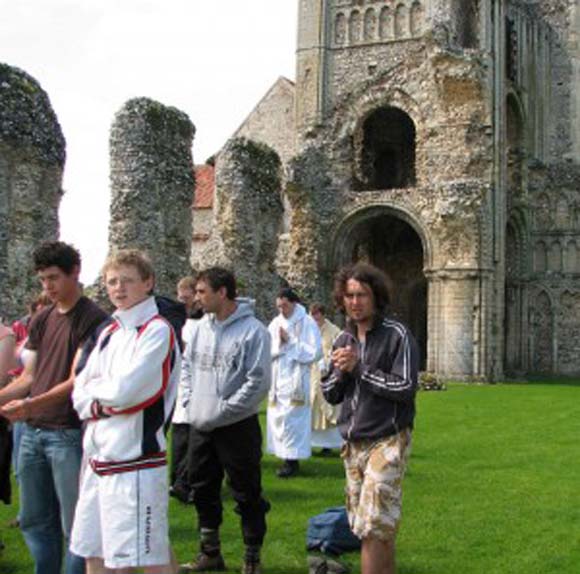 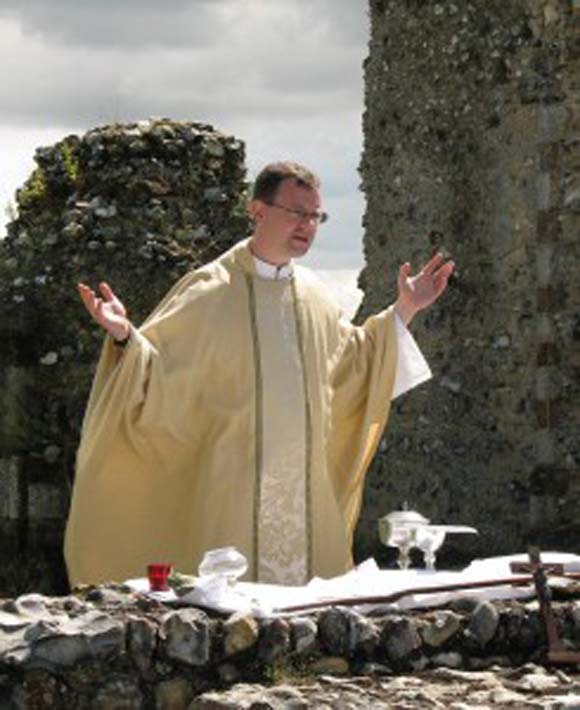 The next day, we walked the final stretch into Walsingham where the bells of the 14th-century Slipper Chapel rang out to welcome us. It was a most joyful sound which mingled with the hymns we sang as we approached the Shrine. We were welcomed by the Shrine Director and joined in the Pilgrim’s Mass at 12 noon. 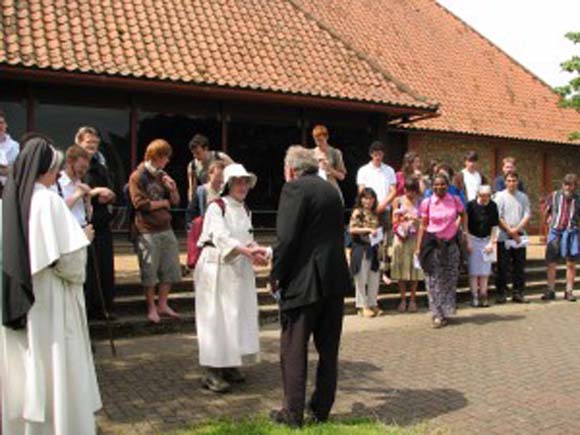 After setting up our tents, we walked the Holy Mile into the village. Some chose to walk barefoot as an act of penance. Benediction followed in the parish church of Walsingham, and then we visited the ruins of the Augustinian priory where Our Lady’s Holy House once stood. The heavens opened, but we were fortunately snug in a pub, listening to Dom William Wright OSB talk about the ‘Theology of the Body’. That night, we camped in the fields around the Shrine, singing and celebrating late into the night. 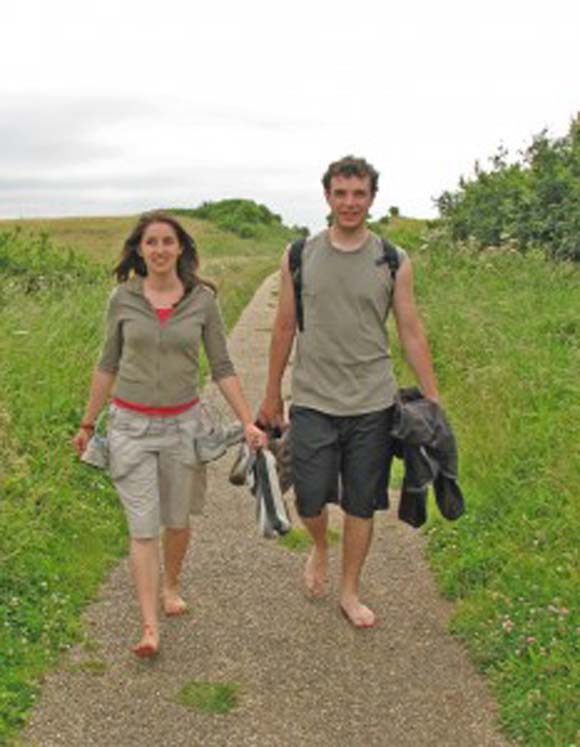 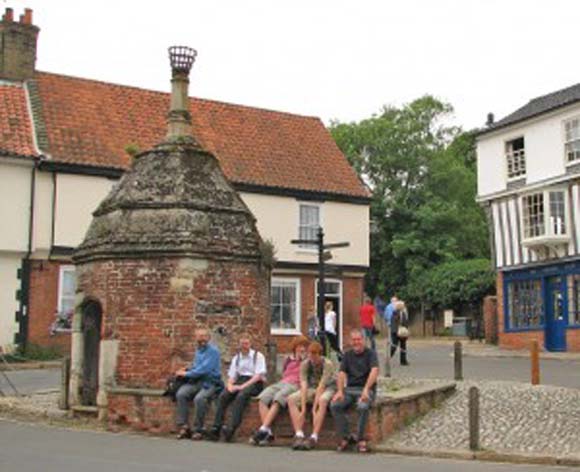 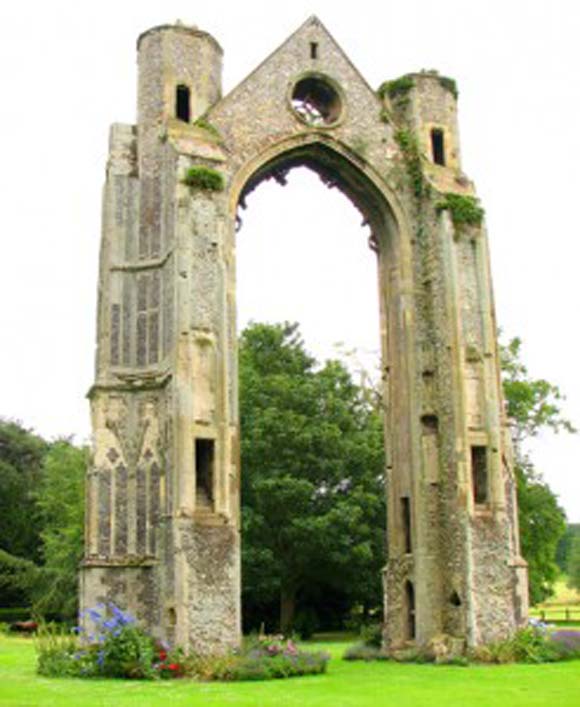 The final morning, 16 July, was the feast of Our Lady of Mount Carmel and we ended the pilgrimage with Mass in the intimate space of the Slipper Chapel. 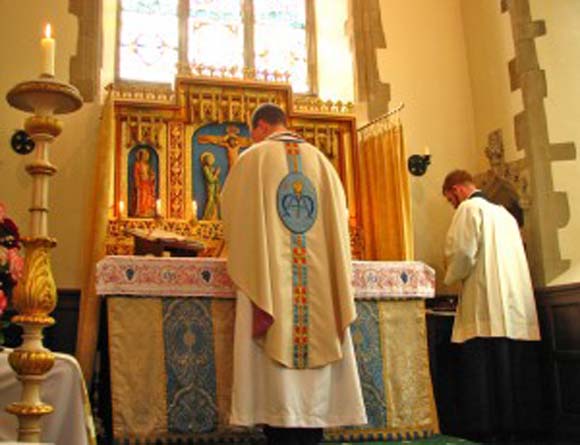 It was a beautiful way to end our 5-day journey together and we were sent out, back to our homes and communities to bring something of the love, joy and peace that we found on the Walsingham Way. 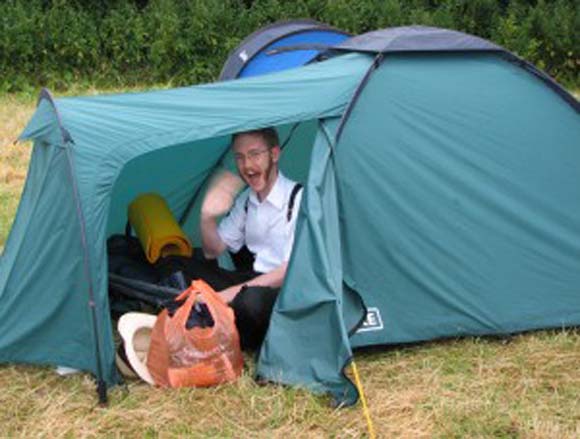