‘What are Pope Francis’s links with the north east of England?’, is not, I imagine, a question that has crossed your mind recently. Perhaps you would be surprised to be learn that there was one link, let alone two?
Well, the first is pretty trivial, unless you’re a fan of the Black Cats, in which case you may well remember Pope Francis holding a Sunderland football shirt, presented to him by Fr Mark Lyden-Smith, the club chaplain, on a visit to the Vatican.*
The second link concerns Pope Francis’s Episcopal motto, which he chose on his appointment as Archbishop of Buenos Aires and has kept as Pope. The motto reads, ‘Miserando Atque Eligendo’. There are differing translations, but the one which I think best captures the sense of the words is: ‘by having mercy and by choosing’. These words capture the dynamic nature of God’s mercy that Pope Francis is so keen to emphasise.
‘What, though, is the north east connection?’ you may, or may not, be clamouring to know. Well it’s the fact that these words are not taken directly from Scripture, but from a homily of the Venerable Bede, who was born near Sunderland and spent most of his life in the monastery of Jarrow on the Tyne.
The homily is on the call of the tax collector, Matthew, recorded in Matthew 9. The particular verse reads, ‘As Jesus passed on from there, he saw a man called Matthew sitting at the tax office; and he said to him, “Follow me.” And he rose and followed him’. Bede comments as follows:
Jesus, therefore, saw the publican, and because he saw by having mercy and by choosing, He said to him, ‘Follow me’. ‘Follow’ means to imitate. ‘Follow’, He said, not so much in the pacing of feet, as in the carrying out of morals. For whoever says that he remains in Christ, ought himself to walk as He walked: which means not striving for earthly things, not eagerly pursuing fallen riches, fleeing honours, willingly embracing all the contempt of the world for the sake of heavenly glory, being advantageous to all, loving, occasioning injuries for no one but patiently suffering those caused to oneself, but seeking always the glory of the Creator, as often as one can raise himself up toward the love of those things which are above. This is what acting in that way is. This is following in the footsteps of Christ.
The key point for me in this message is that God’s loving mercy is transformative. It calls us to be Christ-like. It is something much richer than not punishing us as we deserve: it is loving us into what we have the potential to be. This is so much more beautiful than the passive notion of mercy we often urged to settle for. Such a passive notion often boils down to ‘live and let live’. It’s a form of indifference and it blights so many lives. It’s what allows us to see injustice, and feel for the afflicted, but do nothing: neither praying, nor fasting, nor acting in some other way.
Other than God, nobody has loved me more in my life than my mother. Yet – and I suspect in this I’m not the only one – she is also the person who has nagged me more than any other; who has given me more scoldings that any other; and who has called me to account more than any other. Why? Because parents, through the eyes of love, see what we can be. They simultaneously love us for who we are and seek to change us to be the best that we can be. More than any other people on earth, I think it is our parents who are closest to looking at us as God does.
The paradox of loving someone so much you want that person to change is something modern thought seems incapable of coping with. The nuance of thought required to say that a particular aspect of a person’s life needs change, whilst still seeing the fundamental good of that person’s very being, seems beyond many. I think this is because we have lost the ability to see the basic dignity of every human being by the very fact of their existence. 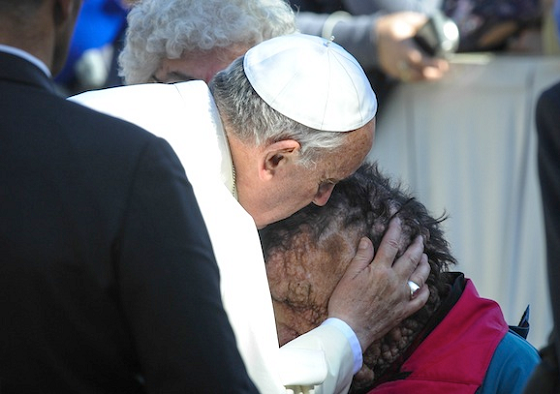 Pope Francis sees this. It’s why he would kiss the man whose skin condition causes many to not even speak to him. It’s why he wants the Church to break out beyond its institutions and bring the loving gaze of Christ upon people on the margins; to look with mercy and to see that the person was made for greatness; and to exhort them to greatness by following Christ.
* Incidentally, that very weekend Sunderland won 2-1 against their Tyneside rivals. This was not a good result for Dominicans who have strong connections with the city of Newcastle, having arrived there in the 13th C. According to some, Newcastle club colours are a deliberate imitation of the Dominican habit:
Looking at the history of Newcastle United FC there seems to be only a couple of theories of how the club in 1884 eventually came to play in their colours. One concerns a couple of magpies thought to be nesting in the stands at the time, and therefore thought to have some bearing on the decision. The other, concerning a certain Fr Dalmatus Houtman OP, is far more plausible. He was a Dominican friar from Blackfriars Priory in Newcastle who used to watch the team from a hill at St James’ Park. Such was his influence generally upon the club – he was believed to be a member of the board – his colours were adopted by it.
You can read the full story on Dominican football connections here.
Categories:
Mercy, Pope Francis, Year of Mercy