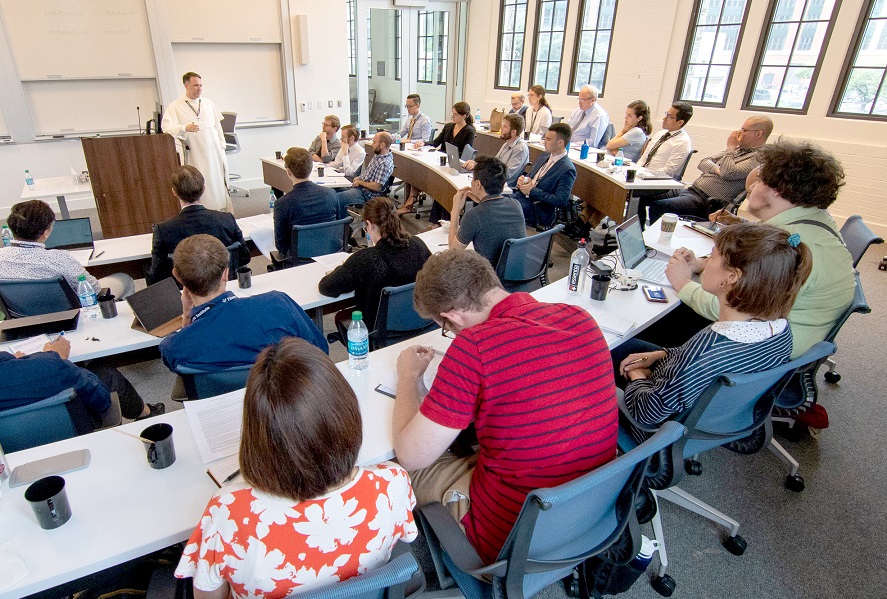 A Community of Thomists

Br Albert Robertson OP writes about the collaboration between the Washington DC-based ‘Thomistic Institute’ and the brothers in Blackfriars and the Aquinas Institute in Oxford, and its potency for creating communion between scholars, students, and seekers who are interested in the riches of the Catholic intellectual tradition.

In the time since I was asked to help begin a chapter of the Thomistic Institute in Oxford nearly two years ago, we have certainly come a long way. Our collaboration with the Thomistic Institute in Washington DC has been a really valuable way of making the intellectual traditions of our Order, but also the work of our Hall and Studium in Oxford, more accessible to a wider audience within the University of Oxford and the broader community in the city.

This summer began a new phase in our collaboration when I was lucky enough to be able to travel to Washington DC to participate in two conferences run by the Thomistic Institute, one for the student leaders of their different chapters around the USA and Europe, and another run in collaboration with the Institute for Human Ecology (IHE) at Catholic University of America.

The Civitas Dei Fellowship, run in collaboration with IHE, was a ­graduate-level conference introducing participants to the Catholic intellectual tradition on questions of the common good from Augustine, through Aquinas and his commentators, to the legal philosophy of the late Justice Antonin Scalia. The conference showed the rich and broad tradition which the Thomistic Institute is trying to transmit to young aspiring intellectuals, and equipping these young men and women with the necessary contacts and relationships to try and transform academic life in their respective institutions. Many of the participants were law students, or studying for degrees in political science and related disciplines, and so the week offered the opportunity to speak to people from outside the world of academic theology about common experiences and hopes and plans for future research and collaboration.

The second conference was for campus chapter leaders and committee members, and had both an academic and a practical purpose. We were joined by Prof Ed Feser as well as staff members from the Pontifical Faculty at the Dominican House of Studies to provide an introduction to Thomistic theology and philosophy, but also to share our experiences of running chapters in our respective locations. It was a real sign of hope to see the student leaders of so many chapters enthusiastic and energised for the work that is ahead this academic year.

As in previous years our chapter in Oxford will be hosting a number of lectures which will complement the work of the Aquinas Institute, but this will also hopefully be a year when we can expand the range of events which we put on. This will not only involve some day conference events, but we are also hoping that we might be able to run something similar to the Civitas Dei Fellowship so that we can welcome students from across Europe and the USA to Oxford – an ideal place to explore the Catholic intellectual tradition.

Across the ten days that we were participating in these conferences in Washington DC, time and again we returned to the question of community, and this was not just something which we spoke about in practical terms at the conference for student leaders, but was also something which we experienced across the days that we were there. Much of our initial work with the Thomistic Institute chapter was aimed at ensuring that a good number of people attended the lectures, and that they represented a wide cross-section of the life of the university and the city, and by and large this has been our experience across the events we have hosted over the last couple of years. We have certainly been surprised at how many people have come, and how this seems to have answered a real need within the student body and wider community.

Importantly, these have not just been Catholics but people from different Christian traditions, and also those who are not Christian or who do not believe; and this is particularly important, because the Thomistic Institute is not designed to be Catholics speaking only to Catholics, but to draw other people into a community seeking after truth. When one spends time speaking with students there can often be quite a feeling of isolation, not always because of a loneliness, but simply because at times, by its very nature, academic life can be an isolating pursuit. In Oxford, terms are short and pressured, and it can often foster the feeling that community and friendship is something formed in one’s spare time, once the essay is written and the lectures attended. But the work of the Thomistic Institute places the experience of communion at the very centre of the intellectual enquiry, in fact it’s part of what roots it so firmly in the Dominican tradition.

This year will be a busy one for the friars and students who organise the activities of the Thomistic Institute in Oxford as we seek to expand not only the number and type of events, but also as we try and deepen the sense of community among participants, so please continue to pray for these endeavours, and to spread news of our work.