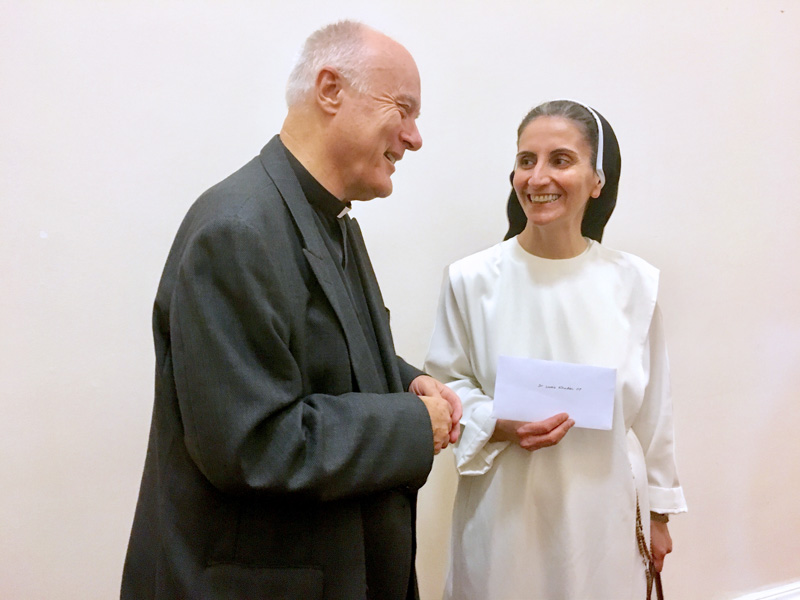 A Dominican sister held a central-London audience spellbound as she spoke about her congregation’s work in the rebuilding of the Christian communities of Iraq, following the devastation wrought by ISIS. The meeting was held on 11th October by Aid to the Church in Need, which had organised a UK tour by the Dominican sister and others from the suffering Church.

Sr Luma Khuder OP of the Dominican Sisters of St Catherine of Siena told the meeting at Notre Dame University’s base in Westminster that Christian refugees from her region had been living in container homes for three years. Most of the refugees had found safety in the Kurdish autonomous region. Here the sisters had established schools, helped traumatised families and organised catechising of the young. Within three years one of the pre-fab schools that they had established was recognised as one of the best in Erbil, the Kurdish capital.

‘To make sense of what had happened to us we turned to the Bible,’ she said. ‘We found that the psalms of exile, with their bitterness and lament, spoke to us. We also found ourselves asking the question of Ezekiel 37: Can these dry bones live? But the faith of the people remained strong.’

When the Christian towns like Qaraqosh were liberated in 2017 and the refugees returned, they were, she said, totally shocked. ‘Everything had been destroyed, with particular care taken to smash altars and crucifixes.’ 15,000 homes had been destroyed in the region. Now in Qaraqosh you can hear the sound of hammers and tools everywhere as people rebuild. However, many of the people are now dispersed in other countries. So far 42% of the pre-war population has returned.

Sr Luma paid particular tribute to the work of NGOs. ‘Without the worldwide Church we would not have survived one month’, she said. ‘When their help came it was like a miracle.’ The challenge of rebuilding has brought the churches closer together to plan and work co-operatively. In March 2017, the Syriac Catholic Church, the Syriac Orthodox Church and the Chaldean Catholic Church formally established a body, the Nineveh Reconstruction Committee (NRC), whose task is to oversee and plan the repair and rebuilding of almost 13,000 family homes. Over the Nineveh plains as a whole there are 363 Church properties that were attacked by so-called Islamic State which now need to be repaired or rebuilt. Of these 34 were totally destroyed, 132 were set on fire, and 197 were partly damaged. In one village alone, Teleskuf, there were 1104 private homes and 21 Church properties that were damaged by ISIS.

After the meeting Fr Terry Tastard presented Sr Luma with a donation of £750 for the work of the sisters in Iraq (main picture). The money had been donated by the Priestly Fraternity of Our Lady of the Rosary, a tertiary fellowship of diocesan priests to which he belongs, affiliated to the Dominican Order in Britain. The fraternity had been moved by the report on the work of the sisters given by Fr Timothy Radcliffe OP, former Master of the Order, following his visit to Iraq in Dec. 2017 (read the full report on Fr Timothy’s visit).

For more information about the reconstruction programme and to donate, visit the Nineveh Reconstruction Committee website.