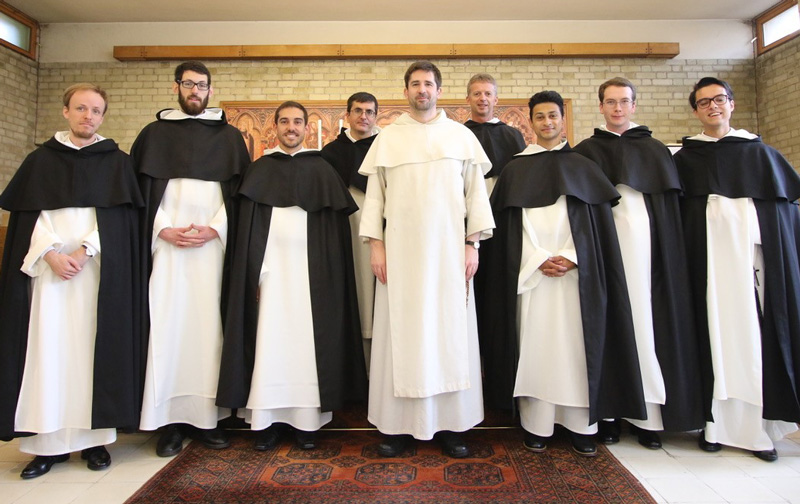 As the academic year begins again, the English Province welcomed six novices, and received the simple vows of four brothers who now commence their formation for ministry.

At noon, Saturday 23rd September, surrounded by family and friends, and having completed their noviciate,  four brothers made the vow of Obedience in the hands of Fr Martin Ganeri OP, the Prior Provincial of England: 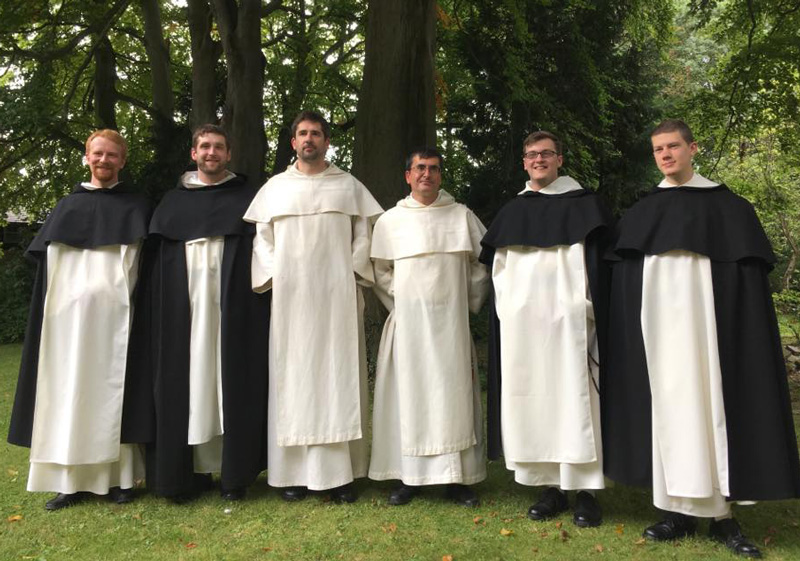 Fr. Martin preached: ‘The fundamental characteristic of a Dominican vocation is to be a servant of the Word, the Word that is Christ.’ Expounding what it means to be a servant of the Word, Fr. Martin focused on a well-known motto of the Order ‘contemplari et contemplata aliis tradere’ or ‘to contemplate and to hand over the fruits of that contemplation to others’. He went on to explain what, in practical terms, this looks like for a friar preacher. Read Fr. Martin’s full homily.

Kneeling before the Provincial, with their hands inside his, and the book of the Rule and Constitutions resting on top, the brothers made profession:

‘I, brother N.N., make profession, and I promise obedience to God, to blessed Mary, to blessed Dominic, and to you, brother Martin Ganeri, Prior Provincial of the Province of England, according to the rule of blessed Augustine and the Constitutions of the Friars Preachers that I will be obedient to you and to your successors for three years’.

Obedience in the Order of Preachers encompasses the evangelical counsels of Poverty and Chastity. It is that total commitment which one gives to God in His service.

After making their profession the scapulars of the newly professed were blessed and sprinkled with holy water, as a sign of their consecration and service.

After the liturgy, packed with specially chosen readings and favourite hymns of the friars, a great reception was held at the priory to celebrate, where family and friends ate and made merry well into the evening.

More photos of the simple professions: photo album on Facebook.

Reflections by the simply professed brothers:

I found two moments very moving in the profession Mass. The first was the prostration which takes places immediately before the moment of profession itself. As we were lying, side by side, in front of the Altar, I had the distinct sense that my whole life had been working up to this moment. The joys, sufferings, successes and failures of my life were all being consecrated to Jesus and handed over in my own offering of myself to Him. And Jesus was receiving this offering with utter joy.

The second was the faith and joy of the brothers and lay people who came to pray and celebrate with us. As we processed into Mass, all voices were united in the praise of Christ, who is the focus of our life. It is difficult to describe how much we have all been dependent upon the prayers, so often hidden from us, of those who love and support us. And these people were also being consecrated with us.

Making profession was a very special moment. The day brought me many blessings. After a week spent in retreat and witnessing our new novices’ clothing, we promised obedience to God, St. Mary, and St. Dominic, and to give ourselves fully to the prayer and work of the Order for three years. I was very glad to see family members and friends on this important occasion, some of whom had travelled quite a distance for the occasion, and others I had not seen for a long while. Having just moved to Oxford, I now look forward to starting my studies along with my three fellow newly professed brothers.

To be able to lay down my life totally and unreservedly for the One I love, for God, for the salvation of souls, that’s what the profession meant to me. It was a very emotional experience, to lie on the floor, requesting God’s mercy and that of my brothers: a physical enactment of the laying down of one’s life. To place your hands into the hands of the Prior Provincial is a physical sign of putting your life into the hands of another and vowing obedience.

What really hit home in the liturgy was the immense gift I had been given. This wasn’t something I was doing for God but something He was doing for me because He loves me and wants me to be eternally happy. He wants me to go to heaven, to flourish as a human being, to help others to get there too and this is how he would fulfil that desire – through my participation in his grace.

For me, the most emotional moment of the liturgy was the offertory as I realised what I had just offered to God: it was the realisation that I was formally entering into my home, my family, into the Order that I belong in, or at least that will get me to the heavenly home where I belong. Dominicans have given me that sense since I first met them, so there is a deep joy in knowing my future is giving to this vocation. 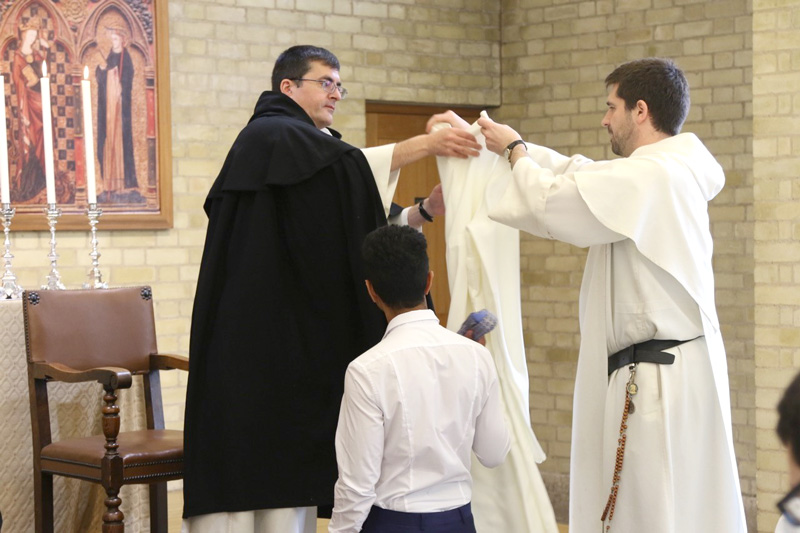 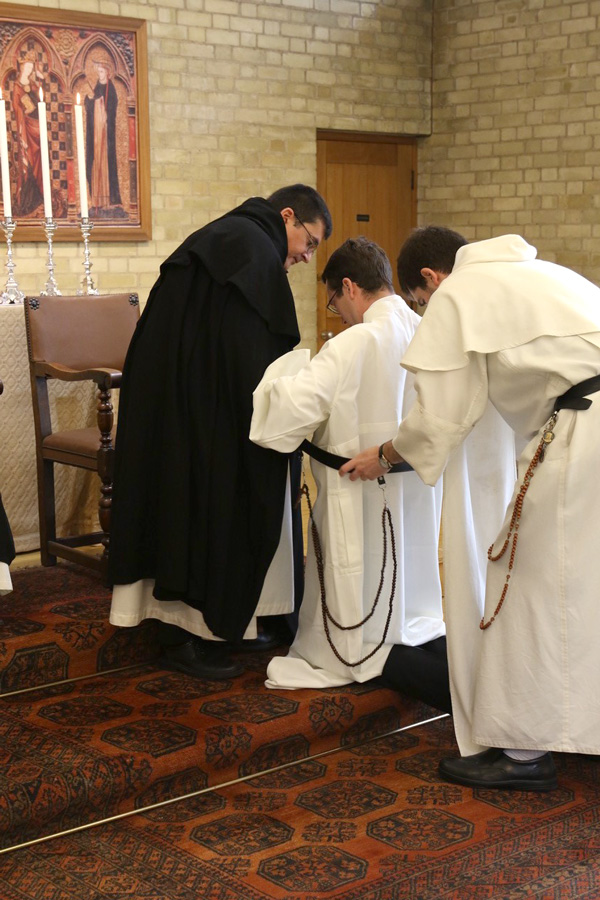 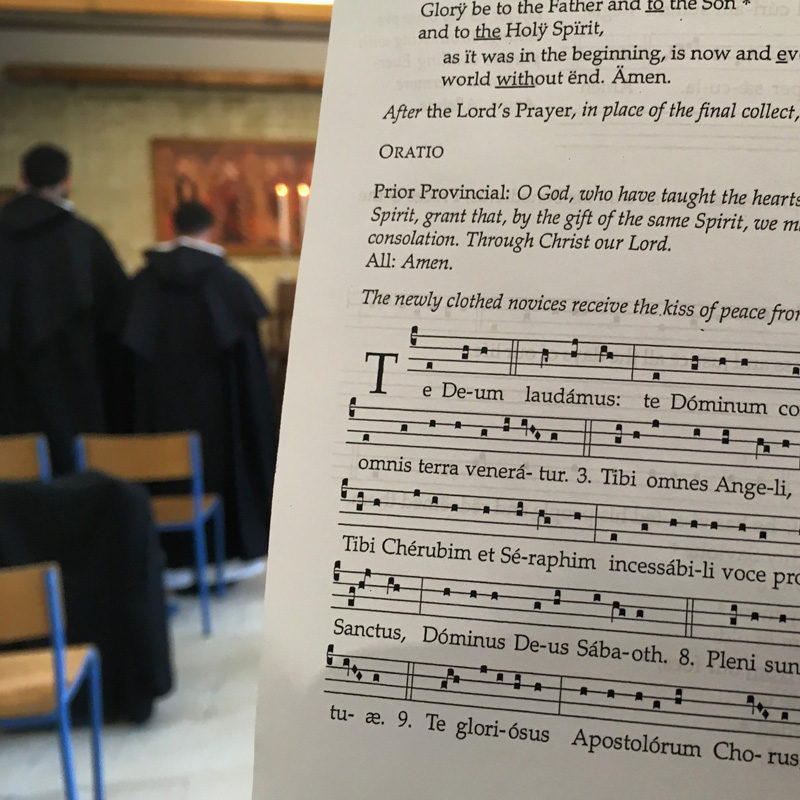 If you think God may be calling you to follow him in the Order of Preachers, do not hesitate to email our Director of Vocations, Fr. Nicholas Crowe OP.

How you can support

The formation of the friars is entirely funded by the Training Fund of the Province of England. We are extremely grateful to all those who have donated to it in recent years, and welcome further gifts. Donate online.

Please pray for the newly clothed novices and our newly professed brothers, and those responsible for their formation.