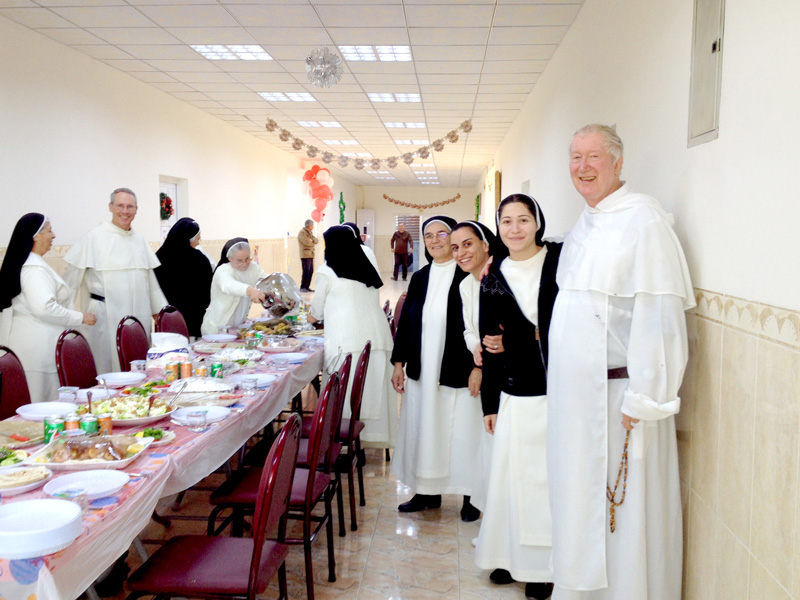 Signs of Hope in the Desert

In the last three years, I have visited the Middle East and the Maghreb several times: Algeria, Lebanon, Syria, Egypt, Turkey and Iraq. Some of my friends are unenthusiastic about these trips, convinced that I will never be seen again.

I love to go because it is in such tough places that my hope in the Lord is renewed. God says, ‘I will lead you into the wilderness and speak there to you tenderly’ (Hosea. 2.16). Being with our Christian brothers and sisters in such wildernesses, I overhear the tender words the Lord speaks to them. So I was happy when the Iraqi Dominican Sisters of St Catherine invited me to spend two weeks with them before Christmas. I was accompanied by a Texan Dominican, Brian Pierce.

The Acts of the Apostles claims that ‘residents of Mesopotamia’ (Acts 2.9) were present at Pentecost. There have been Christians in Mesopotamia ever since. Sometimes they have been tolerated; when Baghdad was a centre of intellectual vitality, they were active participants, but they have increasingly endured vicious persecution, as in the terrible massacres of 1915 when 126 of the 250 priests present in the country were killed, and seven of the Iraqi Dominican sisters. For the last hundred years, Christians have wondered how long it will be possible for them to remain. The Jewish community, which had flourished here for two and a half thousand years, has disappeared. Will we be next to go?

Return of the Refugees

The last time that Brian and I visited Iraq was in 2015, after the irruption of Da‘esh had precipitated the flight of hundreds of thousands from Mosul and the plain of Nineveh to Kurdistan. Then the priority for our brothers and sisters was care for the refugees. The brethren established two camps, called The Vine and Hope. Now Da‘esh has been defeated and the new challenge is the return home. Many fear to do so, since Muslim neighbours whom they had considered friends turned out to sympathise, at least initially, with Da‘esh, and took over homes and shops that belonged to Christians. When we talked to them two years ago in the camps, many said that after such betrayal they could never return again. Collaborators with Da‘esh have shaved off their beards and melted back into the community, confident that Da‘esh will return.

But despite these threats, the sisters have gone back, emboldening others to go home too. A teacher said to us, ‘If the sisters are there, we can be too.’ On the way to the plain of Nineveh, we saw long queues of lorries carrying away the remains of shattered Mosul. 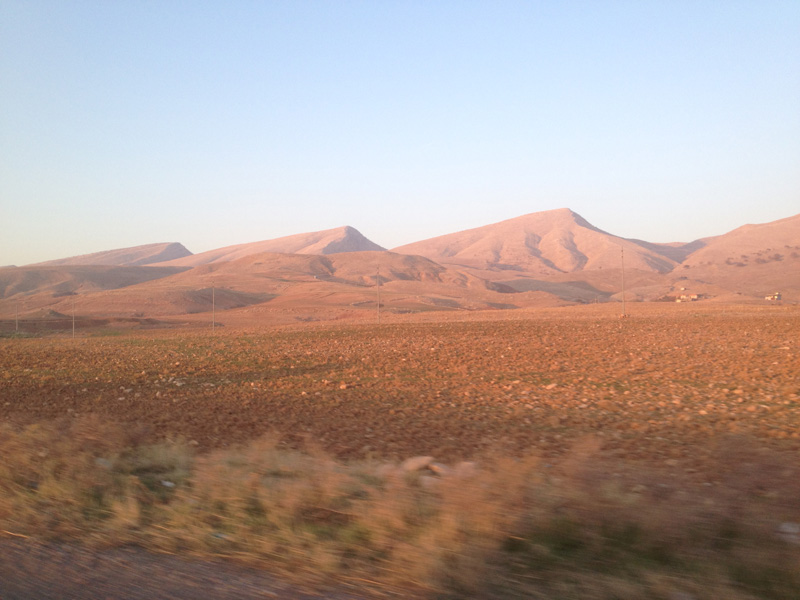 On the way to Kirkuk

Lorries removing the ruins of Mosul

As we entered the territory recently retaken from Da‘esh, there are innumerable check points, manned by Shia Muslims soldiers, Christian soldiers and even Iranians. No one trusts anyone else. Yet when they saw the sisters in habit, usually we were waved through. One soldier shouted, ‘Let through the saints!’

Rebuilding the Schools, Educating for the Future

Most of our schools on the plain have been blown up by car bombs. The sisters’ immediate priority is to rebuild them. 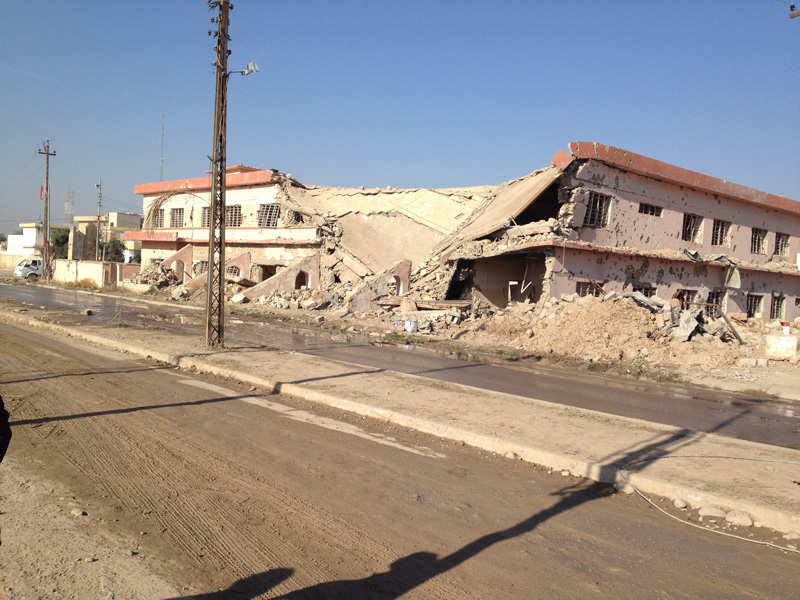 The destroyed Dominican school in Qaraqosh 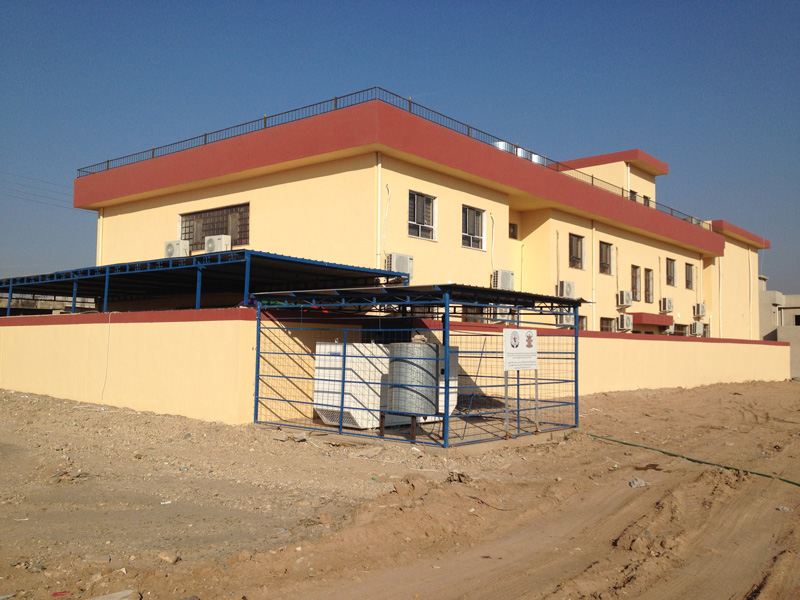 The new Dominican school in Qaraqosh

The walls of the Dominican school in Qaraqosh, the main centre for Christians on the plain of Nineveh, were decorated with the children’s pictures celebrating the homecoming. 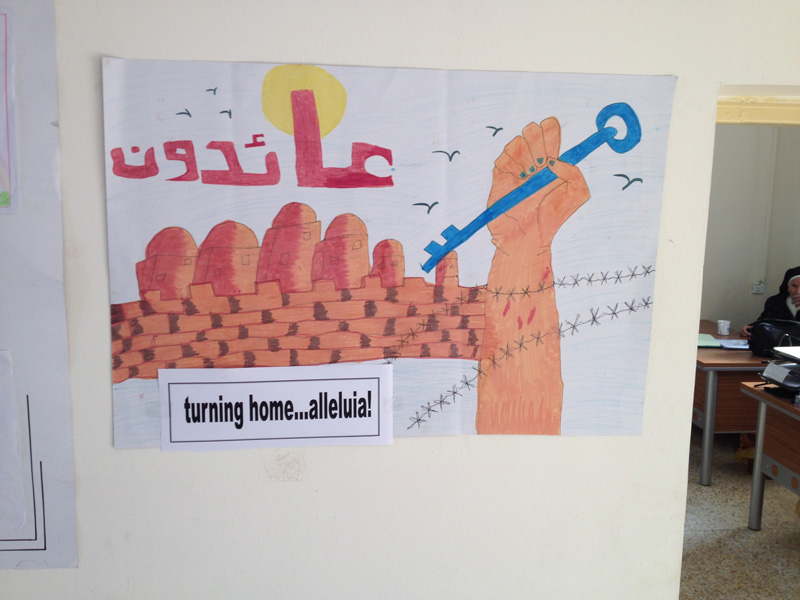 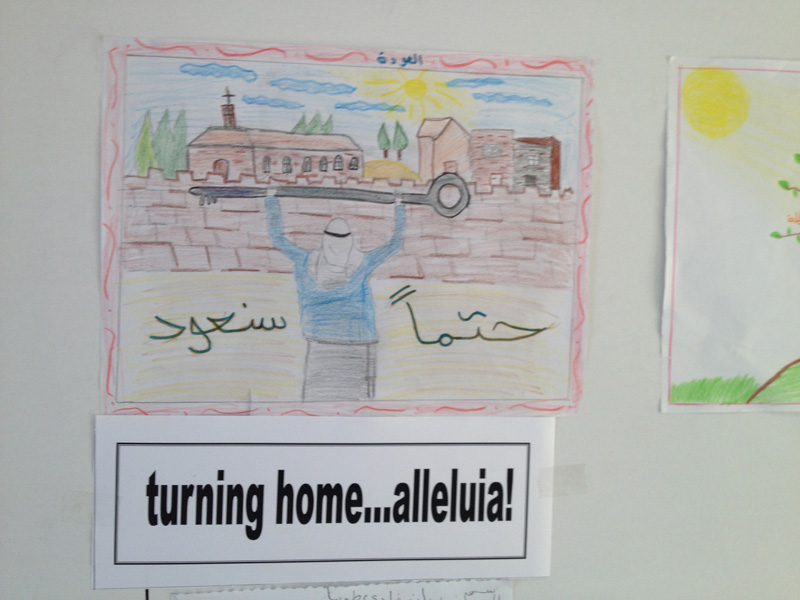 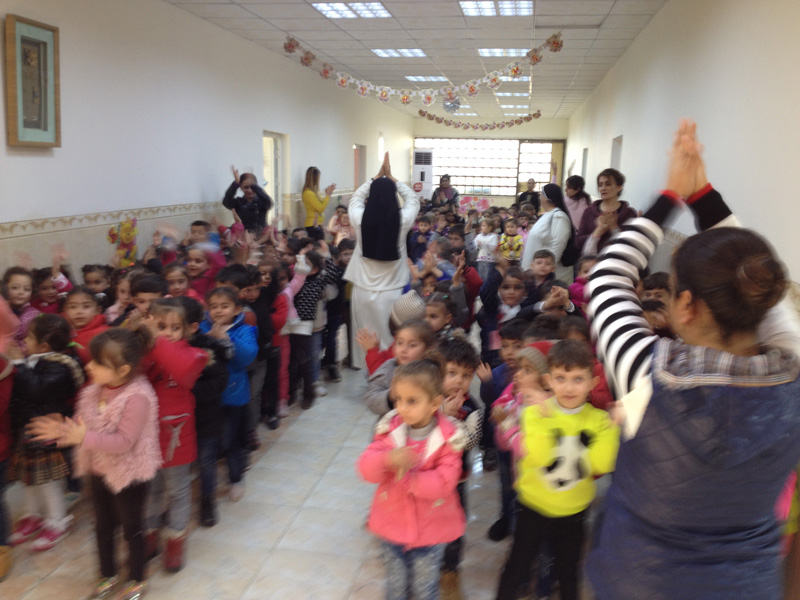 A third of the population have returned. The reconstruction of the convent must wait. There can be no delay in getting the children back into the classrooms. For the time being, the sisters live in threes and fours in the houses of their families and friends.

We visited several schools and received an uproarious welcome from the children. But many were nervous of any noise and showed signs of exhaustion and stress. The Iraqi education system is collapsing and so everyone wants to go to the Dominican schools, Muslims and Yazidis as well as Christians. Often the sisters experience love and appreciation, but sometimes the Muslim parents and teachers are just waiting for the sisters to go so that they can take over.

Yet it was here, in these small kindergartens and schools that we found fragile signs of hope. In the Dominican school in Baghdad, with 80% Muslim children, a group of sixth-formers assured us that their friendships transcended religious divisions. ‘We are all the same’, one young girl claimed happily. I hope that they will come to love the differences and learn from them, but even so this bold statement is a small tender plant of mutual love in this desert of violence. When a sister was unable to give the Christian children their catechesis, a Muslim teacher took the set book from the shelf, and gave the class herself: ‘I would not want them to miss a class.’ Of such small incidents may a new Iraq be born!

Some sisters are now beginning to teach again in the University of Mosul: science, music, graphic art etc. They go in civilian clothes, but are harassed and taunted, especially by young men from the south who assume that they are immoral. But they go on teaching! It is typically Dominican to believe that the best response to mindless religious violence is education. Teaching the young of all ages to think together subverts the power of simplistic slogans to foment violence, whether these come from local religious teachers or Western politicians.

The maternity ward of one of our hospitals in Baghdad is presided over by Sister Bushra who supervises the birth of some thirty babies a day. She is known as ‘the Mother of Iraq’. 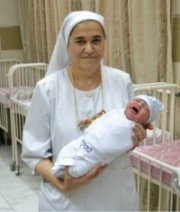 Again, some of the staff are waiting for the Christians to go so that they can take over this well-equipped hospital. But mothers of all faiths gathered in the ward and shared their joy in their newly-born babies. Who knows what fruit these friendships may bear?

One of the most deeply moving moments was a visit to our brother, the Archbishop of Kirkuk, Yousif Tomas Mirkis OP. Kirkuk is on the fault line of so many tensions because of both its geographical location and its oil. It is the place of potentially explosive encounters between Kurds and Arabs, Christians and Muslims, Shia and Sunni. We visited a hostel for university women students run by the sisters. Da‘esh had burst in hoping to capture them. Fortunately, the eight girls present had just time to hide under their beds and listen for seven hours as the terrorists described what they would do to them. 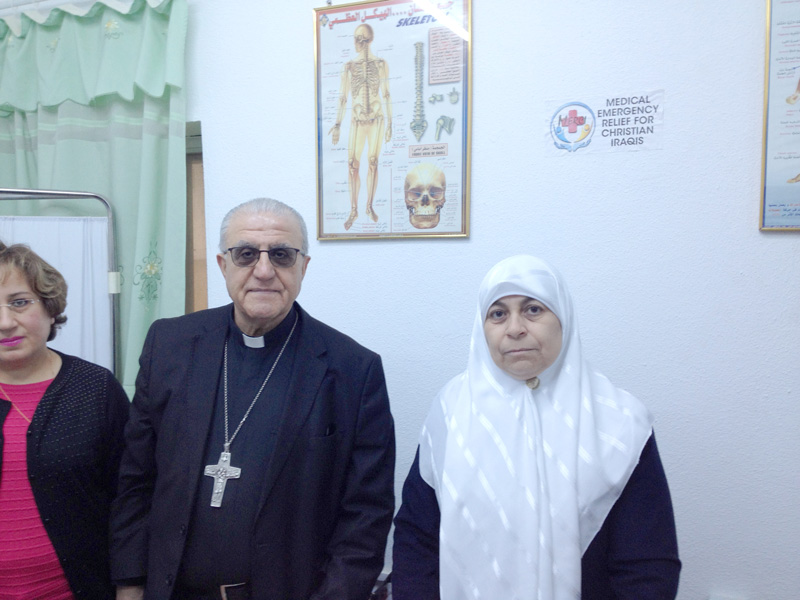 Archbishop Mirkis at our multi-faith clinic 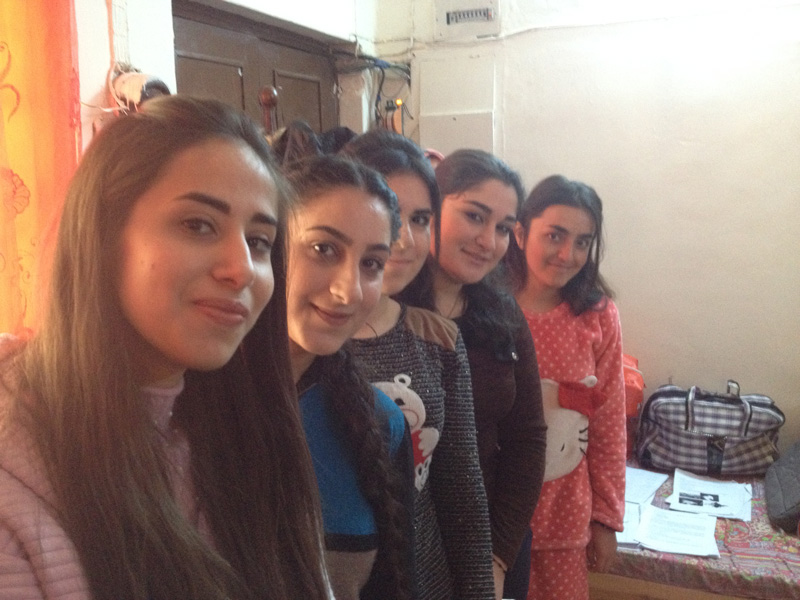 Christian, Muslim and Yazidi students at our hostel

The door of the sisters’ convent on the other side of the road is covered with bullet holes, after the failed attempt of Da‘esh to enter.

The Archbishop, with his small number of priests, half of the number we have at Blackfriars in Oxford, has ambitious plans to build a Christian quarter where they can be safe, with a school, a church and perhaps even a university. At its centre is a garden, one of the few we saw in this desert land. Trees line the streets, a small green place in the desert. Such bold ambitions for the small Christian community in this uncertain time is truly astonishing.

Everywhere, the sisters feasted us. In Qaraqosh, mutilated by violence, we gathered to celebrate our return with the national dish of baked carp, lamb and utterly delicious rice. The first time that I came to Iraq in 1998, the sisters had been unable to bake me a cake because of a lack of ingredients due to sanctions, and so they danced the baking of an imaginary cake. This time there was food as well as a joy that spoke powerfully of their confidence in the Lord.

While we waited in the military fortress that is Baghdad airport, five of the six flights announced were for Teheran. All the women queuing for these flights wore the full hijab or burqa, a sign of how Iraq is drawing closer to its Shiite neighbour. But no woman was so dressed on our flight back to Turkey, and on to the West. The sisters could take that flight, like so many others, and make a home in a safer place, but they remain. Their faithful abiding with their people is also a sign of hope in the Lord whose last words were: ‘Behold I am with you until the end of time.’ (Matthew 28.20)

If you wish to send a donation to assist the sisters, please contact our development office, development@english.op.org.