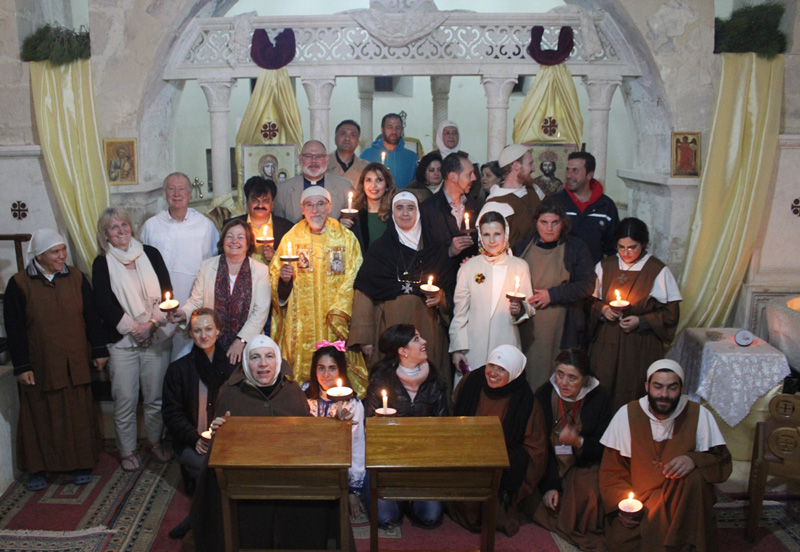 Timothy Radcliffe OP, Director of the Las Casas Institute, has just returned from a special visit to Syria with an international peace delegation.

I was invited by Mairead MaGuire, who jointly (with Betty Williams) won the Nobel Peace Prize in 1976 for her work in Northern Ireland, to join a small Peace delegation to Syria. We were Christians, a Hindu, and a few agnostics. I leapt at the opportunity to go. For me this was, above all, a chance to show some solidarity with Christian communities, among the oldest in the world, who felt deserted and forgotten.

Our base was a Carmelite monastery in the mountains, half way between Damascus and Homs. It was about three miles from the frontline with ISIS. Sleep at night was difficult because of the artillery fire. We met government officials, imams, bishops, opposition leaders, religious communities, and ordinary people in the street.
I was deeply struck by the profound friendship between Christians and so many Muslims. In the village just below the monastery, Muslims came to the Catholic Church to celebrate the birth of the prophet and Christians went to the mosque to celebrate Christmas. Yes, that way around! As I had seen in Baghdad, Muslims were putting up Christmas trees as a sign of their closeness to Christians. In Tartus we visited the first mosque ever to be dedicated to Our Lady, and the imam there sung the sutra from the Qur’an that is in her honour. We had a day with the Melkite Patriarch who was overjoyed at our visit, and who is a close friend of the Grand Mufti of Syria, with whom we had a couple of hours.

It is hard to discern the true situation of Syria. The West has its own narrative, in which the President, Bashar al-Assad, is seen as a cruel tyrant who must be removed from power as soon as possible. Nearly all the people with whom we talked had other narratives. People feared an imposed regime change even more than Daesh. They had seen how in Iraq and Libya this had led to chaos and the flourishing of terrorism. As Dominicans, we know that the truth is to be arrived at patiently and humbly, listening attentively all voices. I was saddened, returning to the UK, by the simplistic certainty with which so many politicians write of this complex country.

The atmosphere is saturated with violence. In Damascus people carried around AK 47s as if they were umbrellas. Homs was virtually destroyed. We visited Maaloula, a Christian village in which Aramaic is still spoken. Before we could have breakfast we were hustled into cars and driven away at speed. We had been spotted by al-Nusra Front, an affiliate of al-Qaeda; an attack was imminent.

Everywhere, Christians and Muslims are labouring to produce reconciliation, at the risk of their lives. I slowly became aware of how much this violence magnifies upon a terrible screen the violence that is so pervasive of Western gun culture. I went to see Spectre, the latest James Bond movie, shortly after my return. This is the sort of film that the jihadists love. But Bond’s final act was to throw away his gun. We shall only defeat Daesh if we heal our souls of violence.

The photos below were taken during the visit by Brother David of the monastery of St James the Mutilated.

Fr Georges tells how this the Church of St Michael’s was sacked by terrorists, and restored. 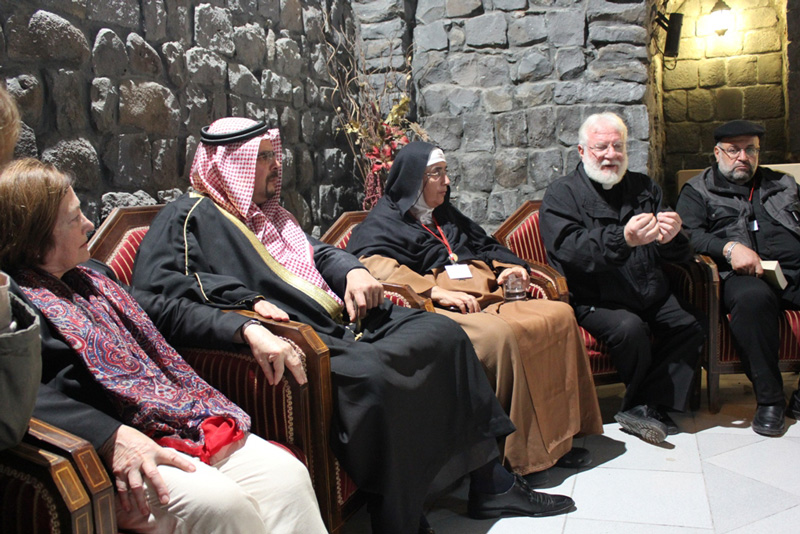 Speaking about reconciliation at the Syrian Catholic church in Homs. 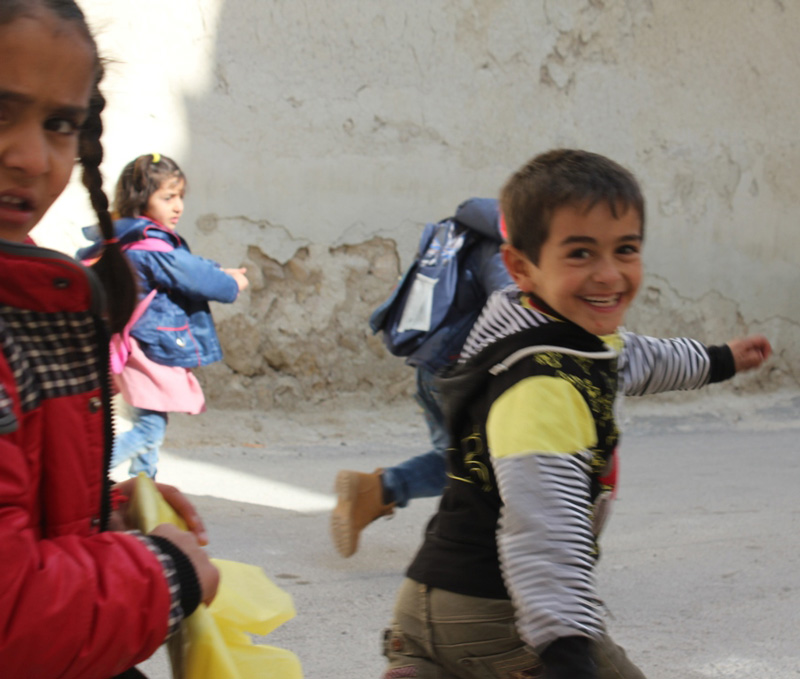 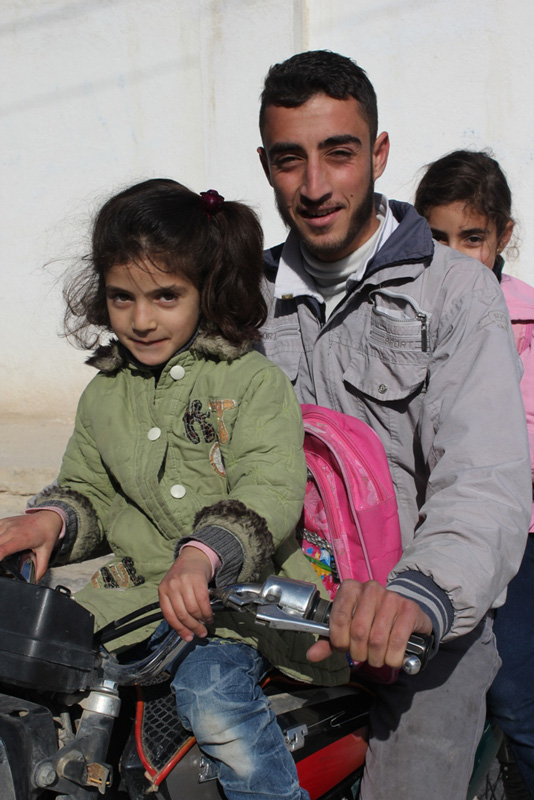 A family on a motorcycle in Qara. 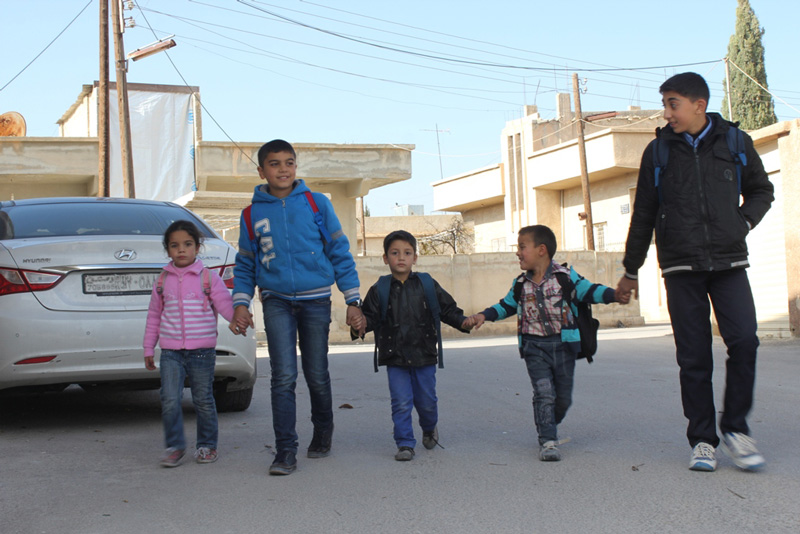 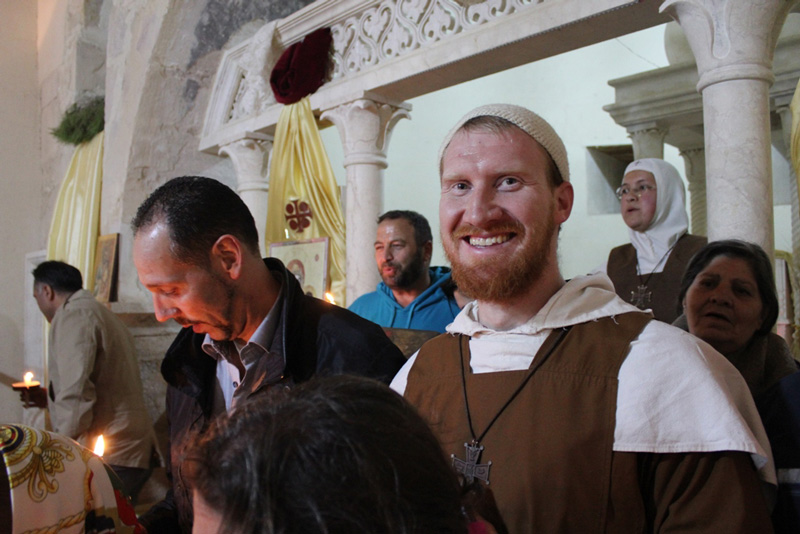 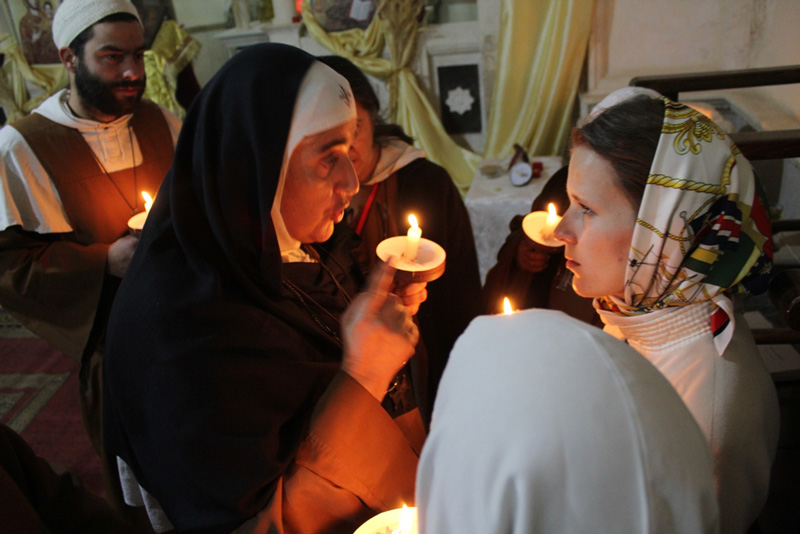 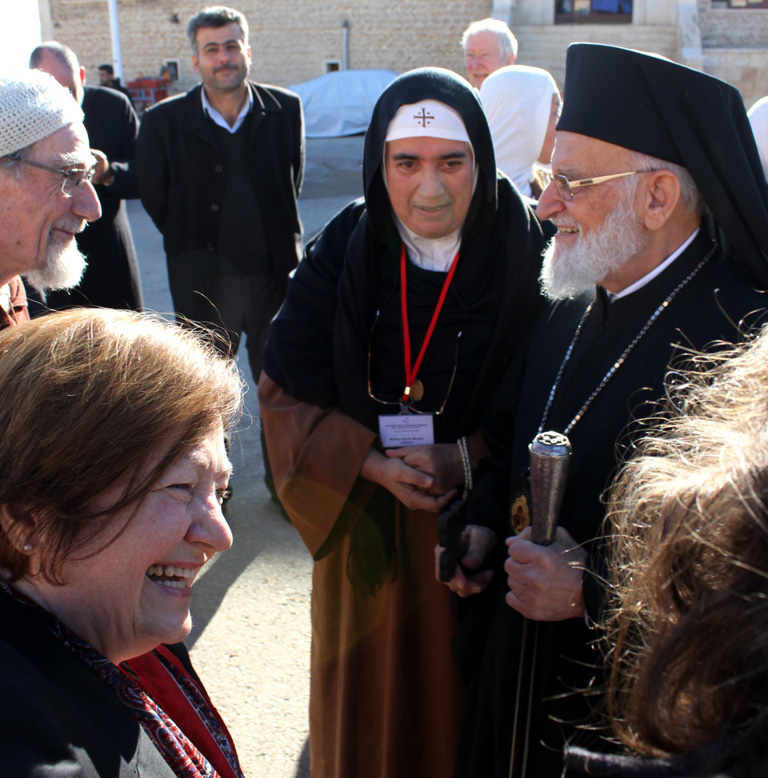 A visit from Patriarch Gregorios III. 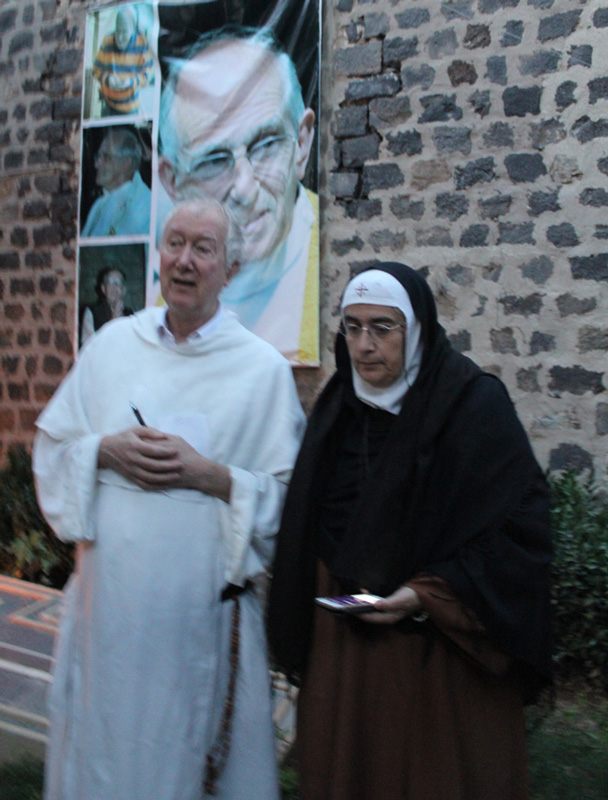 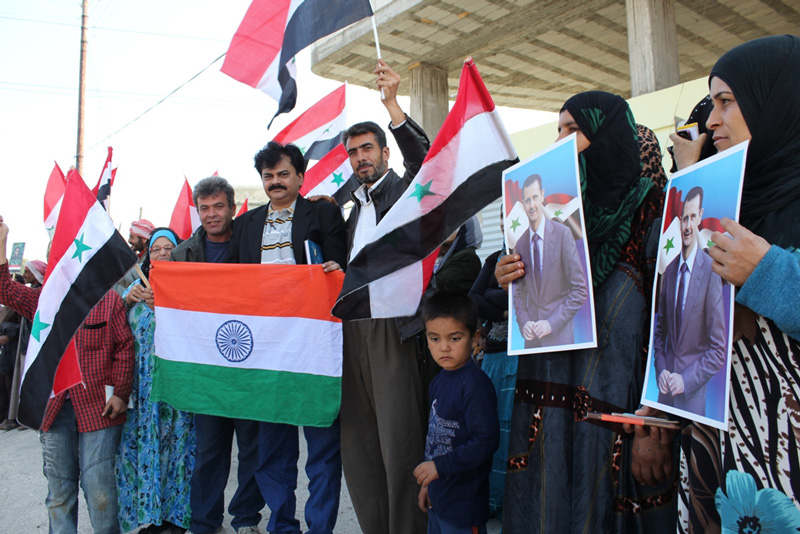 Fruze and Indian delegate in solidarity with Syrians. 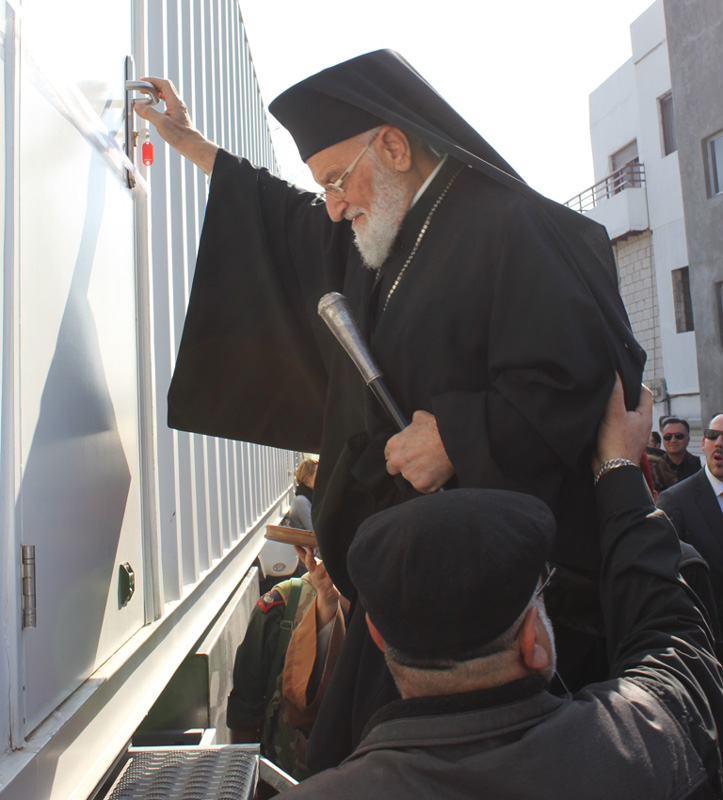 The Patriarch blesses a mobile hospital donated from Holland. 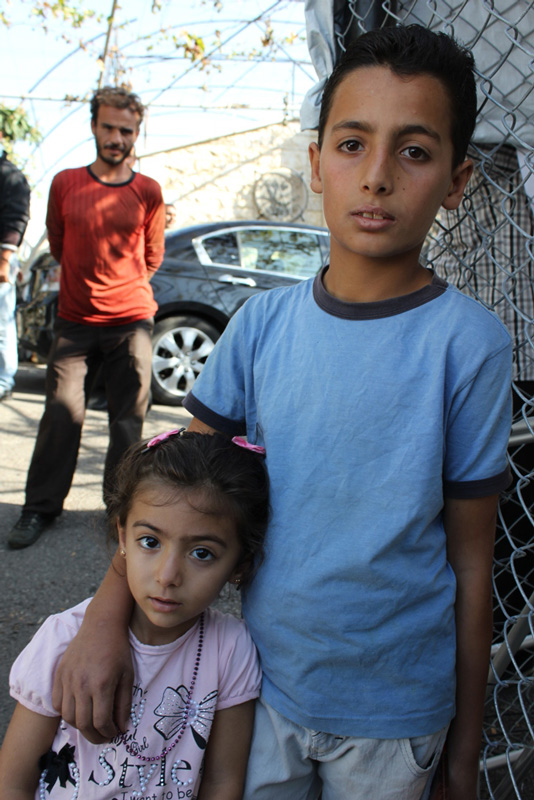 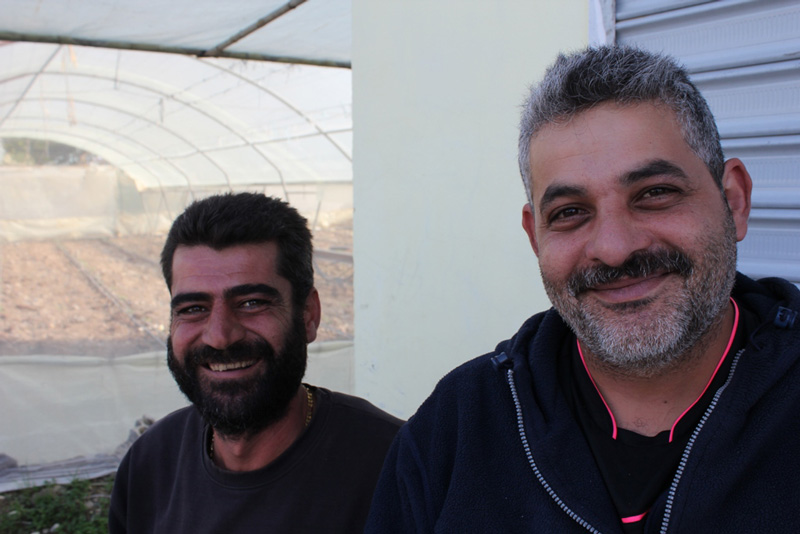 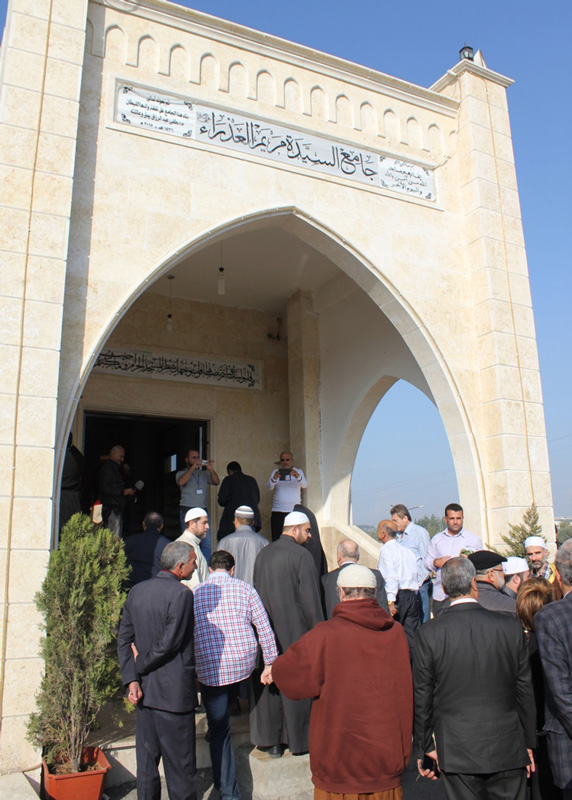 Visiting a mosque in honour of the Virgin Mary with the Patriarch. 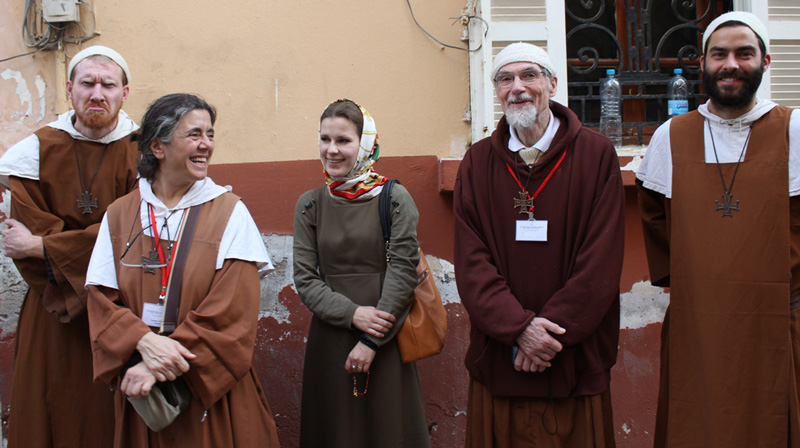 The delegates joking around.

Nobel laureate Maguire receives a Qur’an from a sheikh who works for peace. 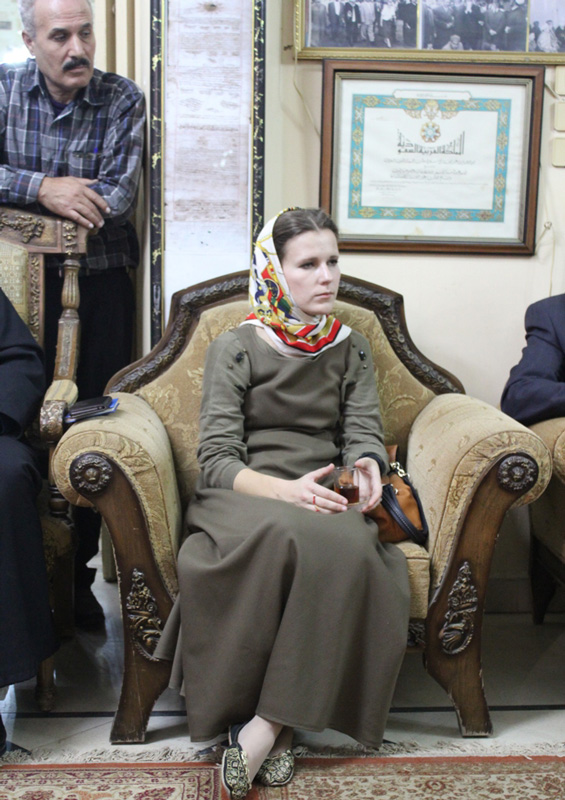 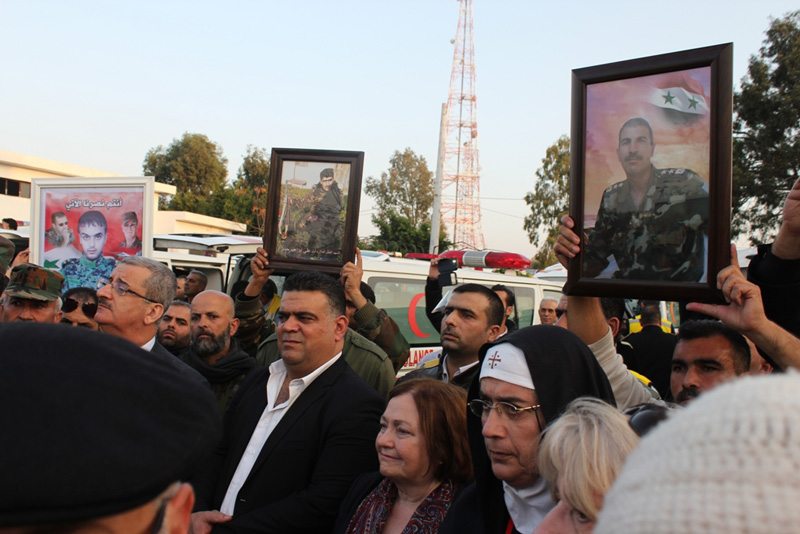 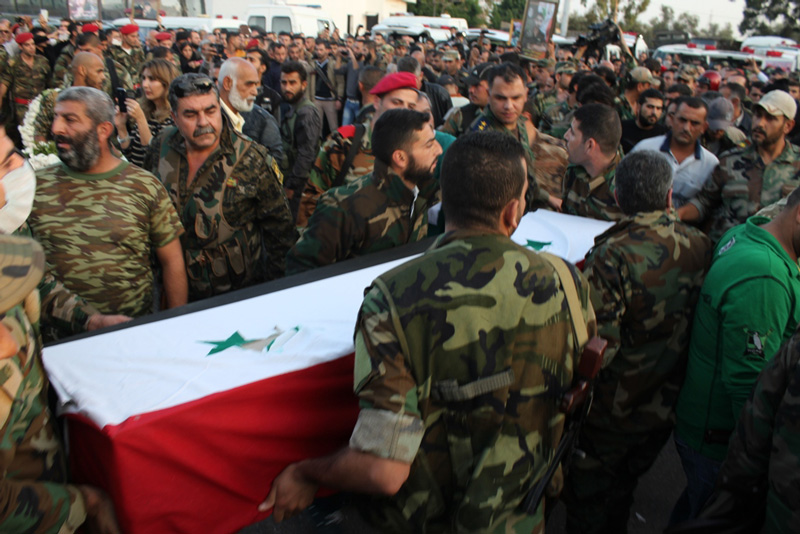 Coffin draped with a flag. 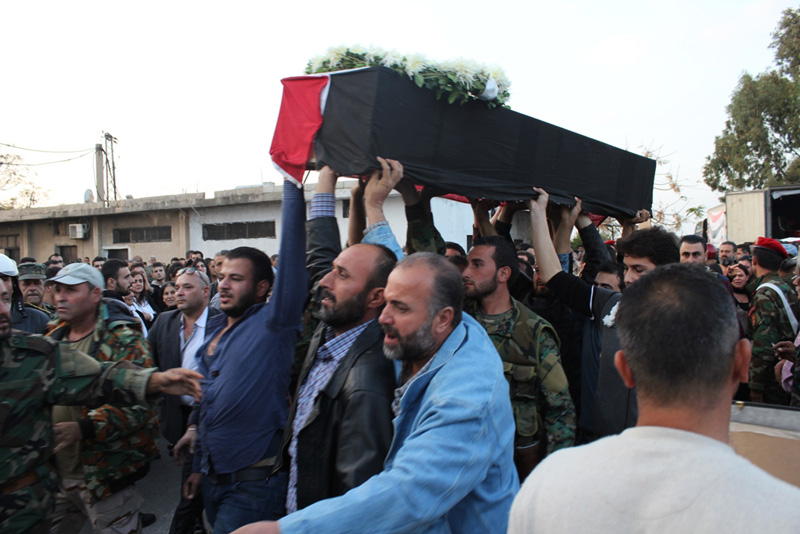 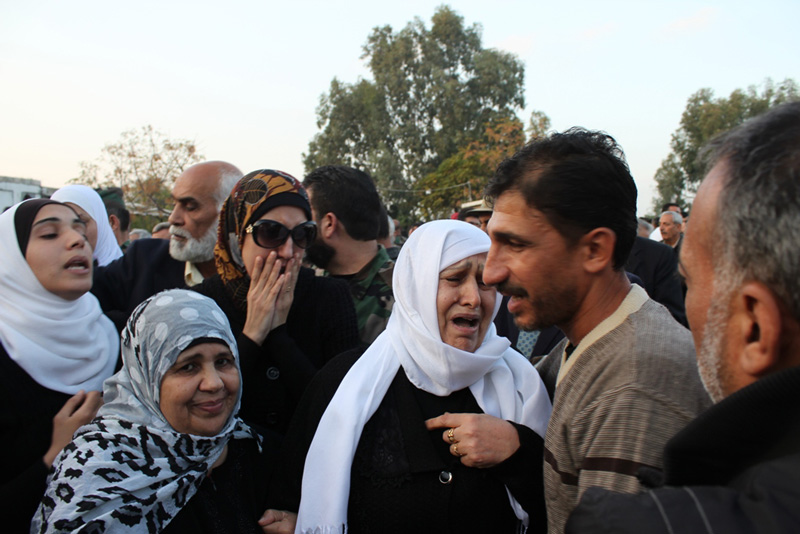 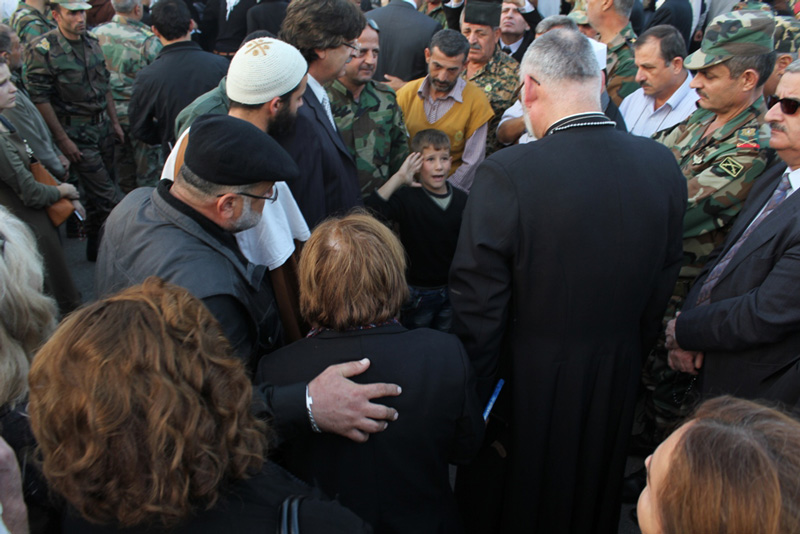 A boy salutes his father. 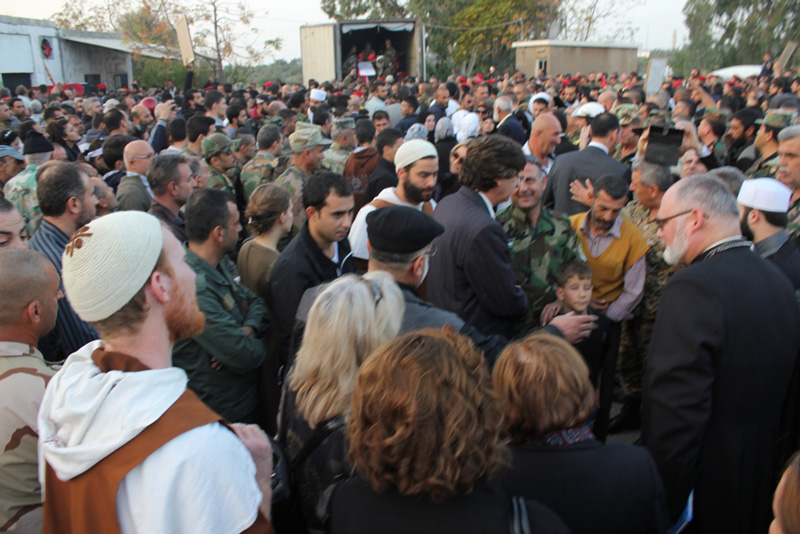