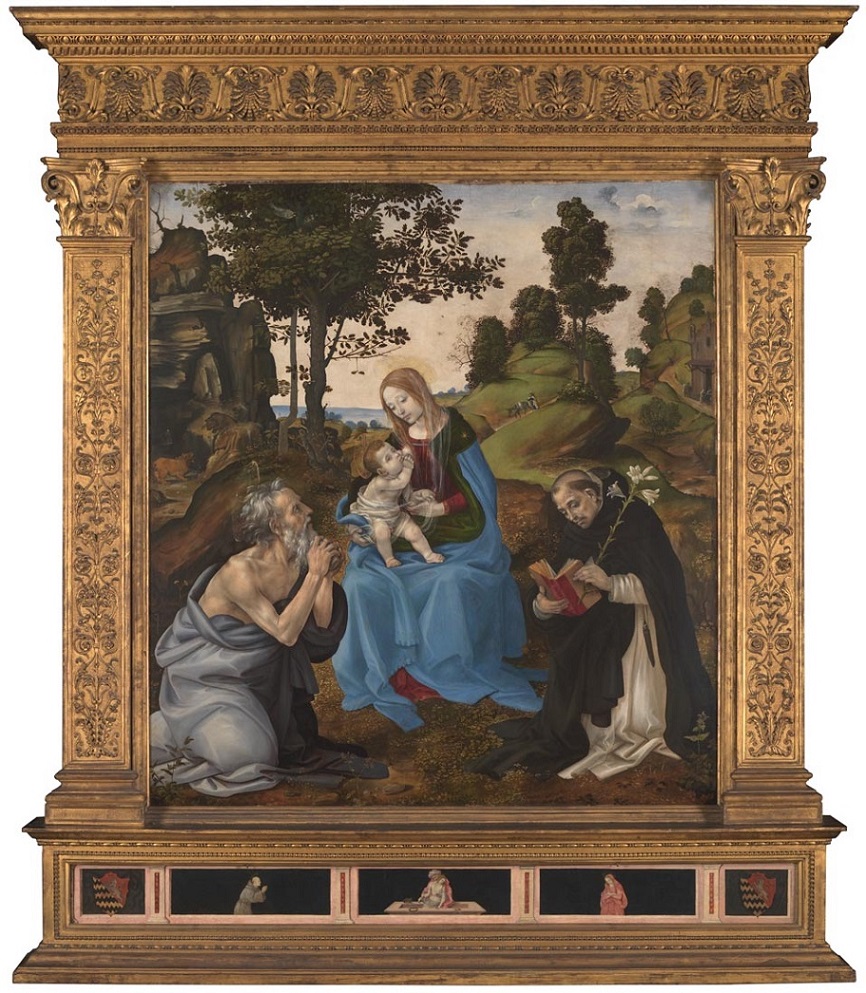 The Word Made Visible

Fr Dermot Morrin OP writes a weekly meditation on sacred art for the newsletter of St Albert’s in Edinburgh where he is based. We asked him to share his insights with us on a much-loved painting in the National Gallery collection in London.

I have known this painting for many years, but recently, I was struck by just how odd St Dominic’s behaviour must look to some gallery viewers. Despite such august company, he has his head stuck in a book! True, his friars do tend to be a bit on the bookish side, but surely no book could surpass the chance of enjoying the Virgin and Child’s company.

On the other side of the painting, and in strong contrast to St Dominic, a penitent St Jerome gazes at the mother and child with very visible devotion. Behind him we can see his pet lion in the act of chasing a bear away from the mouth of the cave. Deep inside and almost hidden from view, the saint is also doing penance. There is an oak tree growing behind St Jerome and the Virgin. In its branches a bird is feeding her young. In the far distance, a man moves downhill with a pack animal. Could this be St Joseph? Is this the familiar scene of the Holy Family at rest during the flight to Egypt? If so, St Dominic seems to be oblivious. What book could be so good?

Behind St Dominic, there is a building with people going in and out. In fact, it is a kind of hospital or dispensary. This altarpiece was painted for a side chapel in the Church of San Pancrazio in Florence. Originally, it was part of a larger religious foundation which included the dispensary. This is the very place that the Dominican friars lodged when they first arrived in Florence, and it is even documented that St Dominic went there to clothe a brother in the habit.

Lippi underlines the association of St Dominic with this place of healing by adding a little leather sheath on his belt. It contains a set of the instruments that an apothecary or herbalist might use. Around St Dominic’s feet Lippi has added various specimens of what are no doubt medicinal herbs. So is it a book about herbal remedies? Well, I think not. Our clue is in the presence of St Jerome who said that ignorance of scripture is ignorance of Christ. The book that so engrosses St Dominic must surely be his favourite, the Gospel of Matthew. In the centre, we see what he sees with his mind’s eye. I suspect we are meant to understand that he is reading the passage from St Matthew about the flight into Egypt.

This painting is an altarpiece, so it acted as the backdrop to the celebration of the Eucharist. Lippi reminds the viewer that just as the Virgin nourishes her child with her milk, so God nourishes us by his Word and by the Sacrament. St Dominic and his followers are sent to preach the Gospel. Lippi’s Dominic reminds us that it is done primarily by contemplating the scriptures and then handing on the fruits. In the scriptures, the prophet Isaiah once declared, ‘Behold, a young woman shall conceive and bear a son, and shall call his name Immanuel.’ In the Gospel of Matthew we are told that this name means God-with-us. It is by such familiar truths that the great seasons of Advent and Christmas will bring healing to our woundedness, and nourishment for the year ahead.

‘The Virgin and Child with Sains Jerome and Dominic’, Filippino Lippi, c.1485.

A high-resolution image can be viewed online at the National ­Gallery’s website.