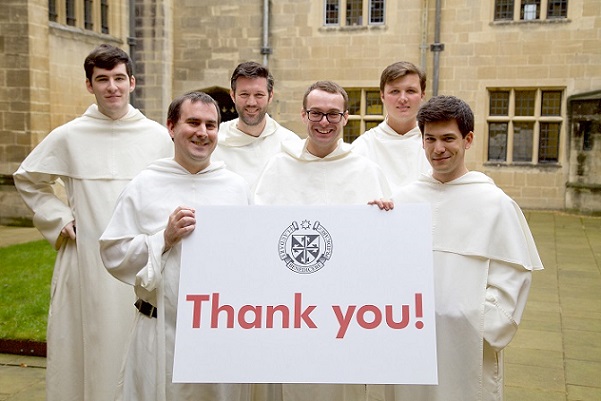 Our Development Director, Richard Brown, gives an update on our fundraising.

When six young men joined the English Province’s noviciate in Cambridge last September, it became obvious that there was an urgent need to achieve the £1 million goal we had set to raise for the Training Fund, and if possible to go beyond it.

I am delighted to share with you the very good news that the last few months have seen further generous gifts and legacies, adding to the bedrock of support from regular givers. One generous donor in particular wanted to give us a ‘bit of a boost’, as he put it, and offered a major gift to bring us over the target. But he doesn’t want us to stop there! One reason for this is that the friars’ apostolic work across the Province responds to pastoral needs rather than seeking to maximise income, and as a result the different priories are very under-funded. A second reason is that there is now a growing likelihood that the Oxford priory will not have enough rooms in a few years’ time to accommodate all the friars during their six years of formation. This is one of several challenges that we will have to address in the run-up to 2021 (the 800th anniversary of the friars’ arrival in Oxford).

Pope Francis, in a speech marking the closure of the Dominican Order’s jubilee celebrations, recalled the importance of preaching which enables men and women to be ‘light and salt, doers of good works… and true brothers and sisters who glorify God, and teach others to glorify God, by the good works of their lives’. Thanks to your help, the English Province is increasingly well placed to live out this fundamental mission.

Like to help? Make a general purposes donation today to the Friars and we will assign it to our areas of greatest financial need. You can even set up online a recurring payment via your credit or debit card. Donate now.