A Cry of Joy

Easter Sunday. Fr Gregory explains how the exclamation ‘Allelluia’ is a basic reaction in joy to the Risen Lord.

Alleluia! If there’s one word that characterises our Easter celebrations, it’s this. We’ve been holding off from using it for the whole of Lent just so that we can apply it with renewed intensity to our celebration of Christ’s Resurrection. It gets sung back and forth three times by the priest and congregation at the Easter Vigil as we take it up again, and it’s stuck on the end of various parts of the Mass of the Day, from the Introit on the way in to the dismissal at the end. This ‘Alleluia’ permeates the whole of our Easter celebration – it gives it its character, its mood.

But just what does it mean, this ‘alleluia’ that expresses our celebration of Jesus’ resurrection from the dead? The word does have a meaning – it comes from a Hebrew word that means ‘praise the Lord’ – but Christian tradition hasn’t translated it, leaving instead the sound that obviously lies behind the Hebrew word for ‘praise’: the sound of cheering, or, to use a technical term which reproduces the same kind of noise, ululation. This great cry of ‘alleluia’ is like the roar of a crowd at a football match when a goal is scored: it says something more basic and more immediate than the explanation of its significance that comes in the post-match analysis which puts into words what happened in the match. A supporter of Manchester City can explain all the significance for Liverpool of this or that goal, but only a Liverpool supporter could have cheered when the goal was scored.

And today, when we celebrate the fact that Jesus, whose death on the cross we commemorated on Friday, has risen again, we cry ‘alleluia’ because we are cheering the fact that he’s won. He has proved stronger than death, that final, common enemy of the whole human race, and so, in Christ, our “team” – the whole human race – has won. We can spend the rest of the year thinking about all the implications of that victory for us – of how exactly we relate to Jesus and his victory, of the love and power of God it reveals, of the life with God it promises. Indeed, that is what we do, for, as Christians, it is our belief in the Resurrection of Jesus that lies at the foundation of all that we believe. As St Paul tells the Romans (10:9), ‘if you confess with your lips that Jesus is Lord and believe in your heart that God raised him from the dead, you will be saved.’ And of course, the deeper our understanding, the more we will be able to appreciate the significance of the victory we celebrate. Today, though, we don’t get that far. In fact, in our Gospel reading, we don’t even get as far as encountering the risen Jesus: the empty tomb and the folded grave-clothes are enough to prompt this outburst of joy.

Joy, though, is not the only emotion the sight of the empty tomb could prompt. For Mary Magdalene, in today’s Gospel, it was a source of distress. What she saw was simply an absence: ‘They have taken the Lord out of the tomb, and we do not know where they have laid him.’ The difference in the case the nameless ‘other disciple’ whom we understand to be the evangelist John himself is that he didn’t just see the empty tomb, but ‘he saw and he believed’.

The joy which our Easter alleluias express is the joy of believing, that joy in the Gospel of which Pope Francis has written so powerfully in his recent Apostolic Exhortation Evangelii Gaudium. And in that text, the Pope has reminded us that our joy in believing is a powerful force, impelling us to want to go out and share the good news with others, and also a way of attracting them to share in that belief and that joy: to come back to the football match, the cheering of the crowd is something it’s enjoyable to join in with.

So as we celebrate today Christ’s Resurrection, his victory on behalf of all humanity over death itself, we renew that joy which lies at the heart of the Christian message with a cry that sums up the whole of that message: Alleluia!

fr Robert Verrill’s sermon for Holy Thursday and fr David Sander’s sermon for Good Friday can both be found on Torch. Either click on ‘Liturgical Index’ and scroll down or ‘Preachers’ and click on the picture for fr Robert or fr David. 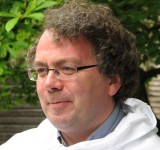