You surely know the one about the atheist professor of sociology whose wife gave birth to twins: he had one them baptised and kept the other as a control. Well, there is the other story about the professor of psychology who had twin sons, one an incurable optimist and the other an incurable pessimist. One of them couldn’t be dismayed by anything and the other could never see the bright side at all. On the night before the boys’ eleventh birthday, as soon as both were asleep, the professor crept into the pessimist’s room and filled it with wonderful toys. Then he crept into the optimist’s room and emptied several buckets of horse manure.

In the morning he went into the boys’ rooms to find out how they were getting on. The pessimist was sitting bolt upright in bed, staring suspiciously at all the presents, wondering where the catch was. The professor sighed and walked into the other room where his son was leaping about, laughing and throwing handfuls of manure in the air. “Gee, dad,” he said, “I reckon with all this horse shit about, there must be a pony!”

Zephaniah the prophet, we read from today, should have been a pessimist, because his country was going through the worst possible times, the royal court was corrupt and effete, a grasping mercantile class was oppressing the poor, this was a nation without a future: a dies irae just had to be on its way. St Paul should have been a pessimist because he was actually writing to the church at Philippi from a prison, conditions were harsh, and he was in very real danger of death. As for John the Baptist, everyone knows how he came to a sticky end.

But John the Baptist preached good news to the people, and those about to panic at the thought of a coming judgement were told to practise sharing, be content with what they had, refrain from extortion and oppression. St Paul asked fellow Christians who no doubt were also going through a hard time to rejoice, to have no anxiety but to let their requests be known to God with praise and with petition (if you are going to ask God to supply your needs, you must also learn to give thanks for all his gifts to you – bless him a hundred times a day, one of the rabbis said). Zephaniah told the discarded poor of his own land, as bleakly situated as the brave and hopeful dissidents James Mawdsley found by his side in a Burmese prison, that they had a dancing God:

The Lord God is in your midst, a victorious warrior. He will exult with joy over you, he will renew you by his love. He will dance with shouts of joy for you as on a day of festival.

At your solemn moment, insists the prophet, your God will not behave: he tempts you to this preposterous faith in his presence with you, leaping and dancing and crowing with joy. Your God is a dancing God who makes you rejoice in the face of your anxieties, your apprehension. To know this God is to be like King David dancing before the ark of the covenant. It is to be like John the Baptist who leapt for joy in his mother’s womb. It’s to be like the lame man cured at the word of St Peter who went leaping and dancing for joy at the Beautiful Gate of the Temple. It is to be like Mary, the poor woman of Nazareth, exulting in her saviour and treasuring the joyful mysteries of the nativity in her heart.

Today some people are going to pluck this homily out of the air to read it in their homes. But some are actually going to hear it: they gather for their usual Sunday Mass not in a parish church but in a gloomy overcrowded English prison. At the altar, gaoler and gaoled, parishioners and prisoners, can meet just as Christians. Peace and healing can come from the eucharist, friendship can grow between us, people can come to a sense of their worth and Chistian dignity. Instead of the voices of despair, the laughter of a dancing God who comes to renew us by his love. A new future becomes possible. Who will take God at his word? Who will come with us to be the bearers of this exhilarating hope? 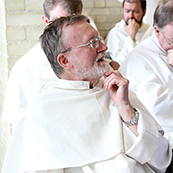