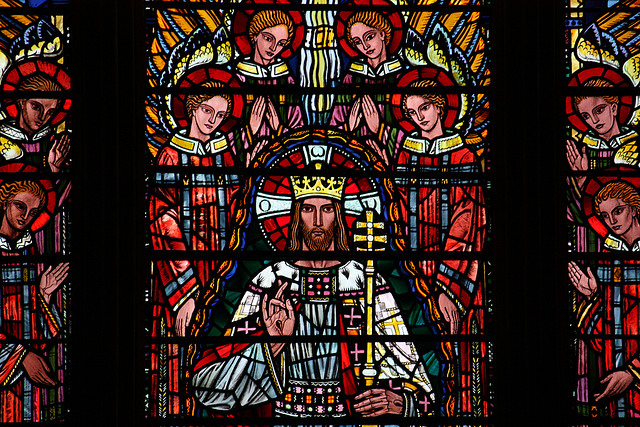 Solemnity of Christ the King. fr Robert Verrill argues that we can only understand today’s feast through our faith.

Fourteen years before the outbreak of World War II Pope Pius XI warned that “as long as individuals and states refused to submit to the rule of our Saviour there would be no really hopeful prospect of a lasting peace among nations.” These ominous words can be found in Quas Primas, the encyclical in which the Pope instituted the Feast of Christ the King.

Yet the Pope dared to hope for a brighter future in which those men and women who had spurned the rule of our Redeemer and had exiled themselves from his kingdom would hasten to return to the duty of obedience. It was with this intention that the Pope instituted this new feast.

However, given what happened in the ensuing decades of the 20th Century, we might wonder whether the Pope’s optimism was misplaced. World War II was far more devastating than the war that was meant to end all wars, and as for a hastening return to the faith, it seems that the very opposite has occurred. Has the institution of the Feast of Christ the King therefore been a failure? According to worldly standards, the answer would surely be yes. But according to the standard of faith, the institution of this feast cannot possibly have been a failure, for in faith, we understand Christ’s kingship in the light of the cross. In Christ’s darkest hours, when He was abandoned by His followers and underwent the cruellest of deaths, He revealed His eternal kingship to the world. At the time, Christ’s followers thought His crucifixion was a total disaster, but after His resurrection, they could recognize it for what it was – the manifestation of Christ’s glory. As dark as the 20th Century has been, the Feast of Christ the King reminds us to look beyond this darkness and to recognize the truth of Christ.

Christian history shows us that our hope in Christ the King is well-founded. In fact Pope Pius XI instituted this feast to coincide with the sixteen hundredth anniversary of the Council of Nicaea of 325.

The Council of Nicaea was meant to resolve the Arian controversy in which Christ’s divinity was denied. However, the first Nicene Creed seemed to create more problems than it solved. In the following years the Church went through great turmoil as the bishops struggled to defend Nicene orthodoxy. St Jerome later remarked of this period that the world “awoke with a groan to find itself Arian.” Yet in 381 at the First Council of Constantinople a new version of the Nicene Creed was composed that faithfully and unambiguously expressed the doctrine of the Trinity, and the words were added “His kingdom will have no end,” thereby affirming the kingly dignity of Christ. This is the version of the creed which we recite every Sunday at Mass. Thus, although the 56 year period between 325 and 381 was a particularly difficult time for the Church, in the end it proved to be extremely fruitful.

We might therefore hope that something analogous is going on in our own age. Indeed, Pope Pius XI expressed this hope when He said:

“We may well admire in this the admirable wisdom of the Providence of God, who, ever bringing good out of evil, has from time to time suffered the faith and piety of men to grow weak, and allowed Catholic truth to be attacked by false doctrines, but always with the result that truth has afterwards shone out with greater splendour, and that men’s faith, aroused from its lethargy, has shown itself more vigorous than before.”

Dare we hope that Pope Pius XI was right, that perhaps we are on the verge of a new era of faith? Undoubtedly, the world has seen unprecedented levels of violence and faithlessness since the first celebration of the Feast of Christ the King in 1925, and maybe there are still yet greater evils to come, but this is not beyond God’s Providence. However, we will only recognize God’s Providence if we submit to His laws and precepts and allow Christ to reign in our hearts.