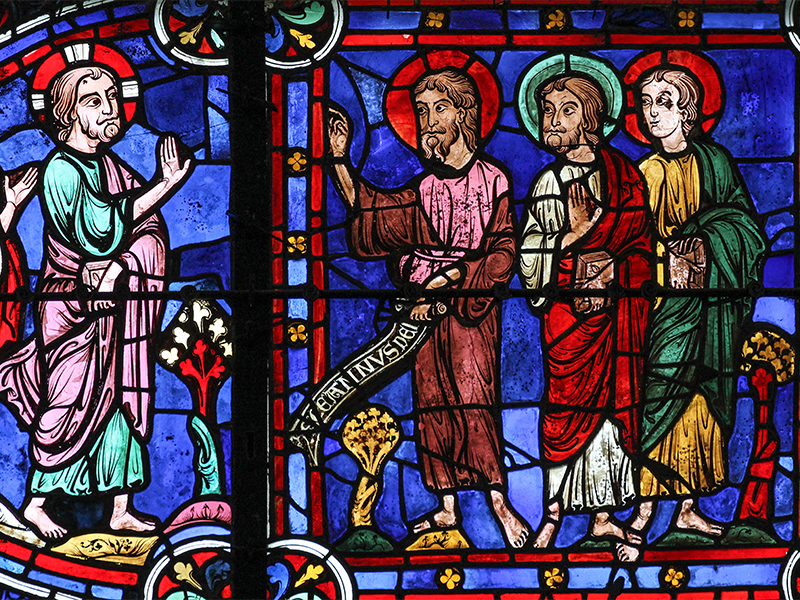 Second Sunday of Ordinary Time (B)  | Fr Colin Carr invites us to meet God, and so to be changed.

One of the greatest gifts we can give to another person is our ears. If people could listen to each other the world would be a safer and healthier place. But it’s dangerous to listen: you will be invited to share pains as well as joys; you will be disturbed as well as enriched; you will meet people, rather than just be acquainted.

God invites us to meet him, too. And to meet God is to be changed.

The story of Samuel and the story of John the Baptist’s disciples give us a vivid picture of what it means to encounter the living Word of God.

Samuel had been dedicated to God by his mother, Anna, from the moment of his birth. So he served Eli, the priest of God in the sanctuary, long before the temple was built in Jerusalem. He was asleep, heard a voice calling his name, and assumed it was Eli. It’s not always easy to tell where a voice is coming from. We certainly don’t expect it to come from beyond the range of possible people; Eli was the only possible person within Samuel’s range. It took some time even for the old man to realise what was going on, but then he realised that it was his job to help the youngster to recognise God’s voice: he had no doubt taught Samuel much; he would have regarded him as his protégé, but he had the wisdom and the humility to see that all his teaching must lead Samuel to meet the living God, not just to be a clone of Eli. Sometimes if others are to learn of God from us we have to stand aside and let them move beyond our wisdom and discover the source of all wisdom.

So Samuel was launched on the adventure of becoming a prophet of God, of hearing his word and passing it on to the people. Just as at first he didn’t know where the voice was coming from, so he couldn’t know where it was leading to; it led him down some paths he would rather not have trodden, like anointing a king who, he knew, would be a disaster for the people. It was not his job to tell God what God should do, but to obey, and to challenge the people to obey, the voice of God.

Like Eli, John the Baptist had to point his disciples away from himself to meet the Lamb of God, Jesus, the one John had been sent to announce. It must have been tempting to keep his disciples around him, to care for them and give them his wisdom; but he, like Eli, knew that true wisdom meant he had to point them in the direction of the source of all wisdom. He knew when he was no longer needed.

So the two disciples followed Jesus; they didn’t know what to expect; he asked them what they wanted, and they said “Rabbi, where do you live?” It might seem an odd question, but it was perhaps a way of saying that they didn’t quite know what they wanted but that in meeting Jesus in his own place they hoped to find whatever it was that they had to find. We don’t know what went on between them; simply that they spent the rest of the day with him; but that convinced Andrew that they had found God’s anointed One, the Messiah, the true servant and messenger of God. And it was a find he could not keep to himself, so he brought his brother along, and Jesus saw who Simon was and gave him his real name. In a sense this is all we need to discover from God – our true name, our true identity. The encounter with God will change us and challenge us, give us a name and identity which we might not have chosen for ourselves. Like Andrew and the other disciple, Simon came without his own agenda, without deciding beforehand what he wanted or who he thought Jesus might be: he was open to hearing his voice, and the voice called him and gave him his new name. And the one who named him said, at the end of John’s gospel:

I tell you, when you were younger, you used to fasten your own belt and go where you wanted. But when you grow old, someone else will fasten a belt around you and take you where you would rather not go. Follow me.

If we come to Jesus without our own preconceived ideas and agenda, we will hear the truth, we will encounter a love and a joy we would never have known if he had not named us: and we will share his sufferings.

I think it’ll be worth it.

Photograph by Fr Lawrence Lew OP of a window in Chartres Cathedral.