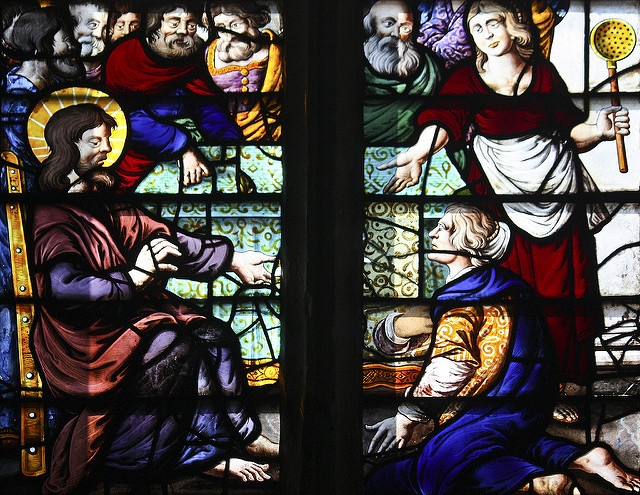 At the Feet of Jesus

Sixteenth Sunday of the Year. fr Dermot Morrin shows us how Mary understands the true meaning of hospitality.

It is while Jesus is on his way to Jerusalem that Martha receives him into her home. Like anyone on the road he is in need of food and lodging. In offering him hospitality Martha shows her goodness and her generosity. As we can see from the first reading in this way she is truly a daughter of Abraham who is quick to offer hospitality to the wayfarer. In the gospels, often Jesus is invited to meals, but the welcome he receives varies. Sometimes it is less than it might be, as for example, in the case of Simon the Pharisee (7.36-50).

These meals are often occasions when God’s plan and the secrets of people’s hearts are disclosed. When you invite Jesus to your home things happen! In this passage we learn something about Martha and about Mary and perhaps see ourselves in them. However, this story is remembered because it teaches us about discipleship. Pondering Martha and Mary can help us to see how we should respond when he calls out “Follow me”.

St Luke has told us that Jesus had set his face towards Jerusalem because the time was drawing near for him to be received up (9.51). This journey the context of the encounter. The Lord we follow is always the Risen Lord who made his way to Jerusalem where he was crucified, died, was buried and was raised on the third day.

At the start of this journey, Jesus had sent out messengers ahead of himself to a Samaritan village but the people there would not receive him precisely because he was on his way to Jerusalem (9.53). By contrast, Martha puts great effort into welcoming him as he goes there. We don’t know if she understands what the journey is about and how it will end, but we do know that like St Luke she addresses him as Lord, a title that implies a degree of faith in Jesus. We don’t know when her faith in Jesus would come to fullness. But it is there.

Both Mary and Martha are among the many disciples whom Jesus gathers as he makes his way from town to town. He is the sower sowing a seed that will find in some hearts the good soil where in time it will take root and flourish.

Having passed on from the Samaritan village, St Luke tells us that later on Jesus sent out seventy disciples in pairs “into every town and village where he was to come” (10.1). They were to accept the hospitality that people offered and to eat and drink what was provided (10.7). Perhaps the sisters Mary and Martha had welcomed a pair of these disciples. Perhaps in that encounter the seed took root. Perhaps they were expecting that one day the prophet these disciples called “Lord” would come to their village and they would be ready to receive him into their home. This may be why Martha can address this stranger as “Lord”. What is clear is that in both sisters the seed has taken root and is beginning to grow.

Mary sits at the Lord’s feet and listens to his teaching. It is the classic pose of a disciple. For this she is praised and indeed blessed. Earlier in the gospel, just after Jesus told the parable of the sower, they tell him that his mother and brothers have arrived. He replies, “My mother and my brothers are those who hear the word of God and do it” (8.21). A bit later on, after today’s gospel scene, a woman in the crowd will cry out blessings upon the womb that bore him and Jesus will respond, “ Blessed rather are those who hear the word of God and keep it!” (11.28) This is Mary’s beatitude. While it is Martha who receives him into her house, it is Mary who knows how to welcome him. She knows the kind of hospitality he seeks.

Mary knows that we do not feed him, but rather, it is he who feeds us. We do not prepare a banquet for him, because it has already been prepared by him and it is for us. He does not sit at our table but rather it is we who sit at his table. Mary knows that real discipleship must begin and flow from a seat at the feet of Jesus listening to his word. This is where our journey must begin if we are to truly follow the one who sets his face toward Jerusalem. Then he will be Lord of our hearts and there will be the joy of having oh so much to do at his behest.

The image above is a stained glass detail by Van Linge is in the chapel of University College, Oxford.