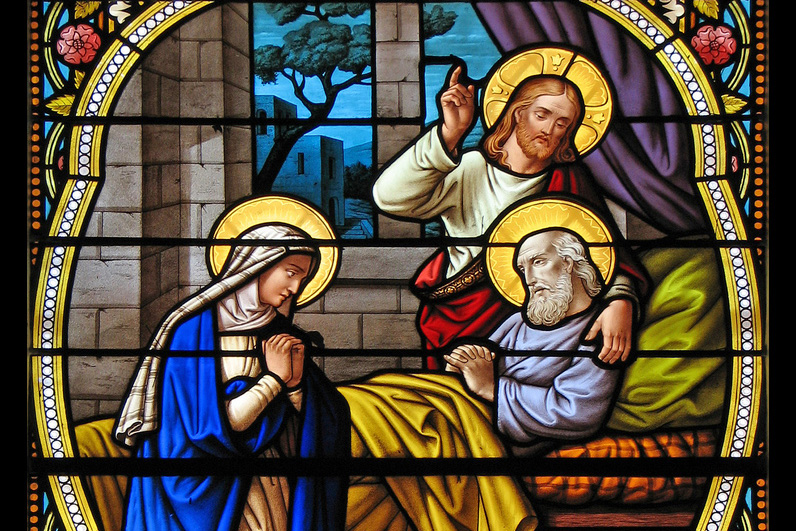 Thirteenth Sunday of the Year  |  Fr Timothy Radcliffe rejoices that Jesus leads us from isolation to communion and friendship.

Two women alone in the middle of crowds! The first woman is older. No one else is mentioned in her story except the doctors who were no help. She is isolated because of her flow of blood which would make her ritually impure. She is an anonymous figure in the crowd which is pressing against Jesus, pushing and shoving, to get near to the great man. For them she is nobody. But she sees in Jesus someone who can restore her, if she can but touch him. Suddenly there they are, looking at each other, and he speaks the healing word, ‘Daughter’. She is healed not just in her body but from her utter isolation. She has got back her life. She can go in peace.

Then there is the young girl whose isolation is different. She too is in a crowd of people, who are wailing and weeping and making a commotion, but she is the centre of the tumult. Everything revolves around her, but her isolation is more radical in her seeming death. Movingly, Jesus goes to her with just her own family and his closest disciples. The mob is left behind. She is restored to those who love her.

The first reading tells us that ‘God did not make death, nor does he rejoice in the destruction of the living. For he fashioned all things that they might have being.’ Jesus here is the Lord of Life. He has come so that we ‘may have life and have it abundantly’. (John 10.10) Sickness undermines our lives in many ways. Like the older woman, it can make us disappear from society. Going out to shop can be a laborious challenge. It is easy to lose touch with friends and relatives. They have their own lives to live and may not have much time for us. Loneliness is a vast affliction for millions of older people who may go days without speaking to anyone. Life seems to leave them behind.

Then there is the more radical loneliness of death, which has cast its shadow over the young girl. As death draws near, we can feel radically alone, even when we are surrounded by those who love us. In this gospel, Jesus heals both, giving the one back to herself and the other to her family. These are two dimensions of the same healing, for it is only in belonging that we can have a life that is our own.

The drama of today’s gospel foreshadows the great battle that lies ahead when he will bear all our loneliness and overcome it. On the cross he will again be surrounded by another mob, baying for his blood and ridiculing him, just as this earlier mob ridiculed him for saying that death had not taken the young girl as its prey. To be mocked is to feel utterly vulnerable and solitary.

On the cross he will bear all the isolation of the sick, the depressed, people afflicted with failure or isolated in any way. Because he has done this, we believe that our own moments of loneliness are not final. He is with us as he was with the lonely woman and gave her back her life.

In his dying, he will know the most radical solitude of all, foreshadowed in the girl in the coma. He will lie in the coldness of the tomb until on Easter Morning he will be given back to his closest companions, as she was handed back to her family. In the garden, the women who loved him will be astonished and their mourning will be turned to celebration.

So loneliness need not crush us. We can face illness and death with joy because we share them with the Lord of Life. I went to see a friend of mine a few weeks ago who was confined to her bed and near death. She talked of her joy in life and of her love of dancing. One of her daughters was present and executed a small dance. She talked of champagne shared on her death bed and of what eternal life would be like. We laughed and were happy, because not even death will destroy our unbreakable communion. The Lord has turned to us too and said, ‘Daughter’, ‘Son’, ‘Sister’, ‘Brother.’

Photograph by Fr Lawrence Lew OP of ‘Jesus and Mary at the deathbed of St Joseph’. Stained glass window in the parish church in Lourdes, France.